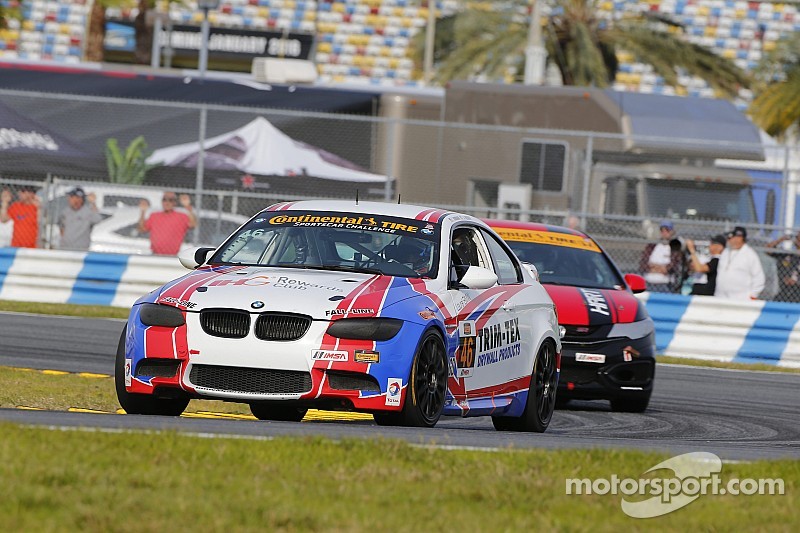 Teammates Corey Lewis and Al Carter were unable to start the race, but Trent Hindman and Ashley Freiberg had a solid run.

Daytona Beach, FL - Fall-Line Motorsports finished just one position off the podium last weekend at Daytona International Raceway as Trent Hindman and Ashley Freiberg took the checkered flag in fourth place in GS for the BMW Performance 200. Teammates Corey Lewis and Al Carter were unable to start the race after a crash in the morning warm-up that left their racecar with significant damage that couldn't repaired in time for the race.

The defending Continental Tire SportsCar (CTSC) Champion (Hindman) and defending Daytona race winner (Freiberg) had a solid run in the race after they started in 6th position. Freiberg started the race and drove all the way up to second before pitting for a driver change. Hindman turned the third fastest lap in the closing laps in the 2.5-hour race.

Trent Hindman: "I thought it was a solid run, I'm a little bit angry at myself because I knew we could have caught Lawson (Aschenbach) at the end. It was still a great fight. I knew we had the car in the infield to catch him but those things (Camaros) are just monsters coming off the corners. That definitely made it difficult to pass. At the end of the day, everyone did an incredible job. For us to get the lone BMW in the field up into the top-five, I think that's a great accomplishment. A huge thanks to Mark Boden, Michael Harvey, and everyone at Fall-Line for giving us a great racecar and flawless pit stops all day. Thank you to Trim-Tex and IHG Rewards Club for making this possible today."

Ashley Freiberg: "I am pretty proud of our race. We are looking at this with a long term view which is to win the Championship, so fourth place is good for points. The team did a great job with pit stops, and Trent drove well. The car was handling really well, we just don't have the straight line speed due to all of last season's BOP adjustments, which is kind of frustrating, but I think we gave it everything we could. I have to give huge thank you to IHG Rewards Club, BMW of North America, Trim-Tex, and Fall-Line Motorsports for their support and for a solid start to the 2015 season. I am looking forward to what Sebring will bring us!"

Al Carter: "It was great to be united with the whole Fall-Line crew at Daytona. Our #48 BMW was stout rolling off the truck. We qualified strong and though the racing gods didn't allow us to get the debut we had hoped for, make no doubt that Corey Lewis is an amazing young racing talent and this #48 team will shine at Sebring. A huge shout out to teammates Trent and Ashley for all their help and support and congrats for their strong race finish."

Corey Lewis: "Daytona did not turn out as we had planned. The Fall-Line Motorsports crew did an amazing job preparing the car, and my co-driver Al Carter qualified us at P10. Unfortunately, I made an error in morning warm up causing damage to the car that could not be repaired in time for the race. My focus in now on Sebring, and getting the result I know we are capable of. A huge thank you to Amped Apparel, Monticello Motor Club, and the Nila Agency."

Michael Harvey, Team Manager: "It was a bittersweet day for the Fall-Line Motorsports BMWs. Unfortunately, the #48 incurred damage that precluded it from racing but the #46 had a strong race to finish 4th. The result was a great way to start the year especially as the strategy, pitstops, and performance from all was flawless; 4th was better than we could have hoped for today. A big thank you goes out to IHG Rewards Club and longtime partner Trim-Tex. We are excited to move onto Sebring and continue our pursuit of a Championship for Fall-Line, BMW and all of our partners."

Next up is Sebring International Raceway on March 20.