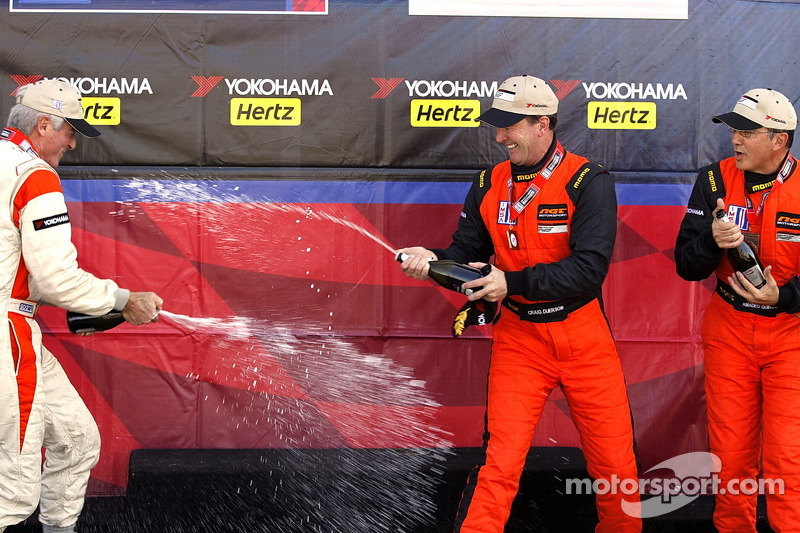 Elkhart Lake, Wisc., (Aug. 11, 2013) - Both the Wisconsin weather and the IMSA GT3 Cup Challenge by Yokohama Round 10 racing proved unpredictable this morning on the 4.048-mile, 14-turn Road America course during an epic doubleheader weekend of sports car warfare.

Cloudy skies rapidly turned to a steady drizzle only minutes away from the green flag, forcing competitors into a delayed start. But the 911 GT3 Cup competitors flipped on their windshield wipers, hit the lights, put on Yokohama rain tires and made the race business as usual.

But the end result was far from the "norm" as Master Classman Craig Duerson of NGT Motorsport jumped into a four car shoot out for the lead nearly as soon as the green flag dropped, and swept ahead of the younger competitors in the last third of the race to capture the lead just before a final caution flag flew to land his first series victory under yellow conditions.

"My first win overall," Duerson said. "It was my goal, my goal was to finish on the podium the real podium as I call it, to show that old guys do know how to race, we have great race craft. The NGT team worked incredibly hard to get my car put back together after yesterday. It's really their win it shows their hard work I just drove."

The three young-guns stayed in the throttle despite the slick track conditions and swapped positions repeatedly throughout the rain-shortened race, keeping the excitement levels high, the competition fierce and the fans on their toes.

But it was Benitez Jr. that recovered ground from his spin-out during yesterday's competition and sailed thankfully under the checkered just behind his teammate to finish in second place.

"First of all thank you to NGT for all the support, for all the people working, the mechanics and Ramez (Wahab) and Mr. Cisneros," said a grateful Benitez Jr. "Thank you to Porsche for building us such a good car, to Yokohama for giving us a tire with excellent grip, and to IMSA for putting on a professional championship."

Starting from the BBS Pole position, Snow lost his advantage early in the race, but fought back gamely to stay in the shootout, ultimately finishing in third place on the Platinum Podium, and still carrying the points lead for the Series Championship.

"The weekend was great," Snow said. "Yesterday was a lot better, but today was still good. It was nuts out there, the track was so slippery there were people driving way over their heads out there. I was just trying to stay on the track. That was the main goal and I finished third so I think that's a great finish for right now and it still leaves me in the lead for the championship and I think that's great."

Series newcomer Santiago Creel made up for lost ground in yesterday's Round 9 performance and took his Wright Motorsports entry to top of the Gold Cup Charts this morning to take the top step on the podium.

He was followed by Franck Silah of MGM Racing, who slid down one position to finish second and TPC Racing's Michael Levitas rounding out in third.

Next up on the IMSA GT3 Cup Challenge by Yokohama schedule is the Grand Prix of Baltimore presented by SRT, August 30 - September 1, 2013. The IMSA Development Series will share the downtown, 2.04-mile, 12-turn street circuit with the American Le Mans Series presented by Tequila Patrón and the IZOD IndyCar Series.

The Platinum Masters had its share of excitement as Duerson's presence on the top step of the overall podium made a firm statement that the Master Classmen are fully capable of giving the younger competitors a run for the checkers.

All three master class finishers were within the top 10 overall in final race results.

Series veteran Kasey Kuhlman of Wright Motorsports conceded the win and slid one position to finish in second on the podium today while battling the intense conditions caused by the weather.

"You know it was tense," Kuhlman said. "I could not find the grip that I expected to find out there. After I realized that I was just kind of conservative and tried to keep it on the track and get a good finish and I feel good."

On his heels was Patrick Otto-Madsen of Ansa Motorsports who had his highest finish thus far in season competition.

"It was tough but I had an awesome car," Otto-Madsen said. "ANSA Motorsports prepared an awesome car for me and I was able to really drive as hard as I could at the limit. That allowed me to stay with the lead pack. I'm really proud of myself this is my best result so far this year and I worked hard for it and I'm looking forward to better results for the remainder of this year."

The Gold Masters kept their cool and the "TPC Boys" were once again on top of the charts and still in the points lead.

"The boys played well," said Michael Levitas. "Everybody did a great job. It was a great start. The Porsche of Towson TPC cars were just magnificent they were incredible rain cars. TPC did a great job doing the preparation. I just couldn't be prouder of the way everyone was working with each other out there. We're glad to finish where we are and glad to have the position we have."

His teammate David Williams was equally patient and brought his 911 GT3 Cup car home in second for Gold Masters in his first inclement weather event. His strategy paid off and he earned the Yokohama Hard Charger award for advancing six positions from the starting grid.

"It was actually a great race," Williams said. "First real race in the rain. So pretty tentative on the start. But just stayed patient and worked my way up. Ended up being great, finally found grip, it was out there you just had to find it."