Most of all, the four drivers representing Doran Racing wanted to finish Friday's IMSA Continental Tire SportsCar Challenge season opener at Daytona International Speedway. Unfortunately they didn't get their wish, as the Tower Events Nissan 370Z No. 41 was knocked out early by contact and the team's similar No. 14 retired with clutch problems near the midway point while running tenth in the 68-car field.

Brad Jaeger of Charlottesville, Va., clawed his way up from 15th starting position with the No. 14 after a bizarre qualifying session Friday morning afforded him only one flying lap due to a lengthy red flag. He even had to slow down during that lap when an Aston Martin spun directly in front of him.

But when the green flag dropped for the 2-hour-and-30-minute race Friday afternoon Jaeger got a great start, as he was already 11th by the end of the field's first trip around the 3.56-mile road course.

He set his fastest lap of the race on lap 4 with a 1:57.499, which was substantially faster than the 1:58.261 he ran in the aborted qualifying session. He ran anywhere from ninth to 12th place during his stint, doing his best to stay out of trouble so he could hand the car over to his co-driver, BJ Zacharias of Cincinnati, in perfect condition. Unfortunately Zacharias didn't even get to drive, because Jaeger was forced to retire the entry after completing 21 laps in what turned out to be a 54-lap race due to a problem with the clutch. 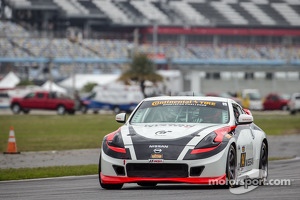 Unofficially the No. 14 ended up 28th in the Grand Sport class in the final rundown after the BMW that was originally thought to have won the race was sent to the rear due to a technical infraction.

"It wasn't the way we wanted to start the season, but we knew Daytona would be a challenge," Jaeger said. "We were shooting for at least a top-seven finish, and I think we could have accomplished that. But the clutch let go suddenly when I was gong into the Bus Stop. I got it into third gear and coasted back to the pits, but it was an internal problem and nothing that could be fixed easily, so that was it. We'll move on and focus on the rest of the season, as our goal is the championship."

The Tower Events No. 41 started 27th and finished right behind the No. 14 in class in 29th place, but it only completed one lap. Its starting driver, John Farano of Toronto, wasn't hurt but he was forced to retire on lap two after his Nissan 370Z was hit by another car, reportedly a Porsche 997 driven by Martin Barkey.

"I believe it was the driver of the No. 08 Rebel Rock Porsche that went off at the entry of the Kink and found himself four-wheeling through the infield grass," said Farano, of Toronto. "I thought I was well past him, but it appears that he kept his foot in it and he tried to re-enter the track in the braking zone entry at Turn 5. He travelled a long way through the grass and he should have kept going to re-enter safely at the exit of 5 rather than the entry of 5. I took a direct hit to the right rear with a lot of damage, taking us out of the race.

"I believe we had a strong car today and made up several positions in less than two laps. It was a very unfortunate incident that was certainly avoidable. Ultimately it took away what I think would have been a good result."

Farano's co-driver, David Empringham, also of Toronto, did not get a chance to compete in the race just like Zacharias.

They'll all put this one behind them and hope for better luck at the next event, which will support the Mobil 1 Twelve Hours of Sebring March 13-14 at Sebring International Raceway in Sebring, Fla.

"I have good memories of my last race at Sebring," Jaeger said. "I got the pole and set a new track record there in Star Mazda. That's the kind of results I want to get back to!"

"It was a tough weekend, but as the old cliché goes, that's racing!" said Zacharias. "The entire team and the guys at the shop did an excellent job getting these two 370Zs ready for Round 1 of the CTSCC. Having the smallest displacement/engine size in the field, we knew that Daytona just wasn't going to be our track with the current rules for the class.

"The BMWs had the highest trap speeds and it showed, as they swept the top six spots," Zacharias noted. "Their 7 to 10 mph difference around the oval just proved to be too much. Our realistic goals were to have a solid top-10 and escape with good points.

"In qualifying we had a red flag situation, and the tires hadn't even come up to pressure yet and an Aston Martin spun in front of Brad. He still was able to grab 15th. He had an amazing start in the race and was able to get the car up to tenth in the opening 45 minutes. Things were looking very solid for a top 10.

"Unfortunately we experienced a terminal clutch failure at the 45-minute mark and had to retire from the race.

"Overall, the whole team, including the 41 car, has gelled and it's very positive" he added.

"We're looking forward to the test at Sebring in a couple of weeks. Hopefully we'll get a little boost in performance from the series, or have some of the others cars be brought back a bit. Daytona shows a car's true power advantage, and the V8s showed their cards."