The weekend marked the first competition outing for the brand-new car.

Daytona Beach, Fla. - Stevenson Motorsports opened the 2014 IMSA Continental Tire SportsCar Challenge at Daytona International Speedway as the team debuted the brand-new Chevrolet Camaro Z/28.R. The weekend marked the first competition outing for the brand-new car, and the team emerged from the event with a huge amount of data and experience with the car.

While the weekend didn’t ultimately provide the results the team was looking for, the Daytona opener was the first step forward as the promising new entry for the GS Class looks to have an impact as the season develops. 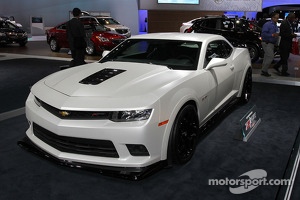 The No. 9 Camaro Z/28.R driven by Matt Bell who opened the 2.5-hour race, garnered the attention of the television cameras as it coasted to a stop prior to the green flag after having suffered a fuel leak. The Stevenson Motorsports crew made swift repairs in the garage and after a pit stop to refuel, the car returned to the fray eight laps behind the leaders.

“We had a fuel line break free before we could take the green,” said Bell. “This stuff happens when you have a new car. It’s too bad it happened during the race but you know besides that, the car was great. The handling was there. It’s one of the easiest cars I’ve driven. I kind of treated it like a test session, going out and trying to see what the car would do.”

Andrew Davis took the green flag in the No. 6 Camaro Z/28.R and held steady in the seventh slot during the opening stint. Advancing when opportunities arose in a car that he had but a handful of laps in ahead of the race, Davis was catching the back of the ST field and had moved into fifth overall position just 40 minutes into the race.

Davis brought his blue and silver Camaro into pit lane and handed the reins to longtime Stevenson driver Robin Liddell on Lap 21.

“I started to pick up some traffic toward the end of my stint which is fun because you can use that to your advantage,” said Davis of the opening run. “I was trying to get us up into the third position by the end of my stint but at the same time, my job in the first stage is to just bring the car back to Robin (Liddell) in one piece. I’ve got a big smile on my face though. Being back with Stevenson Motorsports and driving the Camaro Z/28.R is just a blast. We’ve got a good car and the best team.”

While many cars made their first pit stops and driver changes during the early portion of the second full course yellow, the No. 9 continued with Davis at the wheel in order to ensure that he met the minimum 45-minute requirement to be eligible for championship points. The yellow flag period was extended due to extensive repairs to a track wall following an on-track incident, and the team was ultimately still able to make their fuel stop and driver change under yellow, and not lose any further track position.

Meanwhile, Liddell continued to work the front end of the field and Lally was focused primarily on learning as much as he could with the new car.

With approximately 40 minutes remaining on the clock, the team’s attention returned to Liddell when he coasted to a stop near Turn 5, reporting that something in the drive mechanism had broken. Towed back to the pit, the team immediately began to assess the damage though it was clear the car would not return to competition in the day’s event.

“It was a pretty catastrophic failure,” said Liddell. “I jumped out of the car in Turn 5 where we stopped and had a look under it but all I could really see was a bit of oil under the diff. It went with absolutely no warning whatsoever, nothing, just immediate. I went to power at the exit of Turn 3 and it just, bang, big bang, then something flapping, something not happy back there mechanically, a lot of banging and clattering and that was it.”

Despite the result, Robin was upbeat about the day. “The thing was on the restarts I hustled a lot and actually had some really great battles going there. On that last restart, I think I restarted about 13th or 14th and I want to say I got five or six spots by the time I got to Turn 3, which obviously was irrelevant because by the time we got to the exit of Turn 3 I was losing them all.

In the end, it’s a new program, still in the developmental stage. The guys have worked incredibly hard just to get the two cars here and actually race this weekend. Sure, we’ve had some problems but at the end of the day the car basically has performed well.”

A final full course yellow with just over 10 minutes remaining saw the race finish under caution.

“The thing that people have to remember is that this Z/28 Camaro isn’t even in production yet,” said Team Manager Mike Johnson. “When we were campaigning the SS, there had been thousands and thousands of them built and out on the street and there had been a lot of development done to the racing car. I think there’s one street car of the Z/28 that exists in the world and they are still working on that.

So we’re working hand in hand with them to get the cars, race cars and street cars, performing at the highest level. You know the car did great at the Nurburgring, beating the others by a huge chunk of time. But to make it a real race car that can last two and a half hours versus 11 minutes or whatever the Nurburgring is, it just takes a little bit of time.”

Stevenson Motorsports will return to race action for Round 2 of the championship at Sebring International Raceway March 12-14.