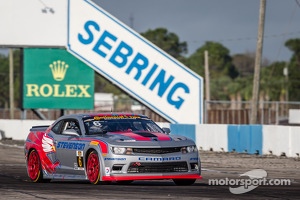 After the opening one hour and 33 minutes of the two-and-a-half-hour race was run under the green flag, a pair of on-track incidents caused much of the final hour to run under caution. In between yellow flags, Liddell went from third to first on a restart that proved to be the key to victory for the No. 6 Chevrolet Camaro Z/28.R started by Stevenson Motorsports teammate Andrew Davis.

The pole-winning No. 46 BMW M3 of Fall-Line Motorsports teammates Trent Hindman and John Edwards dominated the opening stages of the race, leading all but four of the opening 42 laps. The first caution waved with 31 minutes remaining, with Edwards leading the top nine Grand Sport (GS) cars into the pits while allowing Shane Lewis to take the lead in the No. 12 Porsche 911 of Bodymotion Racing.

On the restart, Liddell went to the outside in his third-place Camaro, boxing in Edwards’ BMW while avoiding an incident that involved three of the top five cars in the GS class.

“To be honest, I thought John (Edwards) would drive away from us after the restart,” said Liddell, who won for the first time in his seventh race in the series. “I had the bit between my teeth to see what I could make of the first lap. I had a really good run and managed to get alongside John, keeping him boxed in behind Shane (Lewis). When we got to the brake zone for Turn 1 (a left-hander), I just broke completely right and went to the outside of them going into the turn. I saw there was some carnage behind me, but I had a pretty massive lead at that point. I don’t know if John would have passed us, but I thought he was going to chase us down.”

Edwards never got the opportunity. Only nine minutes later, the second caution waved for an incident involving Marc Miller, who made heavy impact with a tire barrier that destroyed the front end of the No. 3 Mazda MX-5 of CJ Wilson Racing. Miller was treated and released from an area hospital on Friday evening.

The debris strewn across Turn 6 forced the race to end under caution.

“I didn’t have a great run on the restart,” Edwards said. “I had to lift to avoid passing the safety car before he got to pit road. That gave Robin a great run, and then the No. 12 hit the brakes earlier than I expected for Turn 1 and I had nowhere to go with Robin on my right. Luckily we came away with second and got the points lead. I hate to be upset about second, but it’s still hugely disappointing not to win on such a strong day.”

Brad Jaeger and BJ Zacharias finished third in the No. 14 Nissan 370Z of Doran Racing, followed by the TRG-AMR No. 07 Aston Martin Vantage of TRG-AMR and drivers Max Riddle and Kris Wilson. The No. 78 Ford Mustang Boss 302R of David Levine and Lucas Bize for Racers Edge Motorsports finished fifth.

The No. 26 Mazda MX-5 of Randy Pobst passed the No. 93 Honda Civic Si of pole-winner Chad Gilsinger on the ninth lap and joined Freedom Autosport co-driver Andrew Carbonell in dominating the remainder of the race, taking the Street Tuner (ST) victory. 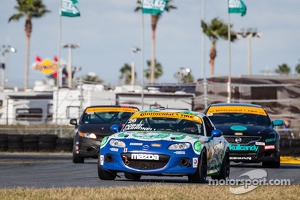 It was the fourth career victory for Carbonell and seventh for his new teammate, with Pobst last winning at New Jersey Motorsports Park in 2009.

“The Freedom Autosport team had our car so well balanced that it was really working in the hot Florida sun,” Pobst said. “We really had the Continental Tires working, and it was amazing that they help up so well on this hot racetrack.”

Chad McCumbee and Stevan McAleer finished second in the No. 5 Mazda MX-5 for CJ Wilson Racing, followed by Daytona winners Jeff Mosing and Eric Foss in the No. 56 BMW 328i for Murillo Racing.

CJ Wilson Racing originally qualified first and third, but both McAleer’s pole-winning No. 5 and Tyler McQuarrie’s No. 3 Mazda’s were sent to the rear of the grid after failing post-qualifying inspection and putting the No. 93 Honda Civic Si of HART with Gilsinger and Michael Valiante on the pole.