STOUFFVILLE, Ontario -James Vance will join forces with Compass360 Racing to continue his rookie season in the IMSA Continental Tire SportsCar Challenge in 2014.

Vance, 21, joins the team immediately, with their first race together May 2-3 at Mazda Raceway Laguna Seca in Monterey, Calif. Vance and teammate Jon Miller will share the No. 74 Honda Civic Si fielded by C360R in the Sport Tuner (ST) class. 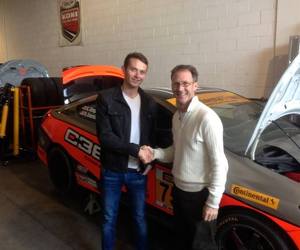 James Vance
Vance C360Toronto-based C360R offered Vance the dual advantages of a championship-winning team located near his Ontario home. C360R has won series championships in the Continental Tire SportsCar Challenge in 2006, 2007, 2009 and 2010, the World Challenge Touring Car series in 2011, 2012 and 2013, and the Canadian Touring Car Championship in 2010.

"I am extremely excited to get to work at Laguna Seca," Vance said. "Especially as I have been quick each time I have been there in the past. Signing with C360R and being able to work with such an experienced team with a winning pedigree is definitely an honor.

"With my hometown being Toronto, it comes hand in hand as C360R is also based out of Toronto. I am looking forward to getting to work with my teammate Jon Miller, and I am anticipating a successful season with this amazing team!"

Vance competed in the ST class in the first two races of the season, in January at Daytona International Speedway and in March at Sebring International Raceway.

"After the first two rounds being a bit of a roller coaster for me, as well as Jon, I think it is going to be imperative for us to just finish races and consistently score points for this long championship road," Vance said.

C360R Team Principal Karl Thomson is thrilled to welcome the talented Vance to his team and is confident the tandem of Vance and Miller will be successful.

"James impressed us with his performances in the first two races of this Continental Tire season," Thomson said. "We feel he'll make an excellent partner to Jon Miller in our No. 74 Honda Civic Si. As an added bonus, he's based in Toronto, not far from our shop, so I expect he'll be able to work very closely with our crew over the coming season."

Vance also will bring his sponsors, Bionic Environments Inc. of North America and ExpoSystems USA, to C360R and its No. 74 Honda Civic Si. The continued support of those sponsors has enabled Vance to make a seamless transition to the new team.