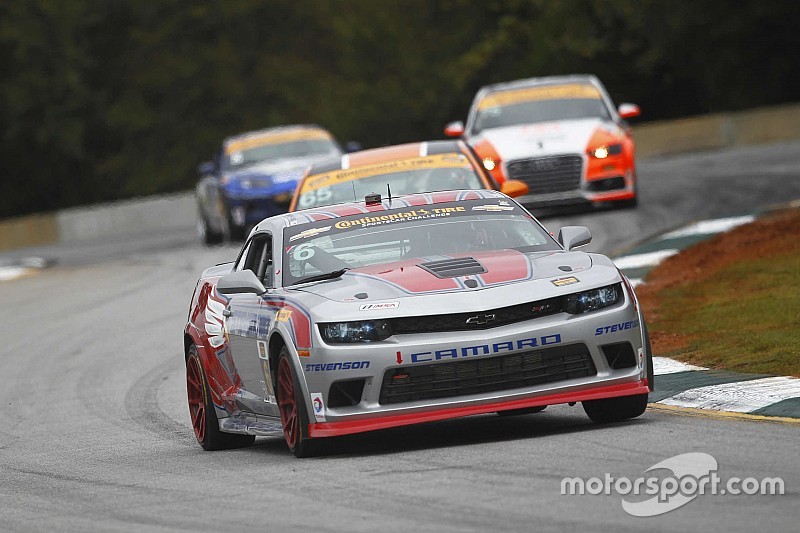 Camaro Z/28.R with four victories in second season of competition

BRASELTON, Ga. – Chevrolet earned its first Manufacturer Championship in the Grand Sport (GS) class of the Continental Tire SportsCar Challenge on Friday at Road Atlanta with its Chevrolet Camaro Z/28.R race car. It is Chevrolet’s second Manufacturer title in the series, the first coming in 2008 as part of the Street Tuner class.

The Chevrolet Camaro Z/28.R won four races this season – the most of any manufacturer in the series.

“Chevrolet is proud to have won the 2015 Grand Sport Manufacturer Championship in the Continental Tire SportsCar Challenge,” said Jim Campbell, Chevrolet U.S. Vice President, Performance Vehicles and Motorsports. “This is the result of tireless efforts, cooperation and teamwork between our race engineers, Camaro Z/28.R drivers and partner teams at Stevenson Motorsports and Mantella Autosport. Each strategic call, exceptional pit stop and skill of our drivers made the difference in an extremely close season of competition.

I’ve seen a lot of championships won here, and now I’ve done it myself. This is just unbelievable.

“The Camaro Z/28 production car set a new standard for technology transfer of the Camaro platform between the showroom and racetrack,” Campbell added. “Winning in the showroom and on the racetrack has been important to Chevrolet for more than a century, and today’s achievement helps us continue that tradition.”

Mantella Autosport put a second Camaro Z/28.R on the GS podium with a third-place finish for Kyle Marcelli and Martin Barkey in the No. 80 MBRP/Praxair/The Sport Lab Chevrolet Camaro Z/8.R – their best result of the season.

A persistent rain provided an extra challenge for the competitors Friday. Davis started from pole position and never dropped below second during his opening stint. Liddell and Marcelli battled late in the race for the second spot with Liddell taking the position for good on a restart with 20 minutes left.

Mantella Autosport’s No. 8 Gulf/Spyder Camaro Z/28.R of Anthony Mantella and Mark Wilkins placed fifth for their best finish of the season. Lawson Aschenbach and Matt Bell in the Stevenson Motorsports No. 9 Chevrolet Camaro Z/28.R finished eighth.

The Camaro Z/28.R is based on the road-going Chevrolet Camaro Z/28, and the two share considerable traits:

Andrew Davis, Stevenson Motorsports No. 6 Chevrolet Camaro Z/28.R – 2015 GS Champion and race runner-up: “It’s almost indescribable. Even though we came into this race knowing we only had to do the minimum drivetime… I had all the faith in the world in my Stevenson Motorsports crew, my Chevy Camaro Z/28.R, Pratt & Miller Engineering, Team Chevy and everyone. Knowing Lady Luck, she can be really fickle. It’s a tremendous amount of relief that I’m feeling right now. I’m so proud of the effort all year long. To do this at my home track is very special and very emotional. The little kid who was watching racing here 30 years ago wouldn’t believe this. I’ve seen a lot of championships won here, and now I’ve done it myself. This is just unbelievable.”

Robin Liddell, Stevenson Motorsports No. 6 Chevrolet Camaro Z/28.R – 2015 GS Champion and race runner-up: "I was cautious when I got in the car because the conditions were treacherous. To be honest, the conditions before the last stop got worse, and then after the last stop, it got worse again. Then after this last restart, it was really bad. I'm pleased that they ran; I think they made the right decision, but it was very marginal. The track was really really tricky. I saw a lot of good guys at the front making mistakes. We couldn't have at it as such. We were pushing as hard as we could but trying not to make mistakes because it was so easy to make a mistake and get really out of shape and lose the run. Just trying to drive the car consistently fast in those conditions was really tricky.

"Right now I just feel relieved. I don't really feel emotional one way or the other right now. I just feel relieved that we've got it done. I'm disappointed that I couldn't win the race. With 20 minutes to go, that was what was in my mind. But we just didn't have that today.

“I’m really happy with the team… a great job. What can we say, we've had a pretty flawless season and that is why we've ended up where we are! I wish we could have more like this!"

Kyle Marcelli, Mantella Autosport No. 80 MBRP PRAXAIR/The Sport Lab – finishd third: "What a great race, and a great way to end the season. Mantella Autosport has worked hard all season, and this was the first year of running the Camaro Z/28.R. We had a lot of fun all year. We had some highs and some lows. We've been close to the podium on numerous occasions, but today's third place feels a bit like a win for us. So we'll take today's third place and work our way forward. We had a few chances. We were running second competitively. Robin (Liddell) and I had a good battle. He felt a little bit stronger than me in the brake zones, and I felt a little bit stronger in the quick stuff. But it was a very good day for Chevy."

Lawson Aschenbach, Stevenson Motorsports, No. 9 Chevrolet Camaro Z/28.R – finished eighth: "It was tough out there. First off, hats off to Robin (Liddell) and Andrew (Davis) and everyone on the No. 6 Camaro Z/28.R. They did such a good job this year. The whole program was just flawless. To see them get a championship, and more importantly to get a championship for Stevenson Motorsports - Johnny Stevenson and Susan Stevenson - it was really the plan from the beginning of the year. It didn't really matter if it was the No. 6 or the No. 9, it was just a matter of let's get them a championship. I'm very happy for the team. Unfortunately, it wasn't our No. 9 car's day. I was really struggling out there. The car felt good initially, but I'm not sure... we made some changes during the race, and maybe we went the wrong way and really paid the price for it. I just couldn't keep up. Regardless, still a good year - fourth in points. We've had a tough go at it on certain tracks, in certain races, but I'm happy with my first season at Stevenson Motorsports and I hope to be doing the same thing next year."

Matt Bell, Stevenson Motorsports, No. 9 Chevrolet Camaro Z/28.R – finished eighth: "First of all huge congratulations to Chevrolet for getting the manufacturer title; to Stevenson Motorsports for getting the team title and of course the No. 6 Camaro Z/28.R guys (Robin Liddell and Andrew Davis) for getting the driver title. That is a trifecta right there and it is awesome that they finally did it. The No. 6 car guys have been at this a long time and they have been looking for a championship, and they finally made that happen so that is really cool. I'm proud of them. It is always a team effort. Modestly we are all doing the same amount of work on this team. We had quite a bit of bad luck, but it worked out.

"As far as this race goes, the car wasn't the best car we've had in the rain. I love driving in the rain, but I need it to free-up at the right time in the corners. If it is fighting me on that, then I have to slow way down. We were basically loose in (the corner); had a bunch of understeer in the apex and then loose off. That is the exact opposite of what I want. I want it to be a little bit stable coming in. I want to be able to free it up right out of the apex, and then find some stability for power down. I just didn't have that today. It is hard to tell what the car is doing.

I made a bad call I think telling the engineers what they should be doing. They reacted to that. It was a 50/50 chance on it, and I think they went the wrong way. So I think Lawson (Aschenbach) had an even harder time that I did. He went out when it was raining a little bit harder. He gave it all he could. In perfect circumstances, I think he was running the same times as everyone else, but it took just a little thing... a little bit of traffic or a little bit of standing water in the corners to completely throw him off. I feel bad for him. We gave it everything we had, gave it our best shot and I am happy where we ended up."

Jim Lutz, Chevrolet Camaro Z/28.R program manager: “It has been a great year for the Camaro Z/28.R program. A big thanks and congratulations go to John Stevenson, Robin, Andrew and everyone at Stevenson Motorsports for this GS title. A runner-up finish at Road Atlanta is a great way to end a championship year. We’re also proud to see Mantella Autosport on the third-place podium finish for Kyle Marcelli and Martin Barkey. You couldn’t ask for a much better end of the GS season for Chevrolet and the Camaro Z/28.R.”