With the demands of his baseball schedule, Wilson doesn’t see his team race often, but he did get the opportunity at Daytona during the season opener of the CTSCC Series.

As a youngster, C. J. Wilson dreamed of becoming a major league baseball player and of driving fast cars. So far in life, he’s accomplished one of his dreams in epic proportion and is on his way with part two. Wilson is in his eighth season of Major League Baseball and is known as one of the best left-handed pitchers in the big leagues, compiling 17 wins for the Los Angeles Angels in 2013 after six successful seasons with the Texas Rangers. Reportedly, he signed a $70 million, multi-year contract with the Angels.

Knowing where his bread is buttered, Wilson hasn’t spent as much time with racing as he would like, but he realizes he’ll have plenty of opportunity once his playing days are over with. Wilson’s contract, like that of other high-paid stars, has clauses that preclude participation in so-called dangerous endeavors, such as racing, ice hockey and other contact sports. “I am not going to drive something that is not safe,” Wilson said while at the Rolex24. “I have a lot to lose by taking risks that I don’t need to. I believe in the sanctity of my contract, and I want to be able to throw 200 innings a year until I am done with baseball, then I can go race all I want.”

Wilson did race recently in a 25-hour endurance event at California’s Thunderhill Raceway Park. “I was in a front-wheel drive (Mazda 6) diesel, and I did a couple of stints in the car with one being about four hours. Even though I hadn’t been on track for a long time, I didn’t have any incidents, although I felt a little bit rusty. I am really bummed that I don’t get to race more. The more I am around racing the harder it is to walk away.”

In preparing for the future, Wilson started a team in 2010, fielding Mazda’s in the highly competitive Street Tuner division of Continental Tire Sports-Car Challenge Series. The team has progressed well since its inception, winning twice and taking three pole positions in 2013. The driver line-up for the Mazda MX-5s includes Marc Miller, Tyler McQuarrie, Stevan McAleer and Chad McCumbee.

With the demands of his baseball schedule, Wilson doesn’t see his team race often, but he did get the opportunity at Daytona during the season opener of the CTSCC Series. 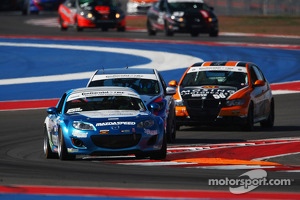 Wilson’s long-term desire is to move up the ladder, possibly advancing to the newly constituted TUDOR United SportsCar Series and one day to race at the 24 Hours of LeMans. But that’s in the distant future and for now, he must concentrate on baseball, as that sport pays the bills. “I have a great job that keeps me busy, and it’s not like I am in Siberia drilling for ice. I am playing baseball, which is pretty cool,” he noted.

He keeps up with his team through various means of technology, such as having live timing and scoring on his phone. “Last year when we won our first race at COTA, I was in my car going to a Spring Training game, and I got a text saying, ‘We won,’ so I called right away to get the particulars,” he commented. “I told my guys to send me the video, but I couldn’t watch it until after I pitched that day.”

Walking around the TUDOR paddock, Wilson couldn’t help but eye the sleek prototypes on hand. “It is nice to come to Daytona and see all the cool Prototypes and GT cars that I haven’t seen since Petit LeMans last season,” he noted after meeting with the media to put the spotlight on his charitable foundation.

He’s also fortunate that his wife, Lisalla, enjoys racing and she has just completed a Skip Barber School at Mazda Raceway. She also won a simulator activity, and plans to sing up for a more advanced school. Asked whether the two might race together, Wilson said, “That would be hilarious. We’re both avid motorcyclists, too. I lucked out as a lot of baseball wives wouldn’t go for racing.”

Wilson brings a fresh perspective to racing, plus he gives others a boost through his C. J. Wilsons Children’s Charities, which raises funds, awareness and youth participation in community service and charitable giving to benefit children and their families affected by chronic, life-threatening illnesses or dealing with social or financial challenges.

Pitcher Wilson is a proven force when on the mound and racer Wilson intends to transfer that intensity to his motor-racing activities, taking advantage of every opportunity presented.

A runaway and a steal in Toyota Pro/Celebrity race