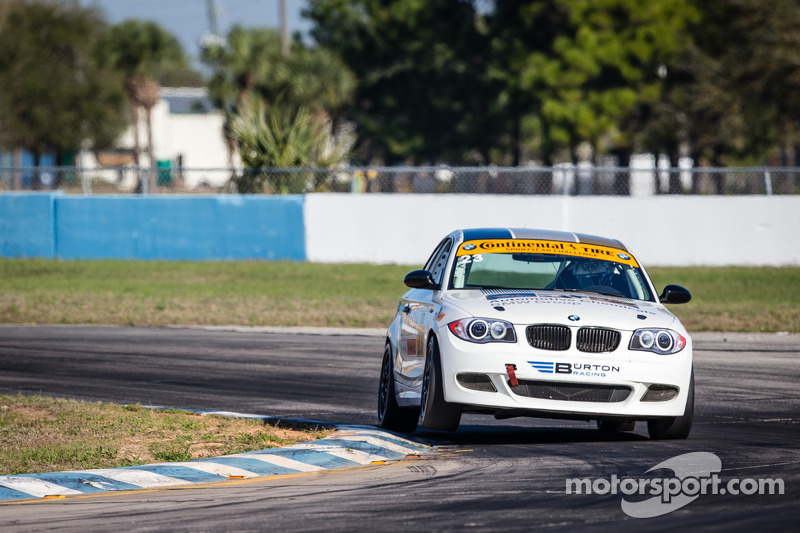 Burton Racing had a strong showing in the CTSCC race at Mazda Raceway Laguna Seca.

Monterey, Calif. (3 May 2014) – The defending IMSA Continental Tire Sports Car champion Burton Racing squad headed west for Round 4 of the 2014 championship with the Continental Tire Grand Prix of Monterey Powered by Mazda staged at Mazda Raceway Laguna Seca this weekend.

The long trip out to California yielded some tangible results as the team made a lot of forward progress in the race on the way to scoring its first top-five finish of the year, building on a positive start to the 2014 campaign, which saw the team opening the season with two double top-10 finishes in the first two rounds of competition.

After a challenging 2.5-hours of navigating the 11 tricky turns of Laguna Seca, Terry Borcheller made a calculated last-lap move to finish the race in fourth, marking the team’s first top-five finish of the season as the No. 23 BMW Automotive Chemicals/Excelda BMW 128i was able to move up 11 spots from the start of the race with Borcheller and fellow champion Mike LaMarra once again making a strong pair.

The sister Burton Racing BMW 128i piloted to the checkers by Connor Bloum finished 14th with the result marking a remarkable 10-position gain from where they started the race.

Bloum was able to race to the finish as he worked to make the most out of the car as the tires lost grip late in the day.

Mike LaMarra started the race behind the wheel of the No. 23 BMW Automotive Chemicals/Excelda BMW 128i while Greg Strelzoff took the green flag in the sister No. 22 Gold Eagle BMW 128i. As if predicting the many yellows to come, the first full-course caution flew on the very first lap.

In spite of the many incidents, both drivers gave solid performances, steering clear of trouble and handing the controls over to Borcheller and Bloum, respectively, in good position. In fact, Strelzoff’s stint included some smart driving when he opted to back off from increasing pressure from behind and in doing so narrowly avoided the cause of one the seven full-course cautions.

Despite quickly wearing tires in the final stages of the race, Bloum put down consistently strong lap times, many faster than the cars at the front of the pack, and managed to make up an astounding 14 positions.

Similarly, Borcheller delivered another strong performance in the No. 23, patiently making his way up the pack and ending the race fighting for position among the top-five fastest cars in the ST class. With an incredible move on the very last lap of the race, Borcheller passed the only remaining BMW ahead of him to score a fourth place result and the top BMW finish.

“It was a challenging day and I would be lying if I said I wasn’t disappointed for the No. 22 car as we didn’t extract all of the potential there today,” said Team Manager Keith Burton after the race. “But ultimately it is a long season and this is just the third race. We scored some solid points with the No. 23 car today, and now we are just looking forward to getting a positive result at Lime Rock and the rest of the season.”

The Burton Racing Crew will be back in action later this month at Lime Rock Park on the 23-24 of May.

Mike LaMarra, No. 23 BMW Automotive Chemicals/Excelda BMW 128i – “It was a long, hard race with not such a great start. But this finish has really picked me up for sure and we had a great strategy and Terry did some amazing driving. Especially there at the end with the pass with the Dinan Power drag race with the BimmerWorld guys, that was really terrific. I’m really proud of him and all of the guys. My stint was a little challenging because I got off a bit in Turn 4 and then got railroaded, and then as I was gaining positions back had someone get into me from behind in Turn 9 so that was difficult. But what a great result!”

Terry Borcheller, No. 23 BMW Automotive Chemicals/Excelda BMW 128i – “We had a lot of green running, which was really good for us because our strategy proved to be a bit off. But the green stints ended up actually helping us because we performed our strategy best. But it was a really fun race. I wish we hadn’t had quite so many yellows but the green that we did have was a lot of fun. Peter (Hansel, Engineer) did an incredible job with the car from what it was in practice. Mike (LaMarra) brought the car in clean, like he always does, and it was a really fun race at the end. Being in the back of that line, especially at Laguna, I didn’t think I was going to have enough car to get to the position that we were able to get to, but it worked out in the end. I was racing around some really good friends at the end with Greg (Liefhooghe) and Seth (Thomas), which was fun. It was a fun race and I think it was good for our team. We definitely needed these points. As the highest finishing BMW, we definitely needed that for the championship. We didn’t want to slip too far behind. So this was a great finish for us.”

Greg Strelzoff, No. 22 Gold Eagle BMW 128i – “It was an outstanding drive today by my teammate, Connor Bloum. For him to drive as he did was extremely impressive. There was a miscommunication in the pits and he only took two tires during that pit stop,so he drove with two tires the entire race and showcased some absolutely amazing skill to be able to move forward with a car that was certainly lacking grip. It definitely shows his tremendous ability and I’m really proud of him. As for my stint, I was just playing a conservation game, trying to stay clean and I held my own against the Mazda’s that were definitely faster today.”

Connor Bloum, No. 22 Gold Eagle BMW 128i – “It was a tough drive today, especially with not getting the right side tires on the car. But I made it work. On the positive side, the car definitely felt the best it had felt all weekend. Peter (Hansel, Engineer) and the rest of the guys made huge improvements on the car throughout the weekend. Now I’m just ready for Lime Rock, I know we can be strong there so it should be a good race.”