A late caution period would lock the No. 81 BimmerWorld BMW 328i of Greg Liefooghe and Tyler Cooke into a second-place finish after Liefooghe led in the final stages and was working on moving back into the lead.

A late caution period would lock the No. 81 BimmerWorld BMW 328i of Greg Liefooghe and Tyler Cooke into a second-place finish after Liefooghe led in the final stages and was working on moving back into the lead. With the field crossing the finish line behind the pace car, the No. 81 duo settled for their second consecutive runner-up result at Daytona, and with BimmerWorld's tandem of Kevin Gleason and Corey Fergus holding the No. 80 BMW 328i in eighth at the checkered flag, the team left Florida with a pair of top-10s.

"Even though second place is a great result that sets us up with some solid points for the rest of the season, it is a little frustrating to get so close to winning every year without actually being able to get on the top step," admitted Liefooghe, who ranks as one of the best pro drivers in the series.

"The second part of the race saw many yellows; I probably only drove around 10 green laps. With the draft, it was a gamble on what position you would be in when the yellows would come out, and we didn't get a chance to race to the finish. The BimmerWorld team did an impeccable job and we'll be ready to get the win next time." 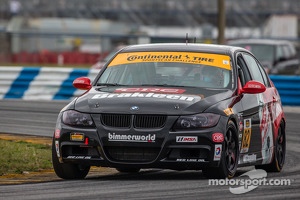 The other half of BimmerWorld's entries had a tougher time at Daytona. The No. 82 CRC BRAKLEEN® BMW 328i driven by Seth Thomas and Dan Rogers was drilled out of the race by contact, and the brand-new turbocharged No. 84 BimmerWorld BMW 328i, built on the F30 platform, continued its development program in the heat of competition, which can offer valuable lessons that aren't necessarily tied to high value finishing positions.

As a whole, and with three new drivers comprising the team of eight pilots, team owner/driver James Clay says he's pleased with Round 1.

"I was certainly happy with some of the results for the first event, and more importantly I think we were all very happy with the operation of the expanded team and effectiveness of our new teammates," he said. "Greg and Tyler drove another solid race and we all wanted the win, and Kevin and Corey came out of the gates strong in their first race with the team. The 82 ran into misfortune with traffic, which always affects a percentage of the field, and the more cars we have, the more likely we are to be involved on a given weekend.

"The new F30 was running strong and we expected a top-10 result, but we were reminded this weekend that we still don't know this platform as well as our E90 cars and it still has some surprises in store."

With three proven E90-based 328i BMWs and the lone F30 chassis program BimmerWorld is spearheading, Clay sees big growth ahead for the No. 84 car this season.

"The BimmerWorld E90 cars are well-developed, but the addition of MCS as our damper technical partner has opened the door to big handling improvements, and we are making good gains there, and there's more to come," he added.

"The F30, on the other hand, follows a similar development path on the chassis due to its similarities with the E90, but the driveline is a completely different animal. We are learning constantly, just as we are with the E90 platform in our ninth year with that engine, but certainly the curve is steeper on the F30 currently."

Corey Fergus: "We had a pretty strong finish at Daytona and walked away with some good points towards the championship. I just wish it would have stayed green longer! But we're already pumped for our next race at Sebring in March. Unfortunately, Sebring is an outlier in terms of car setup so we'll have to start from scratch. However, after racing a car from a different manufacturer last year, I learned that the BMWs are great race cars and with their reliability and little fall-off during a stint, I'm sure they'll be a good car to have there. I think Kevin and I have a shot this season for some great finishes so I'm excited for what's to come."

Kevin Gleason: "My first race with BimmerWorld was really encouraging. We accomplished most of our goals and came out of the weekend with solid points and a clean car. Corey and I are working well together and the team has treated us like we have been around for years. I can't thank the entire team enough for all of their hard work. They make running four cars look easy!"

Tyler Cooke: "After a strong race like we had at Daytona, I feel like Greg and I could earn the ST title. If you do well in the first race of the year, it boosts everyone's confidence for the year ahead. Greg and I came very close to getting the ST title last year, and I can see being in the same spot or better this year."

Greg Liefooghe: "One of the main positives of the weekend was that we never ran below third place, thanks to Tyler's efforts and the team strategy. It is very encouraging for the rest of the season."

Dan Rogers: "The lead up to the race was actually looking really positive. Seth and I both ran in the 2:06s, mostly without a great draft, so we had the pace to keep up with the field, and to be a competitor at the end. Unfortunately, I got a fairly nasty hit in Turn 3, while the car was loaded up, got turned around and couldn't save it. Sitting at the exit of Turn 3, with half of the ST field still coming through, I got collected by the No. 34 Nissan, ending our race. Tough day for us and we've got some repairs to make before Sebring."

Seth Thomas: "We're definitely moving forward from here and not dwelling on things. Any time you are the first car out of the race like we were, it is time to start looking to the next round of the championship. My eyes are focused on Sebring which is a track where I got my first win with BimmerWorld. I am looking forward to going back there for the first time since that win and improving our place in the standings. We've got a lot of work ahead to improve from being at the bottom of the list."

Jason Briedis: "It was a difficult first weekend with some new car teething issues, but I am confident the team will have it sorted out before we head to Sebring. For me, it was nice to get one race in the books. I left Daytona very optimistic for the upcoming season."

James Clay: "I'm very happy with the F30 car at this point and some cooling system parts from C&R developed over the winter are allowing us to lean on it 100 percent. There are still some oddities and I was able to turn some decent laps in the race working around them, but they should be resolvable in the short-term and Jason and I will be producing results immediately this year."