Alta Velocita Racing (AVR) driver and team owner Jerome Mee will get behind the wheel at Sebring International Raceway for the first time this week. Though a rookie to the 3.74-mile, 17-turn track after racing a part-time Cooper Tires Prototype Lites Powered by Mazda season in 2013, Mee brings more experience than most for his first time competing in the Mobil 1 Twelve Hours of Sebring Fueled by Fresh From Florida weekend.

With eight offseason test sessions under his belt at his home track MSR Houston, Mee is more than ready to jump in a Prototype Lites car at a new venue and race in the thrilling International Motor Sports Association (IMSA) Development Series. 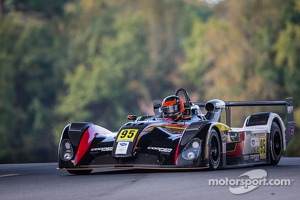 "Sebring is a very bumpy track and my home track is very bumpy at MSR Houston, so most of my settings and setup will pretty much be the same," Mee said. "One thing I noticed last year was when I went from my home track to Circuit of the Americas (COTA) or Road Atlanta, it was significantly physically less demanding. Sebring is physically demanding, and I think I'm in better condition and ready to deal with a track like that.

"Setup on the car and my ability to just drive my car in a better position than last year has improved. Considering the headaches that we've dealt with in rebuilding the engine in the offseason and getting adequate track time after the car was dialed in, I think we did as best as we could to be prepared for 2014."

After competing for a partial season in the L2 category, Mee's approach to a fresh start in IMSA competition holds less nerves and more excitement.

Mee's ambitions for Sebring and the entire 2014 Cooper Tires Prototype Lites Powered by Mazda season are simple and straightforward.

"I don't go out there to come in second," he said. "I go out there to win in my class and finish as high as I can in the race. A perfect season for me would be to have a good field of L2 competitors where at the end of the season it's down to me and maybe two or three others to duke it out for the championship at Road Atlanta. It's no fun to not have a decent field or to race by yourself. It's good as a racer to be pushed, have a goal and chase somebody to mix it up."

Alta Velocita Racing and the Cooper Tires Prototype Lites Powered by Mazda field will practice for the first time at Sebring International Raceway on Wednesday, March 12 at 10:35 a.m. (ET). Mee will qualify at 9:20 a.m. Thursday, March 13, and the green flag will drop for Race One at 5:30 p.m. ET. Race Two's 45-minute sprint begins at 11:15 a.m. Friday, March 14.