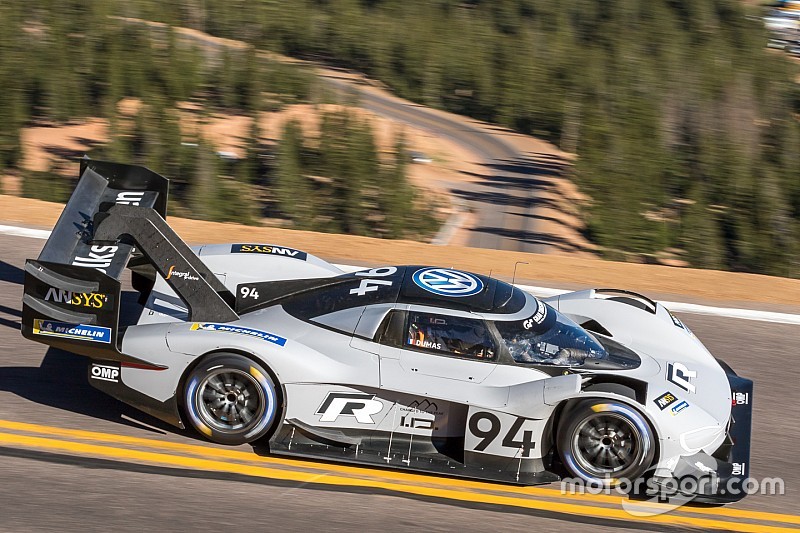 It will again install World Endurance Championship star Romain Dumas in the 500kW, 680bhp four-wheel-drive sports prototype, and has repeated its message from Pikes Peak that the electric vehicle record at Goodwood is its target – rather than the outright fastest time.

Dumas stunned the motorsport world to deliver a maiden high-profile victory for an electric car in open-class competition, a car that technical chief Willy Rampf says "has the most downforce of any car I've worked on".

Goodwood's EV record stands at 47.34 seconds, recorded by Jonny Cocker in a Lola-Drayson B12 69/EV. The outright record is held by Nick Heidfeld who completed the 1.86-kilometre route in 41.6 seconds at the wheel of a McLaren-Mercedes MP4/13 Formula 1 car in 1999.

"I am really looking forward to getting back behind the wheel of the I.D. R Pikes Peak at the Goodwood Festival of Speed," said Dumas. "The race in Duke of Richmond's estate is a very special event that is steeped in tradition.

"The I.D. R Pikes Peak may still be very young, but the record-breaking run on Pikes Peak has already made it a living legend."

When asked about an attack on Goodwood's records after his Pikes Peak triumph, he told Motorsport.com: "I think the electric vehicle record, we can go for this. But what is the [outright] record? It's Nick Heidfeld in McLaren, so he had 800bhp and half of our weight. It could be difficult, but let's see.

"This car in the corners, with the downforce we have, it's the best you can have apart from a Formula 1 car."

The West Sussex event will form part of the car and driver's celebratory tour, and Volkswagen Motorsport director Sven Smeets said his team would target a second record in Britain.

"I still get goosebumps when I think about the magnificent success on Pikes Peak," he said. "However, that race is history now. We are looking ahead, and looking forward to showing European fans the I.D. R Pikes Peak."

By Lewis Duncan
Road racing
Subscribe to our newsletter