Averaging 87 mph up a small mountain road over 12 miles long at 14,000 feet in altitude, Sébastien Loeb made history. 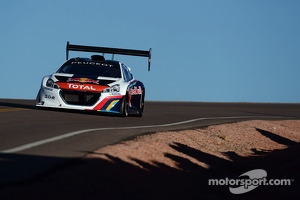 To really put things into perspective, Rhys Millen’s record time from his win in 2012 was a 9 minutes 46.146 second sprint. Millen beat his own record by 44 seconds, running a time of 9 minutes 2.192 seconds.

This means that not only did Loeb take the record by 1 minute 33 seconds, but he beat the second place finisher (Millen) by a whopping 50 seconds. That’s crazy.

Records are meant to be broken, as they say, but to see a record like this one which slowly gets faster and faster each year be shattered by such a large margin is simply incredible.

“At the beginning of my run there was a bit of pressure for sure. With steep drops either side, and so much work and investment going into this programme, you obviously can’t make any mistakes… It’s 20 kilometres of taking risks,” the Frenchman said.

“I really didn’t expect anything better than 8m15s, so to do 8m13s was fantastic. Before the start I didn’t really know if I should push absolutely to the maximum or if I should just push to a comfortable pace, in order to make sure of the victory. In the end, I decided to push to the limit.”