Official practice for the 90th Pikes Peak International Hill Climb began in earnest on Wednesday with Romain Dumas making his first runs on the famed mountain course. The Frenchman quickly came to grips with the road with the quickest time in the Pikes Peak Open class. At the wheel of his Porsche 911 GT3 R, Romain was able to outpace "Monster" Tajima. He continues his discovery of Pikes Peak on Thursday and Friday, with the race running on August 12. 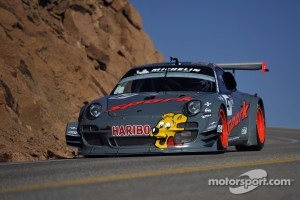 Each day, the competitors in the Pikes Peak International Hill Climb uncover one of three portions of the course that make up the famed "race to the clouds". Romain Dumas and the other competitors in the Pikes Peak Open class, as well as the Electric category, were running on the first part of the course, which is also used for setting a qualifying time. "I was looking forward to driving on Pikes Peak and I’m happy to finally see the legendary place for real" he admitted. "I was expecting a challenge, and I got one. Learning the course through videos or on foot is one thing, but at full speed it’s another. The environment is magnificent and driving here is a real pleasure. I can’t wait for the rest ! I’m already enjoying myself but I also began competition as this was also qualifying for us."

After technical inspection the day before, the official Porsche driver made a mark on his first experience in Colorado : fastest times in both scheduled runs of the day. In consequence, Romain was satisfied with the day. "The car immediately ran well on the lower section : our preparations at Pole Mécanique d’Alès and the evolutions we brought to the car have proven effective. Once again, the Porsche 911 GT3 R showed its qualities, even if the environment this time is very different from race tracks ! We still have a few refinements to make of course, but for what I considered a reconnaissance run, it’s quite encouraging."

While the favorites of the race, primarily entered in the Unlimited class, will be making their qualifying runs on the lower section tomorrow, Romain Dumas will be on the middle portion. "It’s a section composed of several hairpins and therefore a lot of acceleration points. The profile is different so by consequence the notes will be different. You have to put into perspective the times from the first day : it’s only the first practice and the main protagonists for the overall win have not all run on the lower section, but it’s clearly a boost for the entire team who have done a good job. I’d also like to thank Fred Veitch (driver of a Porsche 996 Turbo) and the Porsche of Colorado Springs dealership for all of their help." Practice continues for the 90th Pikes Peak International Hill Climb at 5 :30 am (local time). Results are available at

The return of Monster Tajima with an electrifying new challenge