After signing the quickest time of the first practice session, Romain Dumas participated in the second official practice day for the Pikes Peak International Hill Climb on Thursday. The Frenchman once again had a good showing with the No. 47 Porsche 911 GT3 R. While still discovering the famous American hill climb course, he had the fastest time in class. 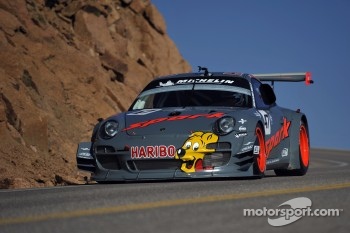 On Tuesday, Romain Dumas made his debut at Pikes Peak with two runs on the first portion of the mountain road comprised of about 156 corners and over nearly 20km long. He continued to learn the ins and outs of the "Race to the Clouds" today with three runs on the middle sector, which contains numerous hairpin turns. A very different portion of road from the first day’s section, which was faster. "Today was again positive and rich in learning" explains the official Porsche driver. "The car is still in the hunt : we are ahead of our direct competitors in the Pikes Peak Open class and we are slightly faster than the electric prototype driven by Monster Tajima, who knows his way around here of course. The car isn’t used to this type of hairpin, but it’s proving that it’s adaptable and the chassis is really doing well in the quicker corners. With the altitude, we’re just missing a bit of air. As for me, I continue to learn the course and its unique characteristics. I’m quite curious to know what it will be like to run on the top section for the first time, which looks quicker. I’ll be discovering those famous blind corners !"

Now, the team will debrief and refine the settings to the Porsche 911 GT3 R, with one of Romain Dumas’ objectives being to gather as much information as possible. "I’m still enjoying myself immensely" he admitted. "That was one of the hopes here, but no the only one. Of course, one of our goals is to win the Pikes Peak Open class. For the rest, I’m keeping an eye on the top competitors’ times but the priority is to learn as much as possible. We must not forget that for both me and the team, it’s our first time here. If I want to be in the hunt for the overall victory in the futur, it starts with what we learn today."

The final day of practice for the 90th Pikes Peak International Hill Climb will be held on Friday from 5 :30 am to 9 :30 a.m. (local time). This time, Romain Dumas will conduct several runs on the third and highest portion of the mountain, which tops out at 14,110 feet. Afterward, he will participate in the Fan Fest in downtown Colorado Springs