Motorsport’s governing body, the FIA, has requested an explanation from the Swiss federation over the circumstances of TV star Richard Hammond’s high-profile crash during the Hemberg Bergrennen event on Saturday.

While filming for Amazon’s The Grand Tour TV show, Hammond escaped from his inverted Rimac Concept One electric supercar after somersaulting the car down a hillside after the finish line of the Swiss hillclimb course.

The $1million car, which boasts over 1,000bhp, then burst into flames, sustaining massive damage. The former Top Gear presenter was airlifted to hospital, and required surgery to a fractured knee.

Auto Sport Schweiz confirmed today that the FIA has been in contact to ask for findings of the investigation that is currently being carried out.

Its statement read: “As the international press reported, a serious accident occurred on Saturday, June 10 2017, during ‘show runs’ during the Hemberg Bergrennen.

“This accident tainted the reputation of motorsports in general and mountain races in particular, and the FIA has been forced to demand an opinion from Auto Sport Schweiz.

“Our association is obliged to examine the events in detail, and to initiate disciplinary proceedings. As this is an ongoing process, we cannot provide any further information to third parties at this time.”

Key to the investigation will be why Hammond’s car was travelling too quickly to make the left-hand bend after the finish line.

When asked by Motorsport.com why it had requested the data, an FIA spokesman replied: “As part of the operating procedure for the recently established World Accident Database, the FIA asks ASNs to provide information regarding incidents of a serious nature around motor sport events anywhere in the world.

“This is for the purpose of populating the database with real facts and data, and accurately informing the development and advancement of motor sport safety technology and procedures.”

Hammond was not a participant in the event, which was the opening round of the Swiss Hillclimb Championship, but was filming during ‘show runs’ alongside fellow presenters Jeremy Clarkson (in a Lamborghini Aventador S) and James May (in a Honda NSX).

Clarkson had finished all his runs by the time this accident occurred, while May was the next car on the hillclimb course after Hammond – and his run was halted three corners before the finish by marshals waving yellow flags.

Hammond has already released a video from his hospital bed, while Clarkson posted a blog on his Drivetribe social media app to denounce suggestions that Hammond’s inexperience of the car was to blame: “Hammond had been driving the car solidly, on motorways, airfields and closed mountain roads for four days.

“He’d also done several runs on the hillclimb that day. He knew the car well, he knew how fast it was, and he knew how to handle it in the bends.”

Our exclusive photos, taken by Motorsport.com Switzerland's Peter Wyss – the only journalist on site at the event – shows the clearly-marked finish line after which Hammond crashed... 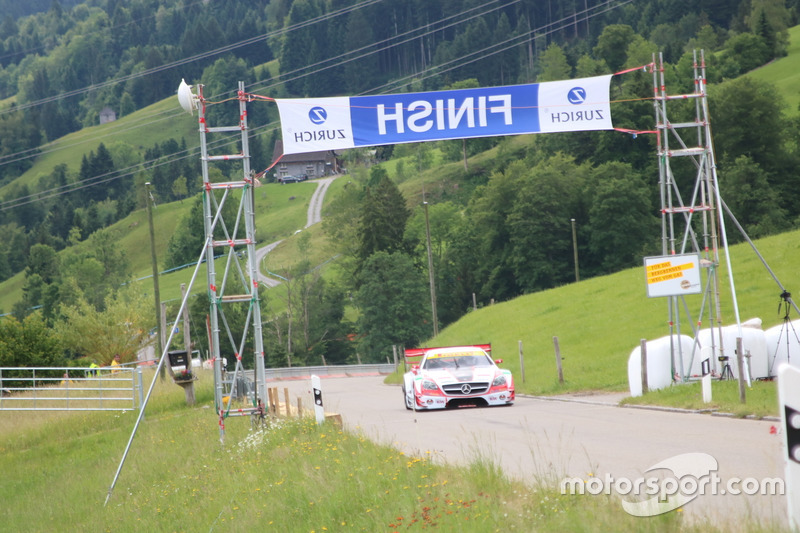 ...plus the exit of the corner where Hammond went off the road, and the hillside down which his car rolled, bouncing across another roadway before coming to rest in a meadow. 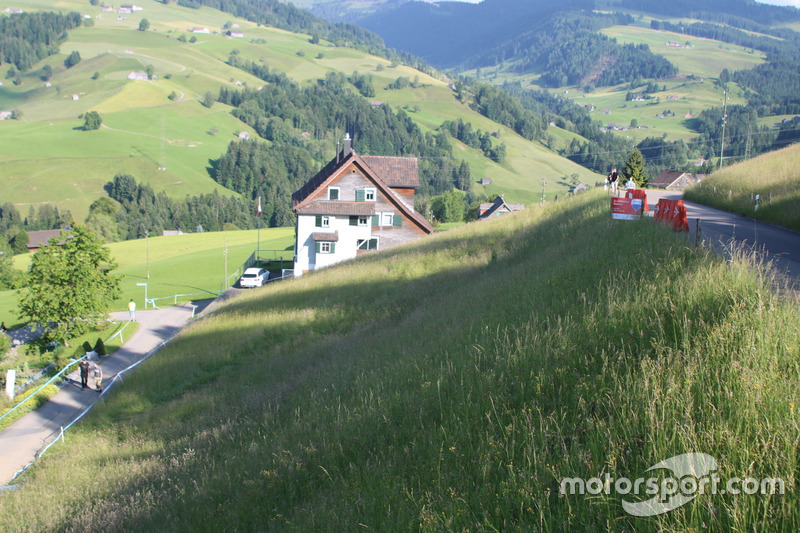 Corner of the crash after finish line