Pikes Peak: The Race to the Clouds

Colorado Springs could be the hub of the motorsports world Sunday with The 91st Pikes Peak International Hill Climb.

Colorado Springs, June 26 -- It’s not an exaggeration to say that millions of people around the world might take some part in making Colorado Springs the epicenter of the motorsports world on Sunday during the running of the 91st Pikes Peak International Hill Climb on America’s Mountain when it roars away at 8:00 a.m. (Mountain Time) after the Official Pace Car leads the way, a Range Rover Sport driven by motorsport legend and Baja racing star Gay Smith.

They can watch the race, the world’s most famous hill climb and America’s second-oldest motorsports race, with live streaming on Red Bull TV for the first time around the world via the Internet, or perhaps be one of the thousands on the course who will start to enter the venue at 3:00 a.m. when the Gateway opens, or having camped out the night before to secure the best location. They can listen live on KRDO NewsRadio 105.5 FM and 1240 AM as well.

Both broadcasts, plus live timing and results, can be available by going to www.ppihc.com and finding the link under “Follow Live” to join in the thrills and excitement. You’ll see “Watch on Red Bull TV” at the bottom of the television screen simulation. 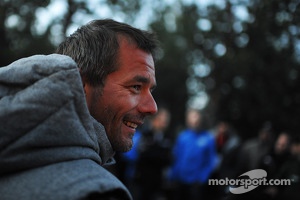 Last year, the PPIHC website received 8 million hits during the race, and with the Red Bull TV broadcast available this year around the globe, who knows how much higher that figure will grow.

Media coverage of this year’s Race to the Clouds has established a new standard for the race, which began very simply in 1916 by Spencer Penrose, founder of The Broadmoor Hotel, to bring attention to the city, the hotel and the dirt highway he carved out to the 14,110-foot summit of the Peak.

At 4:30 a.m. Sunday morning 40 media representatives will leave in two vehicles for the summit of Pikes Peak to spend the entire day, most of them photographers from a host of photo agencies with clients around the globe, almost like the Olympic Games.

Scores of other photographers will park their own vehicles at the venues before dawn and make their way to prime positions, as well as journalists representing numerous newspapers, freelancers, autosport websites, auto and motorcycle manufacturers with entries in the race and a host of magazines. There will be something like 300 media on the course in some capacity in bringing news and images to millions.

In keeping with the race’s growing international reputation, the approximately 150 entries (down this week due to crashes during practice and some withdrawls including 2012 Motorcycle champ Steve Tutt, have been received from drivers and racers from the United States, Japan, Latvia, France, Sweden, Canada, Brazil, Great Britain, Hungary, the Czech Republic, Italy, Switzerland, Scotland, Poland, Korea and New Zealand.

But based on practice and testing times this week, it may result in the first sub-nine minute mark and new records in almost every division on the fully-paved 12.42 mile course with 156 turns if the mountain and the weather cooperate with race organizers.

Sunday’s forecast for Colorado Springs itself is a high of 82 degrees with a 10% chance of precipitation, but that’s for the city, not the course, which begins at 9,390 feet and ends at 14,110 feet at the mountain’s finish line.

Fans will recall that the weather at the summit last year chipped in with hail, snow and rain in the late afternoon, with the last few divisions going back down the hill to a new finish line and a shortened circuit.

The big story this week has come in the Unlimited division because of the presence of international rock star and nine-time World Rally Champion Sebastien Loeb of France, who brings Peugeot back to the Peak for the first time since Vatanen and Robby Unser won back-to-back Open Rally titles for the brand in 1988 and 1989. Loeb will be driving a Peugeot 208 T16 Pikes Peak model, which has been specially built for his assault on the Peak, and his recent practice times were phenomenal during his first tests on the course. His time on the lower portion this morning in his second run was a blazing 3:26.153, some 17 seconds faster than Dumas. The fastest qualifier in each division gets to go first on Sunday. 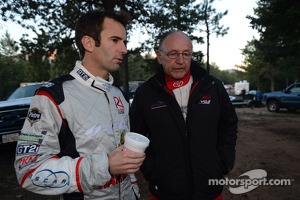 As it has been in the last decade, big-time attention will be focused on the prestigious Unlimited division, with the loaded field featuring two drivers who took turns in breaking the all-time course record during last year’s race, French star Romain Dumas (9:46.181) and the veteran Rhys Millen (9:46.164), among a field of 13 drivers with a wide variety of autos and engines.

Millen set the course record of 9:46.164 in winning the Time Attack division last year, and Dumas broke the old mark a bit earlier in the race by clocking 9:46.181 in winning the Pikes Peak Open division. Both drivers moved to Unlimited this year, setting up a classic showdown in the same field.

Dumas, last year’s Rookie of the Year, will be joining the big cars in the Unlimited field this year with a brand-new Norma M20FCPP prototype entry in hopes of even a faster time on the asphalt.

Millen has entered in a racy Hyundai PM580T to attack the course after setting the record last year. In an interesting twist to all of this, he has loaned the auto he drove to the record last year, a Hyundai Genesis Coupe, to the veteran Paul Dallenbach (Basalt, CO), who becomes one of the favorites this year in the Time Attack division.

The talent-heavy Unlimited field also includes French veteran Jean-Philippe Dayraut, driving a specially-prepared 900 HP ”No Limit” Mini Countryman for the first time on the Peak. Dayraut was third in the Unlimited division in 2011, driving a VIP Challenge Dacia Duster and winning Rookie of the Year honors.

In fact, the practice times this week of three French drivers, Loeb, Dumas, Dayraut and New Zealander Rhys Millen may be the fastest pre-race test clockings in the event’s storied history.

Lots of attention is being centered in the Electric Auto division, where one of the race’s legends, Japan’s Nobuhiro “Monster” Tajima, is entered again in his Pikes Peak Special E-Runner, which caught fire last year and forced the former course record holder and the first to crack the ten-minute mark, out of the race. Tajima won the Unlimited division nine times on the Peak before going Electric last year.

He will be up against another of the event’s legends, Rod Millen, the father of Rhys Millen, a 10-time winner at Pikes Peak, six of them in the Unlimited field and the others in Pikes Peak Production, Pikes Peak Open, High Performance Showroom Stock and most recently, the Time Attack crown in 2011.

Millen will be driving a new Toyota TMG EV POO2 model in the Electric field, which now numbers seven entries, including one of the year’s biggest surprises.

Mitsubishi has entered six-time Pikes Peak motorcycle champion Greg Tracy in the Electric Auto Division in one of its two MiEV Evolution II four-wheel drive prototype race cars. The decorated Tracy, who has never been behind the wheel of an auto on the Peak before, was second a year ago in the blazing 1205cc motorcycle division behind champion Carlin Dunne, who set the all-time bike record of 9:52.819, while Tracy also shattered the elusive ten-minute mark with his clocking of 9:58.262.

The Electric field also includes two-time Champion Ikuo Hanawa of Japan, behind the wheel of a Summit HER-02.

The Time Attack division has a record 23 entries, including last year’s winner in the Unlimited division, David Donner of Colorado Springs. He the latest member of the famed Donner family to race on the Peak, following Robert, Robert, Jr. (David’s father), and Robert III. He has chalked up two wins in the past in the Open Wheel division on top of his 2012 crown in Unlimited and his practice times this week have opened some eyes of veteran observers. 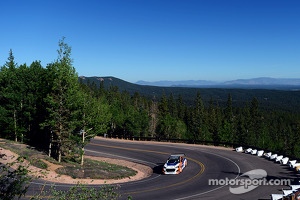 All eyes in the Motorcycle field will be focused squarely on record-setting Carlin Dunne (Santa Barbara, CA), who set the course mark for bikes last year in winning the Pikes Peak 1205 division with a clocking of 9:52.819 on a Ducati Multistrada. He’s back this year, but this time he will be racing a new Lightning Electric Super Bike, rumored to be the fastest production bike in the world, electric or fuel-based, in the Exhibition Powersports division, with an expectation of a new course record after his blazing testing times on the hill this week and last weekend.

More than 30,000 fans are expected to attend. This event is FREE and features a large Budweiser beer garden, Firefighter chili cook-off for the fans and more fun for race fans and families.

Downtown business owners Sam and Kathy Guadagnoli, on behalf of The Mansion and Blondie’s, will present the Red Bull Jumpers and Skydivers.

Top race qualifiers will display their vehicles (cars, quads, motorcycles, etc.), give driver demos and be present for autograph sessions. In addition, the PPIHC mobile museum will be on-site and exclusive PPIHC merchandise will be available for purchase. Tickets to the 91st running will also be on sale.

What are you doing this weekend? Pikes Peak Edition