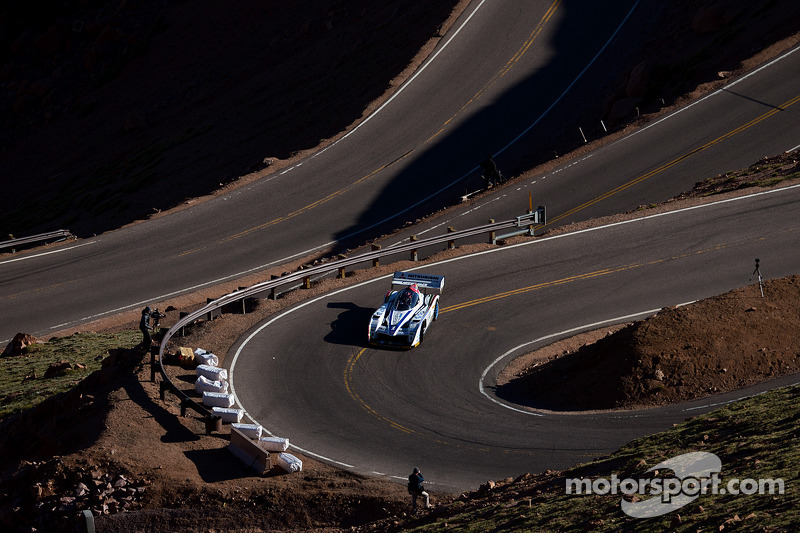 During the 91st running of the world’s most famous hill climb, Nobuhiro “Monster” Tajima's title came in the Electric Auto division where he set a new record.

Colorado Springs, June 30 - Nine-time Unlimited division champion Nobuhiro “Monster” Tajima of Japan switched from his traditional gasoline-powered past to the Electric Auto division last year at the Pikes Peak International Hill Climb, but his first attempt failed when he had to shut down because of an onboard fire.

But not so today during the 91st running of the world’s most famous hill climb.

Tajima piloted his electric 2013 E-Runner Pikes Peak Special to victory with a new Electric record clocking of 9:46.530, which even surpassed the 9:51.278 he turned in during the 2011 race in a Suzuki SX4, the first driver ever to crack the Peak’s elusive ten-minute barrier.

Veteran driver Paul Dallenbach (Basalt, CO), won the Time Attack division with a time of 9:46.001, driving the Hyundai Genesis Coupe that Rhys Millen drove last year and bettering what was then the all-time course record of 9:46.164. Both Millen and Dallenbach are sponsored by Hankook Tire.

That mark fell early this afternoon when nine-time World Rally Champion Sebastien Loeb of France demolished it in the first run in the Unlimited division, roaring up the 12.42 mile course to the summit of Pikes Peak in a blistering time of 8:13.878 in a Peugeot 208 T16 Pikes Peak model that left the crowd of several thousand fans lining the course stunned.

Loeb averaged 87 miles per hour while setting the record. Rhys Millen was a distant second with a time of 9:02.192 in his 2013 Hyundai PM580T, the second-fastest time in the race’s history, and Jean-Philippe Dayraut of France also topped Millen’s previous record with a time of 9:42.740 while driving a 2011 Mini Countryman.