If you ask longtime fans of the Pikes Peak International Hill Climb, they’ll tell you that their second-favorite event of Race Week is the amazing Fan Fest. 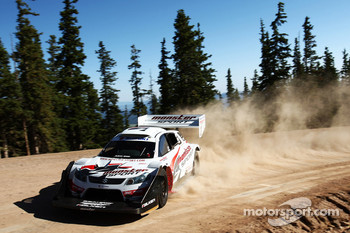 The Red Bull Air Force is a team assembled from the most accomplished and experienced skydivers, BASE jumpers, wingsuit fliers, and paraglider pilots on the planet. With gold medals in virtually every discipline and numerous world records to their credit, the team members combine for over 100,000 skydives and 6,000 BASE jumps.

The jumpers on Friday night at 7:20 will be Jon DeVore, Sean MacCormac, and Travis Fienhage and they are set to land downtown at about 7:30 from the air near the Red Bull Ramp between Pikes Peak and Kiowa.

Throughout the year they perform more than 60 demos including air shows, NFL games, and NASCAR and motocross races, as well as skydiving, BASE jumping, and paragliding competitions in the U.S. and abroad. On screen, their expertise is in demand from Bollywood to Hollywood. They were selected to be some of the wing suit stunt flyers in the 2011 Blockbuster Transformers 3. These all-out wild men have kayaked out of airplanes, ski BASE jumped off a 30-story casino, and developed a form of “freeflying” that allows the skydiver to reach speeds of nearly 340 miles an hour. No wonder they’ve been mistaken for UFOs!

Fans also get to meet the drivers and racers up close and see their automobiles and motorcycles. More than 50 competitors will be downtown with their autos or motorcycles, including King of the Mountain Nobuhiro Tajima, Paul Dallenbach, Layne and Randy Schranz, Jean-Philippe Dayraut, Ikuo Hanawa, Savannah Rickli, Jimmy Keeney, Steve Goeglein, and Cody Loveland.

They will display their vehicles or bikes, give driver demos and be present for photo and autograph sessions.

In addition, the PPIHC mobile museum will be on-site and exclusive PPIHC merchandise will be available for purchase. Tickets to the 90th running will also be on sale. General admission tickets will go for $40.00, a ten-dollar savings over tickets purchased on Race Day at the toll gate. Family Four-Pack general admission sets go for $135.00 at Fan Fest.

Race sponsors will have individual booths and displays and a full array of exhibitors will be part of the menu of activities.

The Colorado National Guard will operate a climbing wall, a tug-of-war contest and basketball toss action for fans, especially kids.