After the first two sectors on Wednesday and Thursday, Romain Dumas returned to the third and final segment of the famous Pikes Peak road.

After signing the second fastest time in qualifying on Wednesday ahead of the Pikes Peak International Hill Climb, and confirmed the same performance during Thursday’s free practice, Romain Dumas took part in the final session on Friday, run on the highest and final portion of the course. 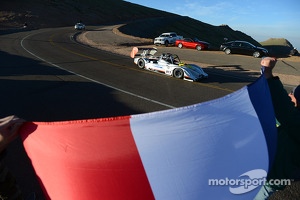 The French driver was again among the top times, behind Sébastien Loeb, but ahead of other competitors including 2012 winner Rhys Millen.

After the first two sectors on Wednesday and Thursday, Romain Dumas returned to the third and final segment of the famous Pikes Peak road - part of the course that is characterized by its bumps and several blind corners.

Despite an alternator problem which prevented him from taking part in one of the three runs up the sector, Romain once again confirmed his place as the top underdog leading into the event with the second fastest time.

« The morning wasn’t as rich in information as we’d hoped, but the overall feeling is rather positive » said Romain Dumas. « The alternator problem was a bit annoying especially since it kept me from another run on a portion of the course that is quite challenging. That said, I’d like to thank Peugeot Sport for letting us borrow a battery, and we were able to return to action.

The first run was more of a warmup, while the second run allowed us to end the practice days on a positive note. With the altitude, we’re suffering with the lack of power, but we’re trying to compensate with our extremely light weight. As for the results, taking Sébastien Loeb out of the equation, we’re rather satisfied. »

After four days of testing and practices, the moment of truth is fast approaching. For the race, competitors will tackle the Pikes Peak course in its entirety and in one go. Romain Dumas remains realistic but optimistic at the same time.

« Sébastien Loeb and Peugeot have shown their strength and their speed. They are naturally the favorites to win. That doesn’t mean we don’t have something to prove with our Norma M20FC PP. The car is agile and handles well in the fast corners. The guys did such a superb job that we’re not going to throw in the towel now.

My dream remains to win Pikes Peak, even if it will be very difficult this year. The first objective is to be the first of the underdogs, ahead of Rhys Millen, Jean-Philippe Dayraut and others. We’ll have to be flawless to accomplish that goal. After that, we’ll do our maximum to finish in the highest position possible. »

The 91st edition of the Pikes Peak International Hill Climb will start on June 30 at 8am local time. Romain Dumas will start from the second position in the « Unlimited » class, the top category in the race.