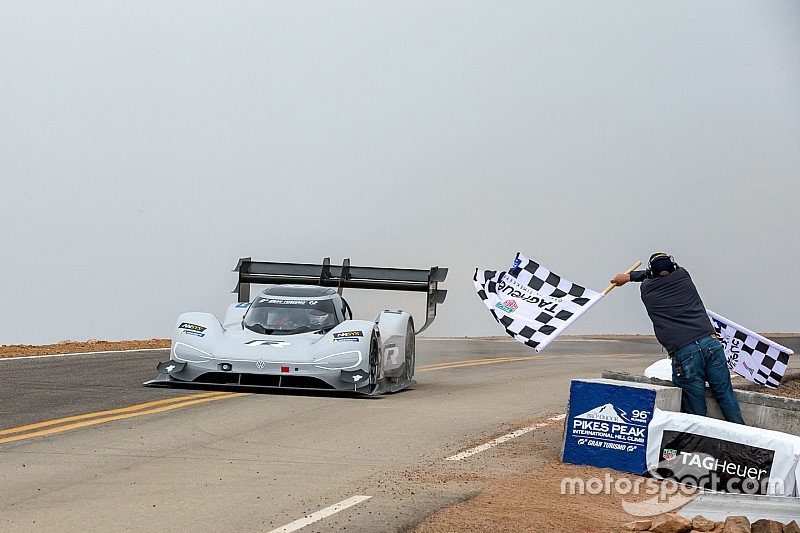 The Frenchman’s run at the Colorado course was delayed after an earlier competitor crashed, injuring a spectator, before the 40-year-old set a time of 7m57.148s.

“I had some fog and it was quite humid with some damp in the second section,” Dumas said from the 14,115ft summit of Pikes Peak. “I’m happy with this, but we could have gone quicker if that middle sector had been dry.”

The German manufacturer arrived in America chasing an electric vehicle record of 8m57.118s, but early qualifying times indicated the potential for an outright record. Ahead of Sunday’s run, Dumas was in confident mood – asked how sure he was of Rhys Millen’s EV record he said: “120 per cent!”

But Loeb’s time was the bigger question.

Throughout the week Volkswagen played down talk of going below eight minutes, but in the end the only difficulty came with the weather, with cloud moving in and across the mountain and the threat of rain. Ultimately the rain held off, but the run was hindered by cloud.

Volkswagen Motorsport director Sven Smeets told Motorsport.com: “I am so happy for this team and really proud of them. We all worked so hard for this.

“And for Romain, this is incredible – don’t forget this was the first time he drove the whole course in this car. In testing, he never had a clean run from the bottom to the top.”

“Waiting for 45 minutes to start the run was so stressful,” he said. “I don’t want to go through that again. And then the timing went down and we had no sector times, it felt like it was taking one hour!

Volkswagen technical director Francois-Xavier Demaison added: “We knew we had the speed, but when we had some technical issues, things like how we were managing the battery, we learned a lot in the last few days.

“The magic of this race is that you don’t know what you get from the mountain, but today it was OK. For sure, Romain took some risks to make this time – it’s all out. This is a fantastic result.

"It was not possible for us to say when we arrived that we had come here to beat the time of Peugeot – but I’m glad we did!”

Behind the scenes with VW...