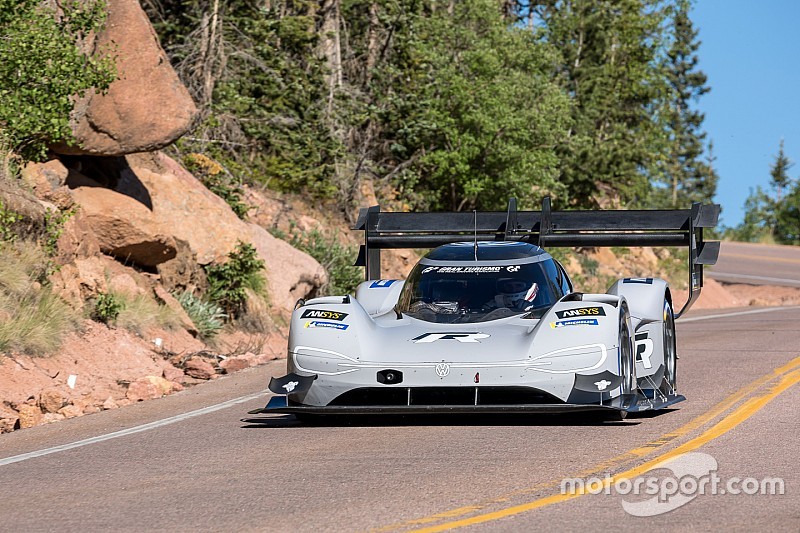 Pikes Peak record holder Romain Dumas believes he could lower his new benchmark by a further 10 seconds if Volkswagen returns to the hillclimb with its electric I.D. R.

But the 40-year-old was adamant the car is capable of going even faster.

"I knew the time was good,” said Dumas. “I didn’t have any sector times, but as a driver, you know.

"The first sector was good, in the second it was humid and I had some fog. I took no risks here.

“I dropped four or five seconds. We didn’t look in detail, but the Tarmac was cold because of the fog and the grip was not so good.”

Behind the scenes at VW's record run

Asked by how much he thought he could better his record, Dumas said: “Minimum 10 seconds, but you need the perfect day - who can [guarantee] you’re going to get that.”

Dumas’ run was delayed by an accident for an earlier competitor and, within a couple of hours of him breaking the record, snow was falling in the third sector, which forced officials to shorten the hillclimb for later runners.

“I could see the cloud coming in and out,” Dumas said. “I decided to stay in the car, but I was not sure [what the time would be].

"I could see Demaison's face and his stress. I was thinking, 'Ooh, look at the cloud, this will be complicated'. We could not expect more from the run.

“When I got out of the second sector, the fog went and the grip came back at the top. I knew it was good, I braked early for the final hairpin to take no risk.”

The project was only signed off last September, and Volkswagen Motorsport team principal Sven Smeets said an extra two months’ development would have resulted in a quicker time.

Volkswagen was not permitted to run up Monte Ventoux, the French road most similar to Pikes Peak – and where Peugeot did key development work on Loeb’s 208 T16 – because it would have meant closing the road during a holiday.

“We were missing development and testing time,” said Smeets. “When we wanted to start running the car in Europe we had snow and really bad weather in Europe in May.”

Just a couple of weeks before the attempt, Volkswagen was still struggling with the I.D R's set-up and with getting the best from its battery.

“Even in the last week we found some small issues,” said Dumas. “In the last practice session I found a new way to drive around the last corner to avoid the bumps – this was again faster.”

It was during that last week that Loeb’s effort – and not just Rhys Millen’s 8m57.118s electric record – came into view.