Cold and cruel? Yes, Pikes Peak can be both, but we keep coming back

For a motorsports journalist, covering Pikes Peak is unlike any other event in the U.S.

And for competitors, and fans, it’s different, too. See the gash taken out of the right front fender in the green Cobra in the photo? It was made last year not when the car hit one of the huge boulders that line the road, but when it hit a woman with a camera who was leaning out too far. She survived. The camera, not so much.

It’s hard to criticize the fact that when 54-year-old Bobby Goodin crashed his Triumph motorcycle after crossing the finish line at the summit yesterday in the 92nd running of the Pikes Peak International Hill Climb, it took paramedics some 10 minutes to reach him, and an hour for the helicopter to arrive and fly him to the hospital.

By all accounts, it was too late anyway – Goodin apparently raised his hand in a gesture of triumph as he crossed the finish line, which happens to be where the pavement turns to dirt, and he lost control. The bike hit a boulder, and he tumbled until he landed face-down on the rocks.

As famous as it may be, this is, after all, a very small event. This year, officials said they may limit ticket sales to 4,000, and they clamped down on where those fans would stand to watch the race – the starting line, and five other spots up the mountain. Competitors, media and officials are the only ones allowed at the top. 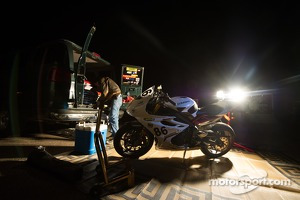 This year I was at the Houston Grand Prix, but last year I was at the summit of Pikes Peak, a bizarre year weather-wise where we got bright sun, rain, sleet, snow and fog so thick you could barely see 50 feet – pretty much all within a two-hour period.

So we spent a lot of time in the little meeting room, next to the cog railway station, where they had three things that were essential for existence there: Heat, water, and a startlingly good internet connection.

The handful of writers covering the event have to be on top long before the event starts, and you are there until long after it’s over. The motorcycles ran first, and Bobby Goodin was there early, wide-eyed, marveling at his first trip up the mountain. He was riding an Aprilla then, and we spoke briefly when I learned he was from the Dallas-Fort Worth area, where I had spent 11 years.

A good guy, I recall, excited to have crossed a major item off his bucket list. And yes, he thought he might come back next year.

The thing that has struck me most covering Pikes Peak is how jangled and disjointed it all is. Officials try and stay in touch by radio, but it’s tough. The anchormen on the radio broadcast (KRDO, 1240 am) are often laughably behind what is actually happening, and the dissemination of information is tightly controlled. Last year a bike launched into the woods and started a fire: We knew it happened, but never got official confirmation. There were drivers, riders and spectators injured, but it was well into Monday before anyone would even attempt to offer updates on conditions.

Granted, the altitude and the terrain is a challenge, but organizers need to move into the 21st century because the technology exists to tie all this together. Unless you were such a star rider or driver to merit having a chase helicopter follow you all the way up the mountain, your run was logged in bits and pieces.

Unless, of course, you had a GoPro camera, which Goodin had mounted to his helmet. We’ll never see the footage, and that’s fine – but overbearing authorities at the top who confiscated photographers’ SD cards from their cameras, and threatened others taking photos, are living in the past. When you are competing in public, even dying isn’t private any longer. That said, the official Spectator Guide warns you that this sort of thing might happen: “Each spectator is expected to obey request from PPIHC Course Marshalls, Crowd Control Staff, race officials, Pikes Peak-America’s Mountain Rangers, and Staff and Law Enforcement. Any spectator who ignores request will be subject to expulsion and/or criminal charges.”

Bobby Goodin wasn’t the first competitor to be killed on the mountain, and he won’t be the last, as long as the invitation exists to hop aboard the fastest car or motorcycle you can find and race from 9,300 feet in elevation up to 14,115 feet, covering 12.42 miles and 156 turns. There’s a reason why sections are marked with names like Devil’s Playground, Ragged Edge and Bottomless Pit. 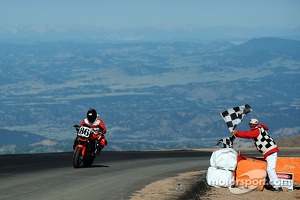 But he knew the risks, and the rewards. Believe me, you can’t approach that mountain and not know that there’s a chance you won’t be coming back.

Remembering the fallen, racers we lost in 2014