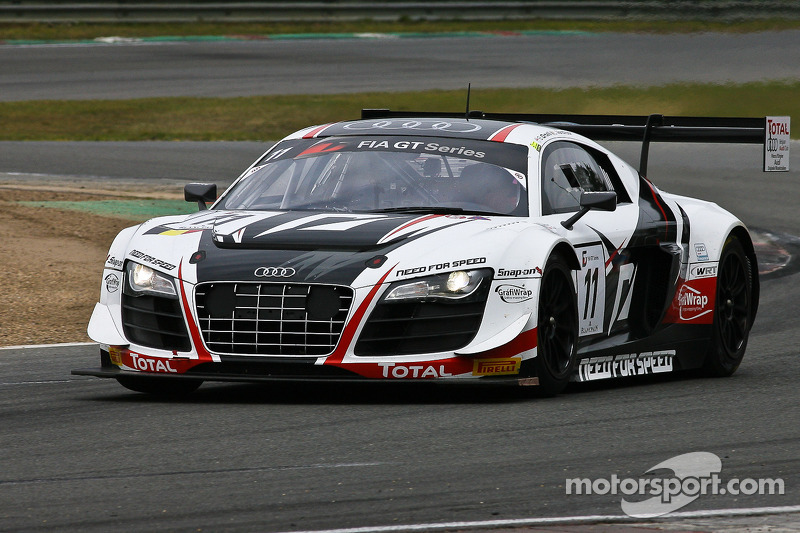 Two fascinating free practice sessions took place at a sunny Circuit Park Zandvoort today, with Belgian Audi Club Team WRT and HTP Gravity Charouz topping the time sheets respectively ahead of Saturday's qualifying session and qualifying race. In the Pro-Am Cup HTP Gravity Charouz were dominant, leading the field in both of the 80-minute practices ahead of a potent mix of marques all vying for the top class position.

A hazy sky welcomed the twenty entrants for the third round of the FIA GT Series, but the weather quickly improved as the sand dunes that surround the coastal circuit reverberated to the sound of the powerful GT machinery.

Championship leaders Stephane Ortelli (MCO) and Laurens Vanthoor (BEL) were quickest in the morning, a 1:39.695 set some fifty minutes into the session was good enough to see them finish fastest, but the Audi pair didn't have it all their own way as seven different drivers traded fastest times at the head of the field, including a number of Pro-Am Cup entries.

It was Wolgang Reip (BEL) who initially posted the fastest time of the day in the Nissan GT Academy Team RJN Nissan GT-R GT3, but Jan Seyffarth (DEU) soon bettered the Nissan driver's effort with a 1:42.539, the HTP Gravity Charouz racer then improved his time further with a 1:40.955. 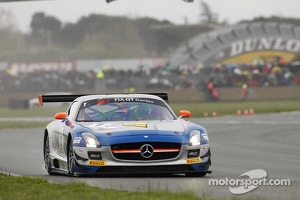 Debuting in the FIA GT Series this weekend, local driver Melroy Heemskerk (NDL) wasted little time acquitting himself with the front of the field and the BMW Sports Trophy Team India man went second quickest to Seyffarth, before a lap later deposing the Mercedes with a 1:40.690; his knowledge of the circuit proving valuable.

Russian driver, Sergei Afanasiev, seized the opportunity and took six tenths off Heemskerk's best; the HTP Gravity Charouz Pro-Am Cup entrant and his team-mate Andreas Simonsen (SWE) were a potent pairing throughout both free practice sessions, Simonsen taking the pair to second in the afternoon practice.

Unfortunately for Afanasiev and Simonsen, the Pro Cup entry in their team had itself setup well for the Zandvoort circuit. Maximilian Buhk (DEU) and Alon Day (ISR) led both the first and second free practice sessions for lengthy periods of time. Despite a brief off for Buhk in the morning, the pair finished second, before improving by one place in the second session of the day.

A red flag in the morning for the wayward BMW of Caca Bueno (BRA) halted proceedings briefly, but with under twenty-minutes left following the restart, teams flooded the circuit attempting to better their times. It was now that Vanthoor struck and went quickest, only a slow puncture would prevent the Belgian from going quicker. 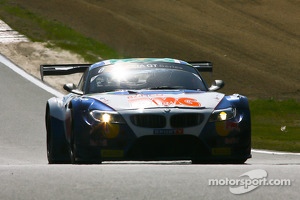 The Pro-Am cup was dominated by Afanasiev's time, but a pacey AF Corse Ferrari 458 Italia GT3 in the hands of Felipe Salaquarda (CZE) was second in class, sixth overall. Heemskerk finished the morning third in class, seventh overall ahead of Lucas Ordonez and Alex Buncombe, the Nissan GT Academy Team RJN drivers blossomed as the session progressed.

The afternoon brought a very close session where the top eleven cars were covered by just one second, Buhk and Day finished on top overall in the Pro Cup class, with HTP Gravity Charouz team-mate Simonsen's lap of 1:39.582 putting the Pro-Am Cup entry a strong second overall.

Mayr-Melnhoff and Rast were second in Pro Cup, third overall, and clearly found a happy balance that enabled the pair to push hard in their Audi, despite an off for Mayr-Melnhof when trying to better his time.

A strong performance by the all-Brazilian driving duo of Allam Khodair and Bueno ensured the BMW Sports Trophy Team Brasil drivers finished third in the Pro Cup, sixth overall. Just behind them was the Kumpen/Ide Audi and the #9 Sebastien Loeb Racing McLaren MP4-12c of Sebastien Loeb (FRA) and Alvaro Parente (PRT), fifth in class, eighth overall in the second session, an improvement on the morning where the pair finished sixth in class, tenth overall.

In the wake of Simonsen and Afanasiev, Salaquarda and Onidi were second in the Pro-Am Cup (fourth overall), Onidi was extremely happy with the progress the Ferrari squad have made in recent weeks. Third in class was the GRT Grasser Racing Team Lamborghini LP560-4 of Austrian racer Hari Proczyk and Dominik Baumann (DEU) with a 1:40.002.

Fourth in Pro-Am Cup (twelfth overall) in the afternoon was the #35 Team RJN Nissan of Ordonez and Buncombe, ahead of the Heemskerk and Ebrahim BMW which was fifth in class, thirteenth on the road.

Across both sessions the Gentlemen Trophy entrants Petr Charouz (CZE) and Jan Stovicek CZE) progressed in their Mercedes SLS AMG GT3, the pair were within five seconds of their nearest rivals in both morning and the afternoon running, with a lot of positives to be taken.

The action continues tomorrow with Qualifying Practice at 09:00 CET before the Qualifying Race gets underway at 13:45.

Laurens Vanthoor, #11 Pro Cup Belgian Audi Club Team WRT Audi R8 LMS Ultra: "Everything was feeling good. We still have some small things to work on but we are confident for tomorrow. I think the Audi is good on this track but the Mercedes is a bit stronger in my feeling.

The tyre degradation is quite hard here because the track is so abrasive so we will see which kind of cars will go the further with the tyres, I hope it is us! Maybe we are not the quickest on one lap but can be the best during the race, we will see. As we had to put a new set of tyres in the morning because of a slow puncture, it was harder this afternoon."

Alon Day, #1 Pro Cup HTP Gravity Charouz Mercedes SLS AMG GT3: "It was not so bad, I think the track really suits the Mercedes car. My team-mates were also quick, we were almost in the same time. Yet, there are always things to improve so we will see tomorrow in the qualifying. It was my first time on that track and it is a nice track, fast…I am pretty sure that we can challenge the front row tomorrow."

Sergei Afanasiev, #2 Pro-Am Cup HTP Gravity Charouz Mercedes SLS AMG GT3: "It is a very exciting circuit, which has its own history. It is a pleasure to be there with GT, we are doing quite fine, the SLS are good on this track…it is lovely! I am glad that all our team is moving in fast equal times. We have to develop ourselves and just collect points for the championship. Zandvoort is a sunny place with a lot of smiling people so that is great."

Fabio Onidi, #51 Pro-Am Cup AF Corse Ferrari 458 Italia GT3: "I think we're good now, we're happy with sixth and fourth. It is nice to be competitive and I think we'll do well tomorrow, despite the fact I haven't driven here since 2008; it is fun to drive here and the Ferrari works well on the Pirelli tyres."