The podiums keep coming for the Nismo athletes at Zandvoort

A weekend at the beach resulted in more podium joy for the Nissan GT Academy Team RJN squad today, leaders of the FIA GT Series Pro-Am Championship. Racing by the sand dunes of Zandvoort in Holland, the No.35 Nissan GT-R Nismo GT3 of Lucas Ordonez and Alex Buncombe took second place in class in this afternoon’s main race bringing the tally of podiums in Nissan’s last three GT3 races to three out of three.

As with all FIA GT Series race meetings, there is a qualifying race on Saturday afternoon, the result of which sets the grid for the main race on Sunday. Wolfgang Reip had a good start in the No.32 GT-R but after only one lap he was involved in an unavoidable accident when another car spun in front of him and left him with nowhere to go other than for an early bath.

Al Buncombe also had a tough beginning when he picked up a puncture from all the debris that came onto the track after the lap one shenanigans. After cruising back to the pits for fresh rubber he got back into the race where he, and later Lucas, made sure and steady progress to get up to 13th place, which would be their grid position for the main race. 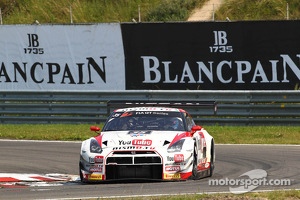 After retiring from the qualifying race, the No.32 GT-R would start today’s race from the second to last row of the grid, just ahead of Sebastien Loeb’s McLaren. Mark Shulzhitskiy had the first run in the car during morning warm up after it was repaired overnight on Saturday and duly topped the timesheets. The Russian racer was at the wheel for the start today and he made a good getaway.

Further ahead Lucas had made a great start in the No.35 Nissan GT-R Nismo GT3 but after just five minutes of racing the red flags came out after a big accident on the start/finish straight. All of the cars had to stop on the grid while the track was cleared.

The race restarted under the safety car and both Mark and Lucas made good starts. When the pit window opened Mark handed over the No.32 Nissan to Wolfie and, leaving all the problems of the previous day behind them, they brought the GT-R home in 11th place overall, which was fifth in class.

Lucas had his hands full once the race restarted. He had made up a few places but was then battling with the Mercedes of Karun Chandhok. After some hard racing the team decided to bring Lucas in as soon as the pit window opened so that Alex could join the race in clean air.

Alex’s drive to eighth place overall earned the duo second place in the Pro-Am class and another hard-earned podium.

“I was very pleased with the performance of all of the drivers today,” commented RJN team boss Bob Neville. “Wolfie and Mark showed that they can keep their cool in difficult situations like accidents and red flags. They gathered it all up and drove very well today, taking a good fifth place. I should mention the team as they had a bit of a late night fixing the No.32 GT-R but I should also mention that the drivers mucked in to help! Lucas and Alex drove how they always drive. They make a great team and it was good to see them take another podium today. They deserve it after all of their hard work.”