During the period between 2003-2011 SRT achieved numerous successes, ranging from the Belgian championship through to first places in the illustrious FIA GT.

SRT, Selleslagh Racing Team: a name far from forgotten in the GT racing world. In 2003 the Belgian team was the first that dared to bring over a powerful Corvette C5.R from Detroit to Europe and enter this legendary V8 on the circuits.

In 2011 the Belgian team concluded an era with a brilliant victory in the final of the World Championship for GT cars in Argentina with a Corvette C6.R GT1. 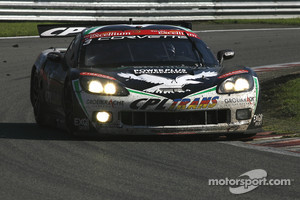 But now SRT is back, and how! The team run by Patrick and his son Niels Selleslagh recently acquired a Corvette C6 GTE and will be entering the car in the International GT Open and elsewhere also. The chronicle of a comeback…

During the period between 2003-2011 SRT achieved numerous successes, ranging from the Belgian championship, over two brilliant wins in the 24 Hours of Zolder, through to first places in the illustrious FIA GT and the highly rated World Championship GT1. The team was never unfaithful to Corvette and Pratt & Miller, and the close links with the race car constructor from Detroit is and remains good and intact.

Patrick Selleslagh: “In 2011 I announced my farewell and my son and I then worked for two years behind the scenes for a Dutch Corvette team, with a title in the Supercar Challenge and a team title in the International GT Open as outcome. As such the ties with Corvette was not broken and during the course of these last few month the idea grew to go back into action ourselves.

With this comeback I will in fact be handing over the torch to my son. He, together with a few young collaborators will run SRT, whilst I will obviously still be standing by. However the future is up to them. Niels will be heading up the team, but it goes without saying that he can always count on my support and if required my expertise also. I will also still be present at the races.”

Niels Sellleslagh is not an unknown entity in the racing world, as he has already spent many years in his father’s team, more specifically in the technical field.

Niels Selleslagh: “From a very young age I have worked on the Corvette and the car became my passion, part of my life in fact. So I’m really delighted that we are back on the scene and we have the new car in our workshops in Merchtem. The car is the one in which Tom Milner, Oliver Gavin and Richard Westbrook competed at the 24 Hours of Le Mans in 2013, a Corvette C6-ZR1 GTE. We have fitted the car with a 7 litre power unit and ABS, whereby the car is illegible for the International GT Open. In reality this car is unique, in fact without further ado a car to clinch victories. We are presently discussing matters with various parties, however all options remain open.

The car can also be entered in the BRCC or the Supercar Challenge, two competitions in the Benelux, or elsewhere, should there be a demand. It goes without saying that we remain faithful to our tradition and philosophy, in other words, a small team, but with a highly professional approach. We are also working very closely together with Pratt & Miller, something we have always done and will continue to do. I’m fully confident that in 2014 that we will be up to holding our own and will be working in close cooperation with my father.”