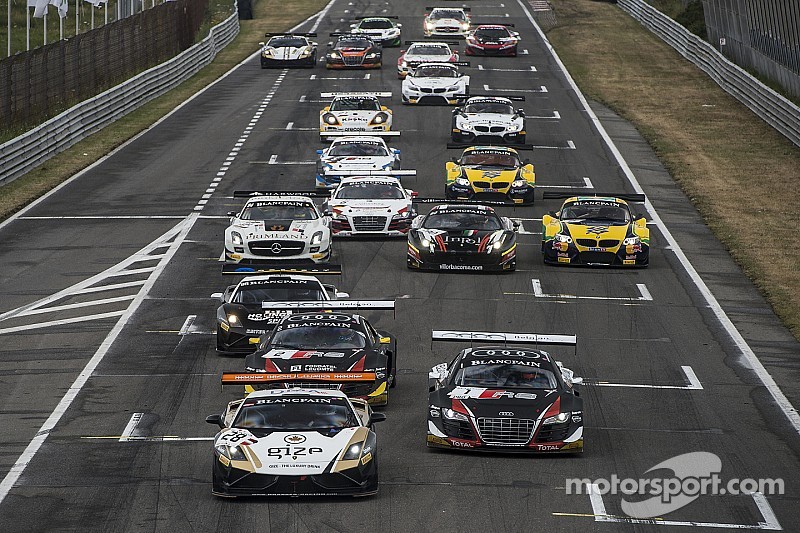 The fifth round of the Blancpain Sprint Series will be held next weekend at the Autódromo Internacional do Algarve, near the Portuguese town of Portimão.

The most recent Sprint Series event, at the Slovakiaring, produced some eventful races, with a surprise result at the end. Everything is set for the Portuguese race to be at least as exciting.

After Main Race wins for Mercedes (Nogaro), Lamborghini (Brands Hatch) and Audi (Zandvoort), the Sunday Race at the Slovakiaring produced the first Blancpain Sprint Series win for BMW. Through two of its Sports Trophy Teams – Team Schubert and Team Brazil – the Bavarian brand scored a 1-2. It was the Austrian pairing of Thomas Jäger and Dominik Baumann, only competing in their second Blancpain Sprint Series event, who claimed the 30.000 euro cheque attributed to the Main Race winner.

From now on we should really give it our all, starting at Portimão.

However, their rivals have vowed to get revenge as quickly as possible. Leading the driver standings is HTP Motorsport Mercedes-driver Maximilian Götz. Due to the absence of his regular team-mate Maximilian Buhk at the Slovakiaring, Götz is now the only driver in the Series who has scored points in every race of the season. The German is determined to continue that streak under the Portuguese sun.

One of the crews hit by the crash at the start at the Slovakiaring was the Grasser Lamborghini pairing of Hari Proczyk and Jeroen Bleekemolen. The Austrian-Dutch pairing will try hard to make up for that DNF this weekend, since there are only two Blancpain Sprint Series events left after the races at Portimão.

One of the new combinations at the Portuguese track will be the G-Drive duo of Roman Rusinov and Tomas Enge. The squad, absent at the Slovakiaring, has switched from Audi to Lamborghini, in an attempt to repeat their Nogaro performance, when Stéphane Ortelli and Grégory Guilvert finished second in the main race.

Local fans will certainly cheer for the two Mercedes SLS AMG GT3 cars entered by the Sports & You team, as the Italian squad will enter two cars in the Pro-Am Cup for four Portuguese drivers. One will be driven by Paulo Pinheiro and Francisco Mora.

The latter celebrated his 18th birthday only last week, which on race day will make him a mere two days older than Pro-Am standings leader Alessandro Latif on his debut in Nogaro in April. The cockpit of the other car will be shared by Antonio Coimbra and Luis Silva who previously shared a car in the Algarve round of the FIA GT3 European Championship in 2009.

The leaders in the Silver Cup, the category exclusively reserved for pairs of young Silver driver aged 25 or under, had a tough weekend in Slovakia. It was the first time that Vincent Abril and Mateusz Lisowski were beaten in both Qualifying and Main Races. On Saturday a rare mistake by Abril on the final lap handed the win to their main rivals in the Series, the Italian pairing of Fumanelli and Colombo.

On Sunday, the Silver Cup category was dominated by Series newcomers Lucas Wolf and Luca Stolz. The HTP Motorsport duo is aiming for a repeat performance at Portimão, but Abril and Lisowski are determined to get back to their winning ways as well. Exciting racing guaranteed!

Jeroen Bleekemolen (#28 Grasser Racing Team Lamborghini): “The crash at the start of the Slovakiaring Main Race has cost us important points for the championship. It makes me even more determined to do well and make up for that. From now on we should really give it our all, starting at Portimão. I think we shouldn't think about the points anymore and just try to fight harder for race wins. Because that is what we need to win the championship.”

Thomas Jäger (#76 BMW Sports Trophy Team Schubert): "For me the track is completely new. But I already familiarized myself with the layout and I´m sure to have enough time during the practice sessions to learn all the details. As far as the set-up of the car is concerned I still benefit very much from the experience of the team and my teammate Dominik. We´ve had a good run so far. That´s why we travel to Portimão in a really good mood."