The sunny weather that blessed Zandvoort over the weekend brought well to the Belgian Audi Club Team WRT, which left the track in the dunes of the popular beach resort in the Netherlands with a strengthened leadership in both the Drivers’ and Teams’ rankings of the FIA GT Series. Although clearly not the fastest cars on the track, the Audis R8 LMS ultra of the Belgian squad took heavy points thanks to good pace and perfect races by its drivers and pit crews. Stéphane Ortelli and Laurens Vanthoor won the Qualifying race on Saturday and took second on Sunday, reinforcing their points lead. Edward Sandström and Frank Stippler strengthened their second position thanks to a fourth and a third, respectively. Nicky Mayr-Melnhof and René Rast had an unluckier weekend, as after taking third in Race 1, they were forced to retirement in Race 2. The very positive weekend in the Netherlands is the best encouragement as the team heads back to Belgium to finalize preparation for the biggest event of the year, the Total 24 Hours of Spa-Francorchamps in a three week time. 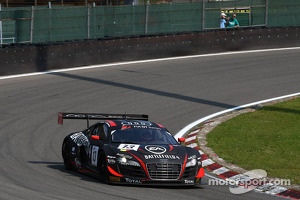 “It was a positive weekend for us, especially towards the championship situation”, summed up Team WRT Principal Vincent Vosse on Sunday afternoon. “It was clear that the Audi was not the most competitive car on track, and that the Mercedes were much faster, but we were able to extract the maximum from what we had in our hands. We really have a superb driver line-up of drivers and a great time, and this showed again over the weekend. I am very proud of the excellent job done by everybody. Our pit crews made it a 1-2-3 in the ranking of fastest pit stops, in both races, and that is something that makes me particularly happy.”

Qualifying wasn’t particularly successful for the Belgian squad: Vanthoor took third but couldn’t do anything against the McLaren of Parente and the Mercedes of Afanasiev, while Rast (5th) suffered from wrong pressure tires and Stippler (8th) admitted that “we lost precious time testing some solutions that did not work as expected.”

The start of the Qualifying race was particularly hot and saw a sensational kick-off of Vanthoor from row 2, who dived into the inside of the Tarzan corner to emerge as the leader. “We were three cars side by side, and I was slightly pushed into the grass of the inside. It was a close one but it went through”, admitted the young Belgian. The other Audis also took an excellent start, with Rast third and Stippler sixth at the end of lap 1. Soon after, the safety-car had to intervene, and after the re-start, Vanthoor’s pace was not the same (“The behavior of the car had changed and we have to understand why”) and Rast took the lead in lap 15. After perfect pit stops for the three cars, Ortelli took the lead from Mayr-Melnhof in lap 22, with Sandström in fourth. The Mercedes in third, though, became more and more threatening. It eventually passed the Austrian three laps to the end and finished in Ortelli’s streamline. A sweaty Stéphane admitted: “It wasn’t easy at all to keep the Mercedes behind in the closing laps, especially on such a demanding circuit, but fortunately we were quite fast in the last corner before the straight and this allowed me to keep the advantage in the straight and the slower corners.” 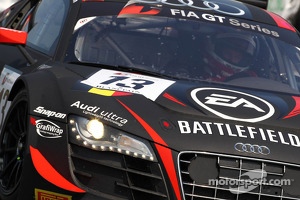 Right after the finish, an unusual incident occurred in the pit lane which could have had serious consequences. While drivers and mechanics of the various teams were greeting each other and waiting for the cars to come back to the victory zone, a car of the race direction going through the pit lane at some speed hit René Rast, running over his right foot. The German driver was immediately brought to the medical center and complained of severe pain on his foot, ankle, ribs and arm but fortunately, nothing was broken and he was cleared for racing on Sunday morning.

The Main race on Sunday also saw a safety-car period in the very initial stages, but that did not change anything to the hierarchy as the Mercedes of Buhk-Day dominated from first to last lap, with Ortelli-Vanthoor and Sandström-Stippler firmly in second and third for the entire race, held in quite warm conditions. For the other Audi Belgian Club Team WRT car, things did not run as smoothly. Nicky Mayr-Melnhof had been running fourth behind his team mates in his stint, but as soon René Rast took the wheel after the pit stop the car stopped. “We don’t know yet what happened exactly, we will have to investigate”, explained Sporting Director Pierre Dieudonné.

The other Belgian Audi Club members present at Zandvoort, Anthony Kumpen and Enzo Ide, had a difficult weekend with the R8 of Phoenix Racing, finishing 12th on Saturday and retiring after 3 laps on Sunday.

The GT community will now focus on the 24 Hours of Spa and the FIA GT Series will resume mid-August with the Slovakia round.

2014: An exceptional harvest for the Belgian Audi Club Team WRT