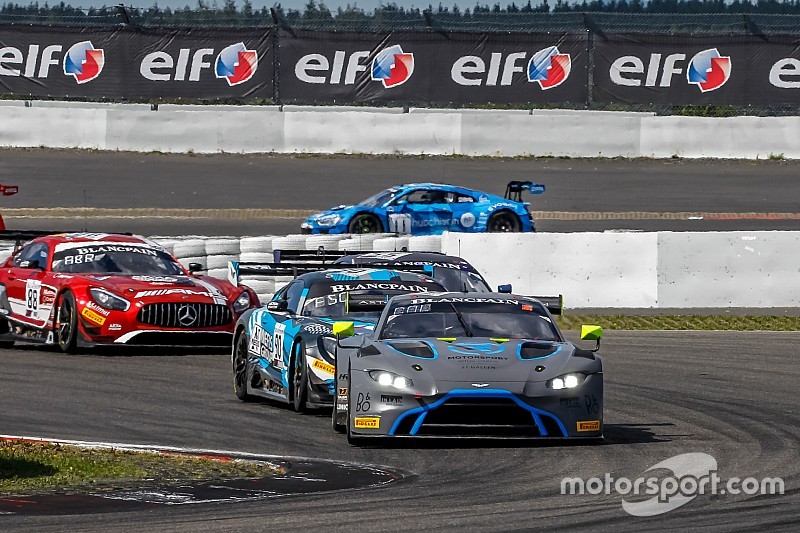 Ricky Collard and Marvin Kirchhofer claimed victory in the second Blancpain GT World Challenge Europe race at the Nurburgring for R-Motorsport as the leading WRT Audi cars took each other out.

Dries Vanthoor had led the majority of the race from pole in the #1 Audi R8 LMS and maintained that place after the mandatory driver-change pit-stop, switching to Ezequiel Perez Companc.

Perez Companc was soon caught by the #2 of Charles Weerts as well as Collard in the #76 Aston Martin Vantage GT3 before clumsily turning in on Weerts under braking for the first corner.

Teammate Kirchhofer qualified the #76 car fifth on the grid but dropped behind the fast-starting #563 Lamborghini Huracan GT3 of Andrea Caldarelli at the start.

Caldarelli brought the #563 car into the pits at the start of the window along with title rival Maro Engel in the #4 Black Falcon Mercedes-AMG GT3.

This allowed the #563 Lamborghini of Marco Mapelli to leapfrog Stolz on exit, dealing a crucial blow to the #4's title challenge.

Jumping both Mapelli and Stolz was Collard, who set a series of subsequent fastest laps to close the gap to the leading Audis.

Before long, Collard was right on the tail of Weerts in the #2, who in turn was closing onto the back of Perez Companc who seemed to be struggling to keep the pace.

Collard got a good run on the back of Weerts coming down the main straight with just over 12 minutes of the race left, forcing the Belgian teenager into a defensive move.

Weerts then dived to the inside of Perez Companc at Turn 1, but Perez Companc turned in on his teammate, forcing both wide and handing Collard the lead.

Both Weerts and Perez Companc suffered damage, with the latter pulling off track after Turn 3 into retirement. Weerts managed to bring the #2 back to the pits, but he too was out.

Collard's route to victory assured, he backed off in the closing stages and made sure of the win ahead of the Sainteloc Audi of Simon Gachet and Christopher Haase the Lamborghini shared by Mapelli and Caldarelli.

Stolz limited the damage with fourth overall ahead of the Tech 1 Racing Lexus of Jack Hawksworth and Aurelien Panis in fifth.

Rik Breukers and Oscar Tunjo took Silver Cup honours with an impressive sixth overall in the WRT Audi, while the Ferrari of Andrea Bertolini and Louis Machiels fended off a spirited attack from the  Lamborghini of Phil Keen and Hiroshi Hamaguchi in the Pro-Am category.

Florian Scholze and Wolfgang Triller took Am victory for HB Racing Ferrari, a full two laps ahead of Rory Penttinen and Stephen Earle.