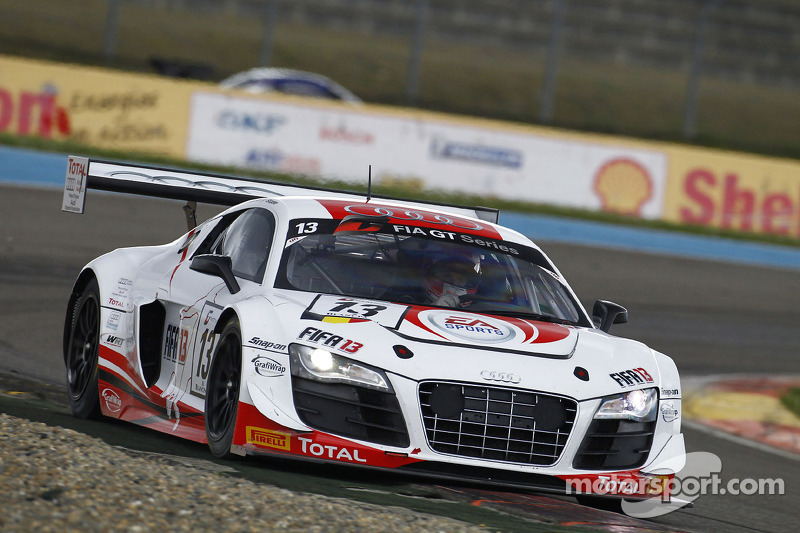 The Belgian Audi Club Team WRT squad is sure to come under rapid fire from their Nogaro adversaries, Sebastien Loeb Racing once more.

The FIA GT Series moves on to Zolder this weekend for the second round of the new-look series, just three weeks after a thrilling opening race at Nogaro in France wowed the crowds.

Another quality and diverse field of spectacular GT cars will assemble at the Belgian track, which celebrates its 50th birthday in 2013.

A host of home teams and drivers will be pumped-up for action next weekend as the large Belgian contingent will be intent on giving the enthusiastic and knowledgeable crowd something to cheer.

Winners from Nogaro – Belgian Audi Club Team WRT, will again have a trio of Audi R8 LMS Ultras to form an imposing attack, starting with winners of the first race, Edward Sandström and Frank Stippler in the #13 Audi R8 LMS ultra, who fought from the back of the grid to a sensational win.

The team also has local hero, Laurens Vanthoor as one of its drivers in the #11 entry which he shares with Stephane Ortelli. Both will be keen to take strength from Vanthoor’s Nogaro heroics when he pulled off some memorable overtaking moves in the closing stages. 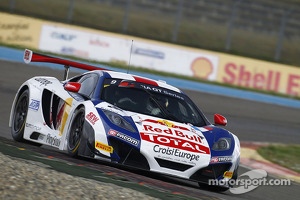 However, the Belgian Audi Club Team WRT squad is sure to come under rapid fire from their Nogaro adversaries, Sebastien Loeb Racing once more.

The two teams raced ferociously at Nogaro for the victory, with the fight only resolved by contact between Alvaro Parente and Rene Rast and then also by a subsequent penalty for the McLaren MP4-12C as the battle looked set to re-ignite. Sebastien Loeb was the toast of France last month when he and team mate Alvaro Parente took the Qualifying Race spoils.

The nine-time World Rally Champion, and one of the most famous faces in global motorsport, much enjoyed his first FIA GT Series race but will be keen to gain some revenge in the Main Race at Zolder on Sunday.

In the sister McLaren MP4-12C, Mike Parisy will be aiming to re-create some 2012 magic at Zolder, where he scored a memorable win. He is joined again by Austria’s, Andreas Zuber.

A Zolder fan favourite is sure to be the Phoenix Racing Audi R8 LMS Ultra of Belgian duo Anthony Kumpen and Enzo Ide. The Phoenix team has high hopes for Zolder after a fine 4th place last time out.

The well-drilled Phoenix team can count on themselves to give their drivers the best possible opportunity, as they scooped the FIA GT Series pit-stop challenge laurels at Nogaro to set a scintillating standard in the pits for the season to come.

Joining the PRO Cup fight this weekend will be the Lamborghini Blancpain Reiter entered car for Peter Kox and Stefan Rosina. The team joins the series from round two onward with their spectacularly liveried and newly developed Lamborghini Gallardo GT3 FL II.

A new team that emerged from the first race as potential challengers for podiums and wins this season include the BMW Sports Team Brasil cars.

The Antonio Hermann led South American representatives had a solid debut, scoring points and laying down some useful foundations for the season ahead with their stellar driver line up of ‘Caca’ Bueno, Ricardo Zonta, Allam Khodair and Sergio Jimenez.

Re-enforcing the truly International flavour of the FIA GT Series are BMW Sports Trophy Team India with Armaan Ebrahim from India partnering Frenchman, Julien Jousse in a patriotically liveried BMW Z4 that will compete in PRO-AM.

Karun Chandhock makes it two Indian drivers in the series as he partners in the German - Seyffarth Motorsport team alongside Jan Seyffarth. Both drivers showed flashes of real pace and promise during the first race weekend.

In the PRO-AM class the battle for supremacy is just as competitive with the Novadriver Audi R8 LMS of Cesar Campanico and Carlos Vieira leading the way after a brilliant combined performance in France.

More PRO-AM Portuguese ‘men o’ war’ arrive in Belgium via Rodrive Competicioes and their talented Brazilian pairing of Matheus Stumpf and Claudio Ricci. The pair looked to be a podium threat at Nogaro on occasions and the Ford GT could spring more surprises at Zolder this weekend.

Nissan GT Academy Team RJN claimed a podium position with Alex Buncombe and Lucas Ordonez at Nogaro in the main race and head to Zolder intent on claiming more big points to add to their tally.

The vibrant team once again run a second Nissan GT-R NISMO GT3 for the sensational ‘gamers to racers’ that are Wolfgang Reip and Mark Schulzitskiy.

Both continue to turn their racing dreams in to reality with Nisssan and their headline grabbing GT Academy programme. It is a big weekend for Reip, as he races at home for the first time in International competition.

The Gentlemen Trophy will be a straight fight between a Mercedes of HTP Gravity Charouz and the second Ford GT entered by Rodrive.

Petr Charouz and Jan Stovicek have a ten point advantage over the all-Brazilian pairing of Felipe Tozzo and Raijan Mascarello going in to Zolder and all indications suggest a tight battle between these two cars all season long.

Stephane Ratel – Founder and CEO of SRO Motorsports Group: “What a way to start the season at Nogaro. Fantastic fights for the lead between many cars and drivers; the remarkable story of Sebastien Loeb and the McLaren v Audi battle all weekend.

Everyone expects more of the same at Zolder next weekend with many teams and brands joining the fight throughout the classes to put on another unforgettable show.

We also have the added spice of Belgian teams and drivers fighting for honour at their home track. It promises to be a mouth-watering occasion and one very befitting of the Zolder circuit’s 50th anniversary celebrations.”

Anthony Kumpen – Phoenix Racing Audi R8 LMS Ultra: “For me it is very special to race at Zolder, I won the 24 hours of Zolder six-times, it is my home track, and the track where I did my first steps in racing, my first laps in a race car. It is really exciting to be here for this race.

A lot of people, sponsors and friends are going to come there so I think there is going to be a huge crowd. It is a track where we have a lot of experience, we know the car a lot better, so the goal is to be on the podium and to take important points for the championship. I am really looking forward to this weekend.

Ricardo Zonta – BMW Sports Trophy Team Brasil BMW Z4: “Zolder is a track that I already know as I raced there in 2011. It’s a very difficult circuit, narrow and with just a few overtaking opportunities.

But even so, I think our car will adapt itself quickly at this track due to low speed turns, which are more favorable to the BMW Z4.

“Now, we don´t have the tension of being new boys! In the first round, Sergio (Jimenez) and I took more time in adapting, because we didn’t know the car, and we had not run enough, due to the rain.

I'm excited for this second round, because we already have the knowledge of the equipment, we know that is a more favorable track for the car and we know the driving style of each other, which is practically the same.”

So the speed is definitely there, hopefully we will also be competitive in Zolder as well! As we saw there last year the Audi seems to like the Nogaro track so let’s hope that we can fight for a podium in Belgium too.”

Matheus Stumpf – Rodrive Competicioes Ford GT: “Nogaro was a great experience for me racing against good teams and good drivers, and we got good results, with our 3rd and 6th place in the races. Looking ahead to Zolder, I’m very excited to drive at this legendary circuit.

I have never been there before and the circuit has some turns there that might not be so good for our Ford GT, but we are happy to have a competitive car and we will try to get the right setup for the car to bother the leaders of the championship.”

Wolfgang Riep – Nissan GT Academy Team RJN Nissan GT-R Nismo GT3: “I live just 60 kilometres from the track and I've been there hundreds times as a spectator, I know everything there and my driving style should suit the track.

I am quite confident and it will be our third race together so we now will know the Nissan GT-R NISMO GT3 better and will be even faster. A podium in the PRO-AM class is definitely achievable.”