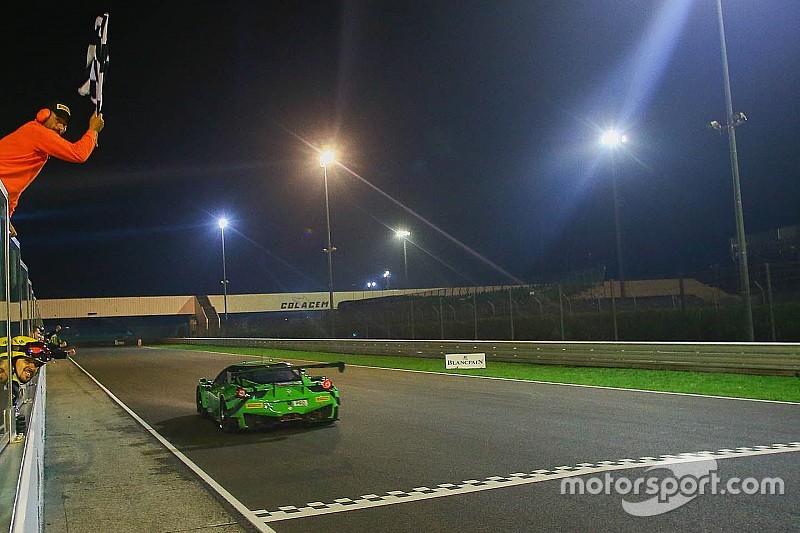 Having had to start from the pitlane due to a post-qualifying engine change, Vanthoor fought his way up to 13th and got a run on the Bentley of Jules Szymkowiak out of Turn 6 when the Dutchman ran wide.

Vanthoor tried to squeeze past Szymkowiak on the left and edged ahead, but then moved over on the Bentley and got turned into the barrier at full speed.

The Belgian emerged from the car shortly after the hit but couldn't walk on his own and had to get help from the marshals.

The green flag stretch had lasted for 12 minutes prior to that, with Siedler narrowly leading the AEM Nissan of Craig Dolby. The subsequent safety car period was also 12 minutes long and, as the race restarted, the pit window for the driver change opened.

Dolby pitted a lap before Siedler, looking to get the undercut on the Rinaldi Ferrari, but the Nissan endured a painfully slow left-tyre change during the stop and dropped out of contention.

Meanwhile, Siedler encountered no issues during their stop and his teammate Seefried joined the track in the lead.

However, he'd quickly come under pressure from Patrick Kujala, who had taken over from Mirko Bortolotti in the Grasser Lamborghini #63.

Maximilian Buhk, teammate of Vincent Abril in the HTP #84 Bentley, then closed in on Kujala, giving Seefried breathing room and allowing him to storm to victory.

And Kujala would get to settle for second as the Buhk/Abril squad received a drive-through for a pit stop infringement, their car having gotten going before the crew members were behind the white line.

As such, the #2 Audi of Enzo Ide and Christopher Mies was promoted to the podium, with the Valdeno Brito / Atila Abreu BMW, the Stephane Richelmi / Stephane Ortelli Audi and the Caca Bueno / Sergio Jimenez BMW making up the points-scoring top six.