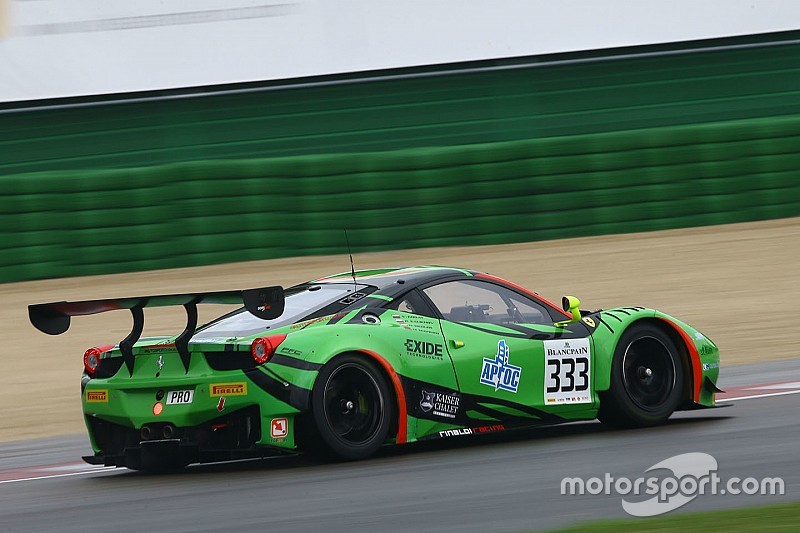 Rinaldi Racing Ferrari duo Norbert Siedler and Marco Seefried completed their sweep of the Misano Blancpain Sprint Series round with a straightforward victory in the Championship Race.

The #333 Ferrari 458 started from pole in the hands of Seefried courtesy of the duo's Qualifying Race win on Saturday evening, but were beaten to the first corner by Patrick Kujala's #63 Lamborghini Huracan.

By the time Siedler took over at mid-distance, the #333 had a seven-second margin over Vincent Abril in the #84 HTP Bentley Continental, Abril's teammate Maximilian Buhk moving into second ahead of Kujala halfway through the opening stint.

From there, it was plain sailing for Siedler, who held on to take the chequered flag and seal he and Seefried's first victory in a Championship Race this season.

Behind, Abril brought the #84 Bentley home safely in second ahead of erstwhile Formula 2 champion Mirko Bortolotti, taking over from Kujala in the Grasser-run Lamborghini.

An entertaining duel for fourth was resolved in favour of the #77 BMW Z4 of Valdeno Brito and Atila Abreu. Craig Dolby, sharing the #173 Nissan GT-R with Sean Walkinshaw, hassled Brito for the final five minutes, edging ahead of two occasions but running wide both times.

With points leaders Robin Frijns and Laurens Vanthoor not starting after their Audi R8 was destroyed in a heavy crash during the Qualifying Race, Buhk and Abril head to the Zandvoort finale just eight points behind. Siedler and Seefried are 17 points adrift with 34 left to play for.

Ferrari wins in Italy, title race goes down to the wire