Mercedes held the advantage in a torrid battle of the brands but BMW are poised to pounce after the first day of the sixth round of the FIA GT1 World Championship in Slovakia. 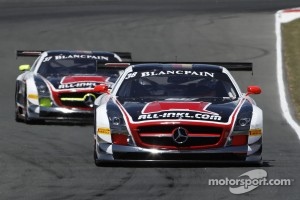 Glorious sunshine in the morning gave way to overcast skies in the afternoon as the teams worked on set-up throughout the day ahead of tomorrow morning’s Qualifying.

The competition was incredibly close with just four tenths of a second separating the top seven in the morning. There was a similar trend in the afternoon.

Basseng and Winkelhock finished third in the Championship Race when the series visited the Slovakia Ring in June, and Basseng was pleased to have the Mercedes near the sharp end on a Friday.

“This is a new situation for us to be so high in Free Practice, normally we seem to be a little off the pace in these sessions. We decided to go a different way on set-up to focus more on Qualifying and we found some performance,” Basseng said.

“I hope it turns out to be the right way by the end of the weekend. Position one and four for our cars in the afternoon session is a really good result.

“You can see that the competition is much stronger because we are coming to the same race track for a second time.

“This weekend, the tiny things will make a difference – pit entry, pit stop, pit exit and even how quick you are on cold tyres. It will be very interesting racing for sure.”

The Vita4One BMWs were second and third fastest overall – Mathias Lauda (DEU) and Nikolaus Mayr-Melnhof in the No.17 producing a 2:01.733 to edge out the sister Z4 of Michael Bartels (DEU) and Yelmer Buurman (NLD) with 2:01.969.

Bartels and Buurman were the winners of the Championship Race when the series paid a visit to the Slovakia Ring in June.

Vita4One Racing team boss Bartels agrees that fractional gains will be the key. “It’s very, very close if you take into account that it is a two-minute lap and the first seven cars are so close together that we can expect a very close race.

“We have hit the window of performance with both cars but we need to find every little thousands of a second. Maybe the pit stops will be the difference in the end.

“It means a long night with pit stop practice and a lot of analysis. We are competitive but it’s tough. It’s the closest racing so far. Mathias (Lauda) and Niki (Mayr-Melnhof) are showing us at the moment that the car can go even faster so we have to catch up a little bit on our car.

“The aim this weekend, as always, is to get a strong result for both cars for the teams’ championship.”

Austria’s Andreas Zuber returned to the FIA GT1 World Championship, this time at the wheel of the Sunred Ford GT No.10 alongside Serbian Milos Pavlovic. The pair were as high as fifth in the afternoon with a 2:02.00.

In June, the Ford GT Qualified third and Zuber has high hopes of a points’ finish this weekend. “This is a different experience for me again because it was my first time in the Ford GT. I started the year in the Aston then in the Porsche now the Ford,” he said.

“The car is by far the stiffest GT car I’ve ever driven, it’s fun to drive but difficult to drive quick. The car is very sensitive and if you lose the rear that’s it, it’s very hard to catch again, it’s actually the closest GT car to a formula single-seater I’ve driven so that’s nice but as I say hard to push.”

“Last time the car was quick here so we should be OK. The car is very consistent on tyres. My aim this weekend is to help the team to score the first points for Ford.”

Local hero Stefan Rosina who shares the No.24 Reiter Lamborghini with Albert von Thurn und Taxis (DEU) is delighted to be back on home soil.

“For Slovakia, having a second world championship round is quite unique. Plenty of my friends will come this weekend so I hope we can do a good job for them,” he said.

“We are not at the pace as we would like to be. We have some work ahead overnight to aim to be in Q3 tomorrow.”

Stephane Ortelli (MON) and Laurens Vanthoor (BEL) in the No.32 R8 LMS were the best of the Audis with a morning lap of 2:02.080 while Toni Vilander (FIN) and Filip Salaquarda (CZE), the pole-sitters in June, led the charge for Ferrari with a 2:02.249 to be inside the top eight.

It was a troublesome day for Hexis Racing McLaren. The No.1 of Frederic Makowiecki (FRA) and Stef Dusseldorp (NLD), who were second in the Championship Race last time out, were plagued with suspension issues for most of the day.

They were down the pecking order with a best time of 2:04.317 set in the afternoon. The sister car of Alvaro Parente (PRT) and Gregoire Demoustier (FRA) was also propping up the time sheets having been similarly affected.

Team manager Philippe Dumas said: “We are not entirely what has happened with the car, we’ve had a few improvements put on the car from McLaren GT but we’re now investigating into what has happened here in practice.

“We decided not to continue doing many laps in practice because we have this big trouble with the car. It’s not a mechanical problem but something is wrong on both cars so we didn’t want to continue for nothing and waste tyres.

“We did have some problems last time we were here but the car turned out to be quite competitive anyway.”

Tomorrow’s Qualifying starts at 10:15 local time with the Qualifying Race timed for 17:45.

Battle shifts to the Slovakia Ring for round six