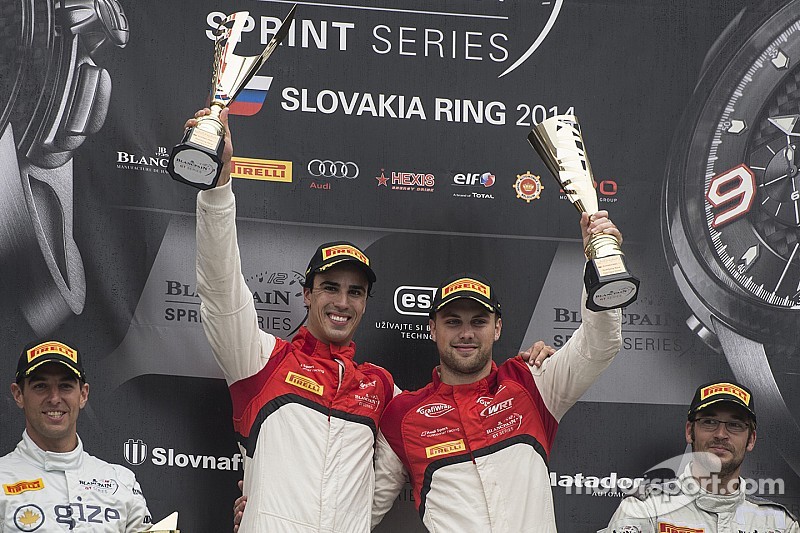 The #1 Belgian Audi Club Team WRT Audi of Laurens Vanthoor and Cesar Ramos will start from pole position in tomorrow’s Main Race of the Blancpain Sprint Series event at the Slovakiaring. The Belgo-Brazilian pairing won what turned out to be a very eventful Qualifying Race, a race which was red flagged twice. Second went to the #28 Grasser Racing Team Lamborghini of Bleekemolen and Proczyk, while Series’ leader Maximilian Götz and his Belgian team-mate Nico Verdonck completed the podium. The Silver Cup laurels were conquered by the Italian BMW-pairing of Colombo and Fumanelli, while Phoenix Racing drivers Marc Basseng and Alessandro Latif proved to be the best in the Pro-Am Trophy.

The drama at the Slovakiaring started shortly after the lights went green. In the hustle of the opening lap Tomas Enge lost control of his #88 Reiter Engineering Lamborghini, hitting the barriers hard and rolling the car several times. The Czech driver was unharmed, but the barriers needed to be repaired so the race had to be interrupted.

While the cars were standing on the grid, it started raining hard. After the restart René Rast in the #2 Belgian Audi Club Team WRT Audi quickly took the lead away from the #28 Grasser Racing Team Lamborghini of Jeroen Bleekemolen, while polesitter Laurens Vanthoor was trying to take third away from Markus Winkelhock in the #5 Phoenix Racing Audi.

Shortly before the pit window opened, the rain increased in intensity, causing several drivers to spin. A short Safety Car intervention followed, after which the rain was red flagged again, with 28 minutes to go. Neither the #6 Phoenix nor the #27 Grasser car had made their stops, meaning they had to come in after the race had started again, dropping them down the order.

Enzo Ide had taken over from René Rast and despite being under pressure all the time – first from Hari Proczyk in the #28 Lamborghini, then from Cesar Ramos in the #1 Audi – the Belgian looked like he was heading for a second consecutive win. Five minutes from the end Ide lost control of his car however, spinning the Audi and dropping to ninth overall.

Cesar Ramos took advantage of Ide’s mistake to claim the #1 Audi’s first win of the year. Behind him Series’ newcomer Nico Verdonck was all over the back of Proczyk’s Lamborghini, but the driver of the #84 HTP Motorsport Mercedes could not find his way past and had to settle for third.

Vincent Abril in the #4 Belgian Audi Club Team WRT Audi was also part of the exciting battle for second having carved his way through the field in the final fifteen minutes of the race. Unfortunately for him, the leader in the Silver Cup made a small, but costly mistake in the final lap, running wide a couple of corners from the end. Not only did Abril drop from 4th to 6th overall, but he also lost the win in the Silver Cup, which was claimed by the Italian duo of Stefano Colombo and David Fumanelli, at the wheel of the #34 ROAL Motorsport BMW.

In Pro-Am Trophy Stefan Landmann dominated the opening half of the race with the #27 Grasser Racing Team Lamborghini, but after the driver change there was no stopping Marc Basseng in the #5 Phoenix Racing Audi. The German even managed to close in on the overall leaders and finished in 8th overall.

Cesar Ramos (#1 Belgian Audi Club Team WRT Audi): "This was a very long and very hard race. When I took the wheel of the car for the second half of the race, I did not know what to expect on the wet track. Fortunately Laurens could give me some pointers over the radio, so I managed to overtake the Lamborghini and then put pressure on Enzo. I am very happy with this first win of the season.”

Jeroen Bleekemolen (#28 Grasser Racing Team Lamborghini): "I have never, ever seen such conditions as the ones we had today. I felt like I was driving like my grandmother, because in the rain, cars were passing me left and right. But soon afterwards I saw them all – every single one of them – going off. Hari did a great job in the final part of the race. We lacked some speed, but he still managed to defend his second position.”

Nico Verdonck (#84 HTP Motorsport Mercedes): "First of all, I am happy to be here. The pitstop was very good, the team did an excellent job, and Maxi did a first great stint. We lost two positions after the safety car intervention. Afterwards, we struggled a bit in the corners. It was difficult to overtake the other cars and I wanted to take the points for the team. We will see tomorrow what we can do, but it will be hard if it remains dry.”