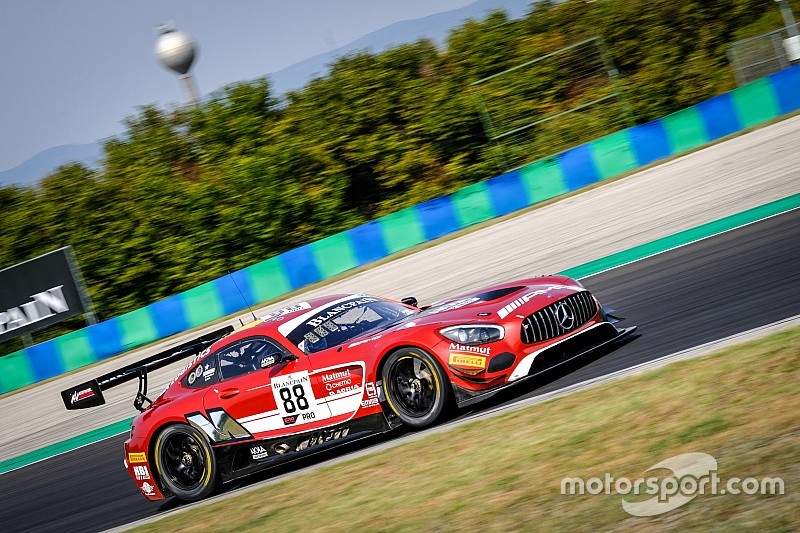 ASP Mercedes duo Raffaele Marciello and Vincent Abril took victory in the opening race of the Blancpain GT World Challenge Europe season finale at the Hungaroring, as the title race tightened up.

Marciello and Abril led from start to finish in their #88 Mercedes-AMG GT3 on a wet track, but Black Falcon Mercedes pair Luca Stolz and Maro Engel boosted their title chances by finishing second after a final-lap pass by Engel on Christian Engelhart's Lamborghini.

Stolz and Engel trailed Marco Mapelli and Andrea Caldarelli by eight points heading into the race, but the gap between the two leading crews in the standings is now just two points ahead of Sunday's finale after FFF Racing Lamborghini duo Caldarelli and Mapelli finished fifth.

The opening three laps of the race were held behnd the safety car, but once the race got going in earnest, Stolz held second behind fellow Mercedes driver Marciello and ahead of Mirko Bortolotti in the Grasser Racing Lamborghini Huracan GT3.

Shortly before the mid-race driver swaps, Bortolotti passed Stolz for second, but once Engel had taken over the Black Falcon car he started to close on Engelhart - taking over the #63 Lambo from Bortolotti - by a second a lap.

While Abril brought home the #88 Mercedes for a second win of the season, Engel tried to line up Engelhart for a pass at Turn 1 in the final few laps, only to be rebuffed each time.

But Engel managed to finally find a way past on the last tour with an improbable round-the-outside move at the Turn 8/9 complex to grab an extra 2.5 points.

Mapelli appeared to struggle in the early stages and was among the first to pit to hand over the #563 Lambo to Caldarelli, who was then able to pass Hugo de Sadeleer's R-Motorsport Aston Martin Vantage GT3 for fifth.

The Aston shared by de Sadeleer and Aaro Vainio was beaten to Silver Cup honours in the end by the ASP Mercedes of Nico Bastian and Thomas Neubauer.