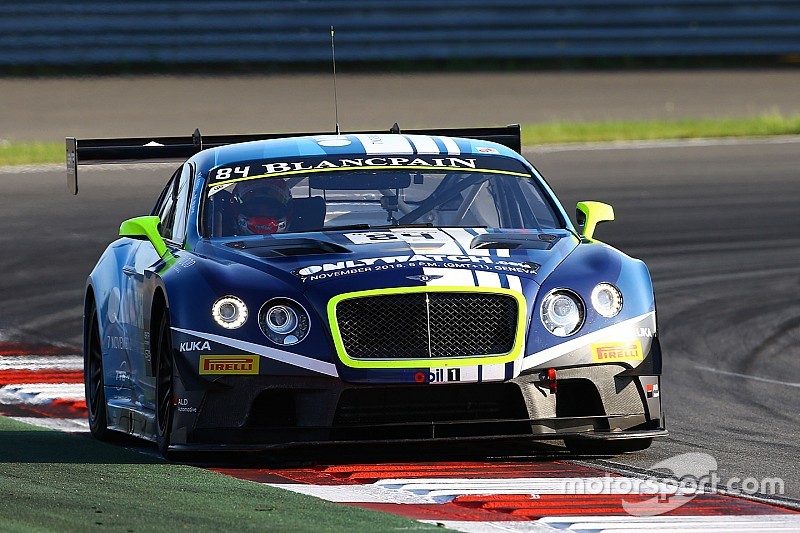 Atila Abreu crossed the line in second, less than a second in front of Marco Seefried.

The drivers of the #84 Bentley Team HTP car Vincent Abril and Maxi Buhk dominated the main race of the Moscow round of the 2015 Blancpain Sprint Series. The Frenchman took the lead at the start, jumping from third to first, and never looked back. Former Blancpain Endurance Series-champion Maxi Buhk had little trouble holding on to the lead and claimed the team's first win with a Bentley.

The fight for second looked to be decided in the pitlane, when Markus Winkelhock jumped both the #77 BMW Sports Trophy Team Brasil car and the #333 Rinaldi Racing Ferrari. But the #6 Phoenix Racing Audi was penalised with a drive-through after an unsafe release, which meant that Atila Abreu crossed the line in second, less than a second in front of Marco Seefried.Silver Cup was won by the #83 Bentley Team HTP of rookie Max Van Splunteren and Jules Szymkowiak, while the #70 GT Russian Team Mercedes of Christophe Bouchut and Alexey Karachev took top spot in Pro-Am.

First win on the Qualifying Race

The Qualifying Race saw an emotional first win for Nick Catsburg and Albert von Thurn und Taxis in the #88 Reiter Engineering Lamborghini, but in the main race the joy of the Austrian was short-lived. Contact was made at the start between the Lamborghini, the #0 BMW Sports Trophy Team Brasil car and the #2 Belgian Audi Club Team WRT R8 and the Gallardo was spun round. It was the end of the race for Von Thurn and Taxis.

Meanwhile, Vincent Abril set a blistering start with the #84 Bentley Team HTP Continental and managed to steer clear of the mayhem behind him. The Frenchman quickly built up a lead of a couple of seconds, first on the #77 BMW Sports Trophy Team Z4 (which had started from seventh), then on the #333 Rinaldi Racing Ferrari, which had lost some ground in avoiding the first corner incidents.

The pitstop of the Bentley was less than perfect, but Norbert Siedler lost some time in the Ferrari pitstop as well. That meant that the Rinaldi Racing machine dropped to fourth, behind the #77 BMW and the surprising #6 Phoenix Audi. Markus Winkelhock was racing alone in Moscow, since team-mate Niki Mayr-Melnhof had to leave the circuit for personal reasons. Even though Winkelhock could not score any points, he still wanted a podium finish. That proved to be impossible, since he was penalised for an unsafe release for the Phoenix Audi. A drive-through for Winkelhock meant that he dropped to sixth.

The Bentley was fantastic, the team did excellent work and Maxi finished the job.

In front Maximilian Buhk had everything under control and the German ended the 36-lap race with over seven seconds in hand, scoring the first win of the season and the first win of the team since it switched to Bentley at the beginning of this season. With this win Buhk and Abril are now second in the Blancpain Sprint Series driver standings, 15 points behind the leaders.

Marco Seefried did all he could to recover second position, but Atila Abreu managed to hold on to the runner-up spot and claimed the team's fourth consecutive podium finish, closing the gap towards Blancpain Sprint Series leaders Laurens Vanthoor and Robin Frijns to 19 points. The Belgian-Dutch duo, setting perfect scores during the previous two meetings, did not have the best of weekends. During the qualifying race Vanthoor had a puncture on the opening lap, which meant that the #1 Belgian Audi Club Team WRT had to start the race from the penultimate row.

Robin Frijns quickly gained some ground, driving from 16th to 6th, giving Vanthoor the opportunity to fight for a podium position. But just when the Belgian had closed the gap towards the #333 Rinaldi Ferrari, Vanthoor spun and lost a position in favour of the #2 Belgian Audi Club Team WRT machine of Stephane Ortelli. Vanthoor eventually finished in fifth, adding another ten points to their tally.

For Jules Szymkowiak and Max Van Splunteren, the Moscow weekend proved to be very interesting. The latter made his debut in the Series and at the wheel of the Bentley, the 19-year old proved to be competitive right away. Small mistakes meant that the Dutch duo did not end up as high as expected in the overall rankings, but the Silver Cup cheque was still theirs.

In Pro-Am Cup each car had one Russian driver at the wheel, making the category very interesting for the Moscow fans. The #70 GT Russian Team Mercedes barely made it to the start of qualifying after a crash during free practice, but the bright yellow machine of Christophe Bouchut and Alexey Karachev was not only repaired in time, the French-Russian duo also took a much coveted win in front of the team's home crowd.

Vincent Abril (#84 Bentley Team HTP Continental): "At the start I followed the Lamborghini, but then Albert suddenly slowed down and I managed to overtake him. I quickly had a good gap to the cars behind, so I could fully focus on my driving. I did not look in the mirror once. The Bentley was fantastic, the team did excellent work and Maxi finished the job. I am so happy with this first win."

Valdeno Brito (#77 BMW Sports Trophy Team Brasil Z4): "During practice and qualifying we did not have a good car and we only managed to qualify in 15th. But overnight the team did an excellent job in changing the set-up of the car and it immediately proved to be very competitive. We climbed up to 7th for the grid of the main race and in the start I could pass the other cars to take second. This is our third podium in a row and I know we can still improve. We really want that win."

Norbert Siedler (#333 Rinaldi Racing Ferrari): "It proved very difficult to overtake the BMW. At the end of the straight I always was just a couple of metres short to outbrake Atila. But this was still a good weekend for us. Second in the qualifying race, third in the main race, I think a win is certainly possible in the near future."

Max Van Splunteren (#83 Bentley Team HTP Continental): "This is a really cool championship, very competitive as well. I have to thank Bentley and HTP for this opportunity. As a young driver you really can learn a lot from the more experienced drivers. My start was good, but afterwards I was passed by a couple of Audi's. Still, it was an ok stint in my eyes, I really had a good time with the Bentley."

Alexey Karachev (#70 GT Russian Team Mercedes): "This was an unbelievable weekend, certainly after the crash on Friday. Overnight I took a plane to the Czech Republic to get the necessary parts to repair our car, so I hardly slept. The team did a fantastic job to get the car ready in time for qualifying, even though we were not able to test it before taking it to the track. During the races we were able to fight with the other cars, I managed to almost match the lap times of my Pro team-mate Christophe Bouchut, and we won Pro-Am! So yes, I am a very happy man."