Ferrari wins in Italy, title race goes down to the wire 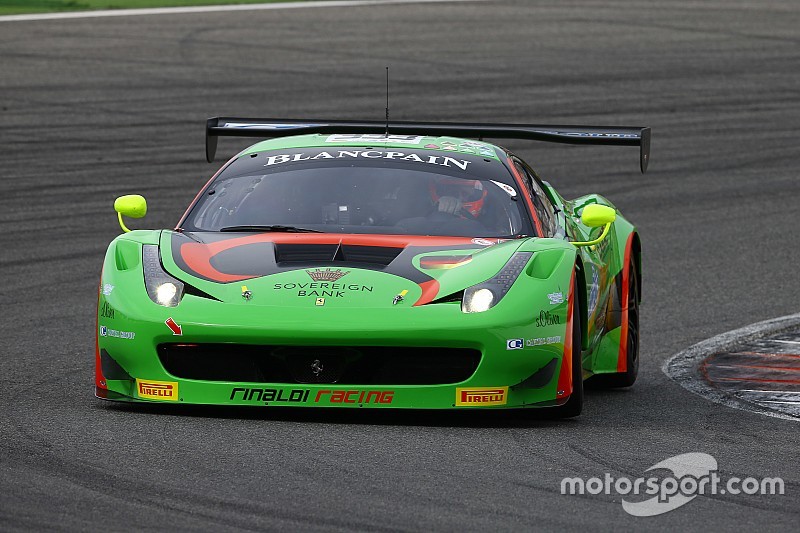 The Bentley Boys have reduced the gap to leaders Vanthoor and Frijns to eight points.

Norbert Siedler and Marco Seefried and their #333 Rinaldi Racing Ferrari had a perfect race weekend during the Misano round of the 2015 Blancpain Sprint Series, taking pole position and the win in both the qualifying and main races. The green Ferrari crossed the line with seven seconds in hand over the #84 HTP Bentley of Maxi Buhk and Vincent Abril. In the driver standings the Bentley Boys have reduced the gap to leaders Vanthoor and Frijns to eight points.

Third in Misano went to the #63 Grasser Lamborghini of Bortolotti and Kujala, in the drivers' first ever-race in the Blancpain Sprint Series. Pro-Am Cup was won by the GT Russian duo of Asmer-Vasilyev, while the Fjordbach twins in the #74 ISR Audi took honours in the Silver Cup.

With two prestigious Italian car manufacturers on the front row, the start for the Blancpain Sprint Series Main Race in Misano was sure to get the Italian race fans excited. But when the lights went out, Atila Abreu in the #77 AH Competicoes Team Brazil BMW almost spoilt their party by squeezing his car in between the Ferrari of Marco Seefried and the Lamborghini of Patrick Kujala. However, coming out of the first corner it was the Finnish youngster who led the pack, recording the first lap in the lead of a sprint race for the Lamborghini Huracan.

I have to admit I did not know that trying to overtake the Lamborghini would work out.

His joy was not to last long, for a couple of laps later Seefried produced a magnificent overtaking manoeuvre, retaking the lead. The Ferrari driver quickly ran away from Kujala, who now was under pressure from Maxi Buhk in the #84 HTP Bentley. Buhk, who had started from seventh, was soon up to fourth and by passing the BMW of Abreu after only a couple of laps moved up to third. Just before the pitstop window opened, Buhk took second away from Kujala as well.

The driver change in the Lamborghini camp was not the best ever, dropping the #63 car one more place down the order. With new tyres, Mirko Bortolotti managed to climb back to third, but that is as high as he could get. In front, Norbert Siedler kept on pushing at the wheel of the #333 Ferrari, increasing his lead to over ten seconds at a point. In the end that was more than enough to hold the first position until the finish, ending the weekend with a perfect score.

By finishing second, Vincent Abril and Maxi Buhk reduced the gap to series leaders Laurens Vanthoor and Robin Frijns - non-starters after yesterday's crash - to eight points. Norbert Siedler is still in the running for the drivers title as well, 17 points behind the leaders. While Vanthoor is suffering from a sprained foot and will have some anxious days before he can make a decision on the subject of driving in Zandvoort, Siedler is already sure he will have to look for a new team-mate, with Marco Seefried unable to attend the season finale.

Behind the podium finishers Valdeno Brito in the #77 Team Brasil BMW and Craig Dolby in the #173 Always Evolving Nissan had a most entertaining scrap for fourth, with the Brazilian eventually holding on to his position. That was not enough to keep the Brazilian squad in the running for the teams' title in the Blancpain Sprint Series however, since Ortelli and Richelmi's seventh was enough for the Belgian Audi Club Team WRT to secure the 2015 Blancpain Sprint Series Teams’ title.

In Pro-Am Cup Alexey Karachev claimed the drivers' title, even though the Russian saw today's race win go to his GT Russian team-mates Asmer and Vasilyev. In the Silver Cup the #74 ISR Audi of the Fjordbach brothers was the only car to take the start of the race, with the #83 HTP Bentley of Szymkowiak-Van Splunteren too badly damaged after yesterday's qualifying race and the #19 Grasser Lamborghini of Mul-Di Folco unable to get onto the grid due to mechanical gremlins. Through these results the Fjordbach twins are now back in the running for the Silver Cup title, travelling to Zandvoort with a 16-point deficit on leader Jules Szymkowiak.

Marco Seefried (#333 Rinaldi Racing Ferrari): "I have to admit I did not know that trying to overtake the Lamborghini would work out. He had a little slide coming out of turn 11 and I could catch up. He realised I was there and closed the inside, so there was only one way left around him. I knew I would not get so many chances to do a move, so I took the chance and it worked out."

Norbert Siedler (#333 Rinaldi Racing Ferrari): "We are very happy with this win, the team did a perfect job and now we are still in the running for the title. Unfortunately Marco cannot make it to Zandvoort to fight with me for the title. We will try to find another driver to help me make the most of it, but it will not be easy for sure."

Maxi Buhk (#84 Bentley Team HTP Continental): "It was a pretty good start and a good first lap, followed by a good fight with the Lambo. I was waiting for a mistake, since I was not in a position to be too aggressive, because that could have cost us some points. I had to be patient. When we overtook him, I tried to pull clear before the pitstop, which I did. Unfortunately, we lost some time with the door of the car during the driver change, but the end result was really good."

Mirko Bortolotti (#63 Grasser Racing Lamborghini): "As soon as I was out on track after the pitstop, there was only one strategy: push like hell. When I had passed the BMW I tried to close the gap on the Bentley, but it was running at about the same pace as me. Maybe I was a little bit faster, but enough to make a move. I think this third place is the absolute maximum that we could get, so I am very happy with what we did this weekend."

Marko Asmer (#71 GT Russian Team): "First of all I would like to thank the team to get both cars ready for today, after a slight mistake caused damage to both of them in yesterday's qualifying race. They boys did not sleep all night, so thank you for that. The race itself was pretty fun, as it always is. I really enjoyed it."