Circuit Zolder next up for premier GT series

The FIA GT1 World Championship travels to Belgium for the second round of the 2012 season at Circuit Zolder which played host to a brilliant event in 2011.

Just like last year, for 2012, the Zolder race organisers will add a splash and dash of fashion in collaboration with notable Belgian designer Nicky Vankets as part of a race weekend themed ‘Glitter, Glamour and GT power’.

For local fans, the pair of Audis under the Belgian Audi Club Team WRT banner, will catch the eye just as they did at the opening round in Nogaro, France two weeks’ ago. A dominant performance saw the highly-polished outfit complete a dominant Easter weekend. They loom as the team to beat on home soil.

Twenty-year-old local hero Laurens Vanthoor, in partnership with Stephane Ortelli (MON) won both the Qualifying and Championship Races in the No.32 Audi R8 LMS. “I am really pleased to be driving with Stephane. We will hope to be consistent in Zolder. It would be great to score a victory in front of the Belgian crowd,” Hasselt-born Vanthoor said.

The sister car, the No.33 of former DTM driver Frank Stippler (DEU) and Briton Oliver Jarvis was second in both races as Vincent Vosse’s team took maximum points. Jarvis expects stronger opposition from the rest of the pack in Zolder. 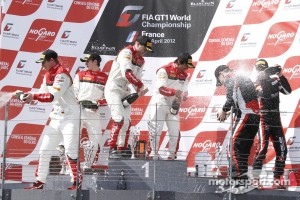 He said: “The WRT team celebrated 1-2 victories in both the qualifying session and the main race with the new Audi R8 LMS ultra. This was the perfect start to the season. In the second race, Frank Stippler and I were even leading for a while, but we had a little difficulty with getting the front tyres up to the right temperature. I think we will have to expect some very strong competitors in the course of the year. Due to individual mistakes, it was difficult to gauge their performance. But that will change in Zolder.”

For Zolder, Martin will be at the wheel of a Valmon Racing Team Russia Aston Martin DBRS9 and eager to impress once more. Martin says the team is making steady progress. “We had a few technical problems with the Aston in Nogaro but we hope to be more competitive in Zolder and score some valuable points,” he said.

Another Belgian, Enzo Ide, a GT3 race winner in 2011, secured a hard-fought fifth in the Championship Race at Nogaro with Francesco Castellacci, the 2011 FIA GT3 European Champion, in the No.4 AF Corse Ferrari 458 Italia.

AF Corse announced their much-vaunted arrival in the FIA GT1 World Championship with the No.3 car of Filip Salaquarda (CZE) and Toni Vilander (FIN) grabbing pole position for the Qualifying Race. The pair eventually finished with two top-six places despite a drive-through penalty on Sunday for a false start. Both Ferrari pairings are tied for fifth place overall in the early-season standings.

The 2011 Zolder event was dominated by the German ALL-INKL.COM Münnich Motorsport team, with Marc Basseng and partner Markus Winkelhock combining to take victories in both races. This season the Saxony-based team switches from Lamborghini to the Mercedes SLS AMG in pursuit of further glory.

Basseng and Winkelhock (car No.38) will be buoyed by third place behind the Audis in the Championship Race at Nogaro. Nicky Pastorelli (NLD), the pole-sitter at Zolder in 2011, and Thomas Jäger are in the No.37 Mercedes. 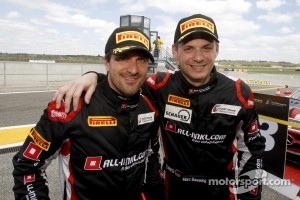 Team boss Basseng is hoping to take a further step forward in Zolder. “We made a good start to the season in Nogaro. We started in a similar way last season, so hopefully we can push for a win in Zolder,” he said.

The Reiter Engineering Lamborghini duo in the shape of Tomas Enge (CZE) and Albert von Thurn und Taxis (DEU) muscled in on the Audi act at Nogaro by taking third place in the Qualifying Race in their No.24 Lamborghini LP600.

Peter Kox (NLD) recorded the fastest lap in the Championship Race at Nogaro in a charge to seventh place which underlined the competitiveness of the Lamborghini. Kox is paired with China’s Darryl O’Young in the No.25 Reiter car.

The Vita4One Racing Team BMW outfit will look to the experience of FIA GT and GT1 champion Michael Bartels (DEU) to mount a recovery after an indifferent start in Nogaro.

Bartels is partnered in the No.18 BMW Z4 by Dutchman Yelmer Buurman. The No.17 car features Mathias Lauda and Nikolaus Mayr-Meinhof of Austria.

For the 2011 teams’ champions, Hexis Racing, electronic gremlins with the McLaren MP-12C scuppered their chances to get their defence off to a solid start. While Gregoire Demoustier (FRA) and Alvaro Parente (PRT) were fourth in the No.2 car in the Qualifying Race, it finished at the back of the pack along with the No.1 of Fred Makowiecki (FRA) and Stef Dusseldorp (NLD) in the Championship Race. Expect a riposte from the French team at Zolder.

Sunred Engineering flies the flag for Ford with Serbia’s Milos Pavlovic alongside the Italian Matteo Cressoni in the No.10 Ford GT with Spain’s Andy Soucek and Emmanuel Moncini (ITA) in the sister Ford GT. 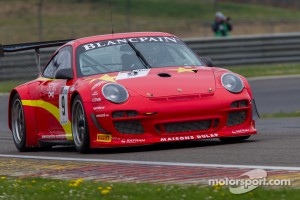 Frenchman Mike Parisy and New Zealander Matt Halliday are proving to be a formidable combination in the No.9 Exim Bank Team China Porsche 911 GT3 R. Top 10 finishes in both races. In fact Parisy was as high as fourth on Sunday until a drive-through penalty for a start infringement. Undaunted, Halliday brought the car up through the field to ninth at the flag. Parisy has his sights on a podium this weekend.

"I am actually impatient and motivated to the idea to confirm our competitiveness to the highest level, our objective clearly is to unhook this weekend our first podium in the FIA GT1 World Championship,” he said. “Having won on this extremely technical track in GT3 in 2010, my feeling as I approach this meeting is excellent."

The No.8 Porsche of Frenchman Benjamin Lariche and Chinese star Ren Wei will look to improve on 14th and 15th places respectively from Nogaro.

In the FIA GT3 European Championship opener at Nogaro, race honours were shared by the Heico Gravity-Charouz Mercedes of Maxmilian Buhk (DEU) and Dominik Baumann (AUT), the Race Two winners and the French pair Marc Sourd and Gregory Guilvert victors in Race One in the Sainteloc Racing Audi R8 LMS.

Both pairs can expect strong opposition at Zolder from Stefano Gai (ITA) and Michael Lyons (GBR) who were on the podium in both events in the No.51 AF Corse Ferrari 458 Italia.

Giuseppe Ciro (ITA), who partnered Gaetano Ardagna Perez (VEN) in the AF Corse Ferrari 458 Italia No.50 to second place in Race Two, has eyes for the podium in Zolder. “Having both Ferraris on the podium in Nogaro was great for AF Corse. We will chase the podium and more points in Zolder,” he said.

Buhk and Baumann (40 pts) hold a three-point advantage over Sourd and Guilvert heading to the second round. 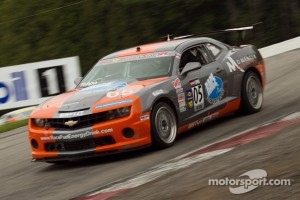 A formidable addition to the field for Zolder comes in the muscular shape of the Chevrolet Camaro.

The car is entered by Reiter Engineering who have been developing it during pre-season. It turned heads at the recent Balance of Performance test at Paul Ricard. German duo Max Sandritter and Philip Geipel will be tasked with taming the American beast in Zolder.

"It´s a big honor for me to race the Chevrolet Camaro GT in it's first international race,” Geipel said. “We raced this car already three weeks ago in Germany and since then, worked a lot on the performance and the reliability. I´m almost sure the Belgian fans love the Camaro, as for me with its deep V8 rumble, it´s by far the best sounding GT3-car.

“It will not be an easy weekend for us in Belgium, as the car is still very new and its long wheelbase might not the ideal for a tight and twisty track like Zolder. Personally, I´m very happy to be back in the FIA GT3-European Championship, were I have been successful already in 2010.

“Also my team-mate Max Sandritter is very excited, it´s his first international race and also his first time at Zolder. I´m looking forward to the weekend, racing together with the FIA GT1 World Championship will provide a very good event."

French squad Luxury Racing have also entered two Ferrari 458 Italias with the driver line-up yet to be revealed.