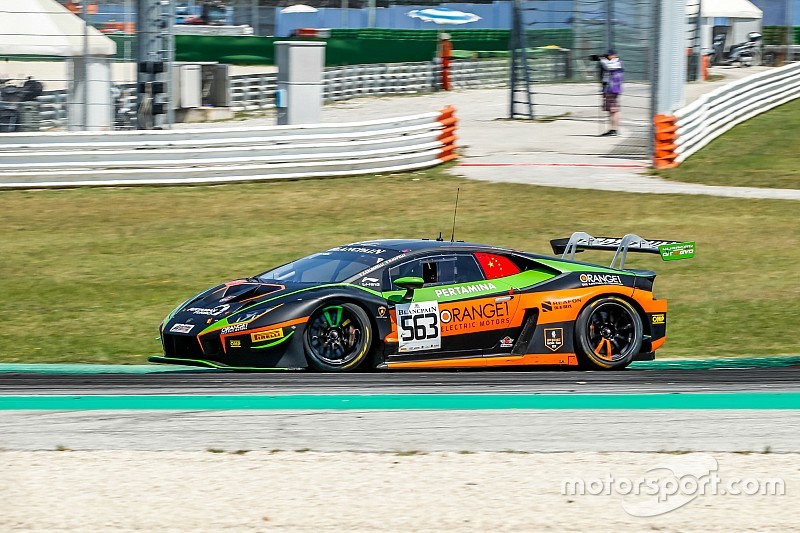 Caldarelli and Mapelli brought their #563 Lamborghini Huracan GT3 home just eight tenths of a second ahead of the #88 AKKA ASP Mercedes-AMG GT3 of Marciello and Vincent Abril, while Maro Engel and Luca Stolz completed the podium in the Black Falcon Mercedes.

Caldarelli started third but pulled off a terrific move round the outside of Ricky Collard’s Aston Martin at Turn 1 to take second behind the pole-sitting WRT Audi of Charles Weerts.

Eighteen-year-old Weerts led the early stages but was caught and passed by Caldarelli on the run down to the Curva della Quercia on lap five.

Weerts then spun out of the race at the high-speed Curvone turn after running wide, his beached Audi bringing out the safety car. This cancelled out an 11-second lead for Caldarelli over Abril, who had earlier squeezed his way past Collard.

The restart coincided with the opening of the pit window, and Caldarelli, Collard and the #26 Sainteloc Audi of Steven Palette all electing to come in. Quick pitwork allowed the #26, now with Markus Winkelhock at the wheel, to leapfrog the Aston Martin.

Mapelli maintained the #563 Lamborghini’s lead after the stops and headed Marciello, who took over from Abril, and Engel.

Further back, Winkelhock had been challenging Thomas Neubauer in the #89 AKKA ASP Mercedes for fourth, before losing his left-rear wheel at the penultimate corner.

The safety car was then deployed and remained on track for 10 minutes before racing resumed.

Caldarelli then had to withstand waves of attack from Marciello, but the latter could not get close enough to make a serious overtaking attempt and had to settle for second at the flag.

Engel came home a distant third, with Marvin Kirchhofer finishing just off the podium in fourth in the R-Motorsport Aston Martin he shared with Collard.

Fabian Schiller was the best-placed Silver driver, taking fifth overall in the #90 AKKA ASP Mercedes he shared with Timur Boguslavskiy, while Pro-Am honours went the way of Andrea Bertolini and Louis Machiels in the AF Corse Ferrari.

Mirko Bortolotti brought a damaged Grasser Lamborghini home sixth, after his teammate Christian Engelhart was hit by the Sainteloc Audi of Simon Gachet early on. Gachet received a drive-through penalty for his part in the incident but could not take it due to retiring with damage.