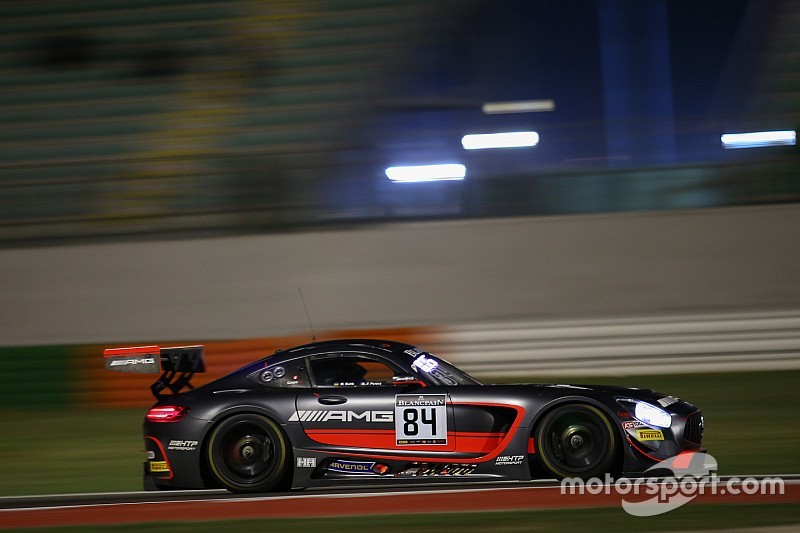 The #84 HTP Mercedes of Maximilian Buhk and Franck Perera claimed the victory in a dramatic Saturday qualifying race of the opening round of the 2017 Blancpain Sprint Series at Misano.

The duo won the race by five seconds ahead of its sister car, driven by Fabian Schiller and Jules Szymkowiak.

It was the Attempto Lamborghini of Marco Mapelli and Giovanni Venturini that had started on pole and held onto the lead on the first lap, before the race was red-flagged after just six corners following an incident involving the Audi of Will Stevens.

The WRT Audi car was launched sideways and started a chain reaction, which ended the race of six other cars.

The race was then restarted under the safety car, with Mapelli leading the field once again but a fuel pressure problem ended his race prematurely and gifted the lead to Buhk.

The German then went on to build a comfortable lead, and was unchallenged for the rest of the race.

Marciello was charging at the restart and tangled with Buhk’s former co-driver Dominik Baumann, causing a spin for the latter and an investigation for the former Ferrari junior, which was still ongoing at the end of the race.

Mirko Bortolotti’s Lamborghini also made the most of the restart to run in second place, with teammate Christian Engelhart continuing the form when he took over after the pitstop.

Engelhart was doing battle for fourth with the McLaren of Andrew Watson on the final lap of the race, when a collision with a backmarker saw all three cars spin off the circuit.

He ultimately finished in eighth whilst there was more disappointment for Watson, who finished 18th after an otherwise impressive outing.

Meanwhile, there were better fortunes for reigning Sprint Cup champions Enzo Ide and Christopher Mies in the #1 WRT Audi, the duo claiming sixth position at the flag, despite only qualifying in 18th.