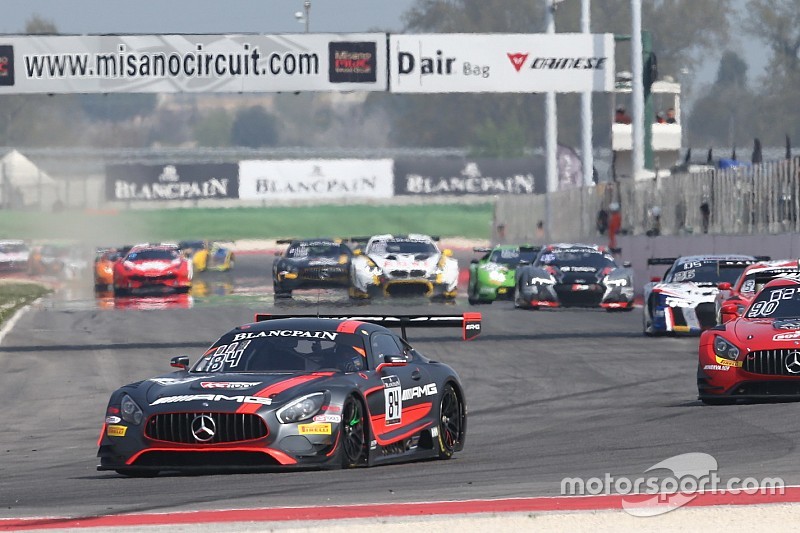 Maximilian Buhk and Franck Perera made it two wins in a row for HTP Motorsport in the opening weekend of the Blancpain GT Series Sprint Cup at Misano.

After claiming victory in the turbulent qualifying race on Saturday night, Buhk and Perera gave a dominant performance in the main race to score another win, crossing the line 24 seconds ahead of the rest of the field.

Behind them, there was jubilation for Bentley Team M-Sport, despite the fact they had lost the car of Andy Soucek and Maxime Soulet even before the start as a result of the qualifying race accident.

The Vincent Abril/Steven Kane Bentley pairing secured a hard-fought second place after leading a four-car battle in the latter stages of the race.

Kane managed to keep the resurgent Mercedes of Dominik Baumann behind in third, ahead of Daniel Juncadella for Akka-ASP and Christopher Haase in the Sainteloc Racing Audi in fourth and fifth respectively.

It was a better day for the BMWs of Rowe Racing also, who finished sixth and seventh with Tom Blomqvist/Phillip Eng and Jesse Krohn/Markus Palttala.

The Strakka Racing McLaren of Rob Bell and Andrew Watson was eighth, followed home by Mirko Bortolotti in ninth and the Team WRT Audi of Pieter Schothorst and Jake Dennis in tenth – a solid result on an otherwise disappointing weekend for the duo.

Reigning champion Enzo Ide suffered a spin early in the race, which meant partner Christoper Mies had a recovery drive to claim 11th.

There was also disappointment for Michael Meadows and Raffaele Marciello in their Akka-ASP Mercedes after their strong qualifying race performance, as they made a second unscheduled pitstop which demoted them from second to 19th in the main event.

Engelhart and Bortolotti win for Lamborghini at Brands