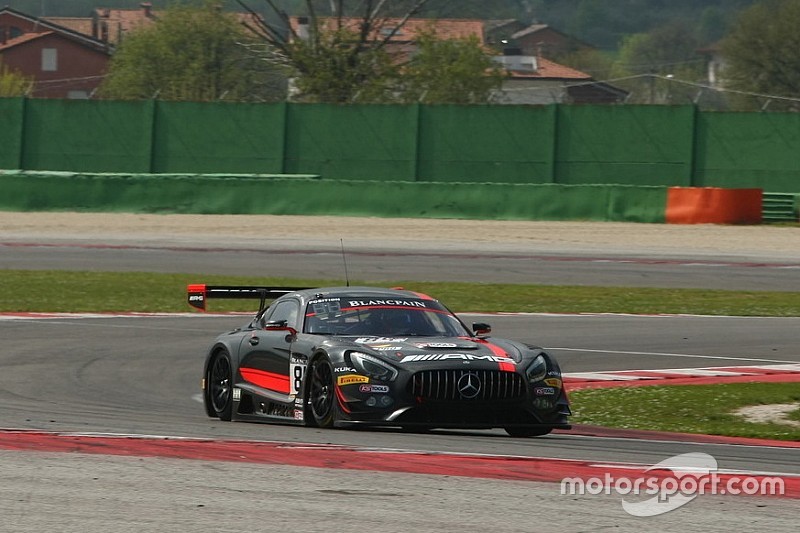 After the Italian double-header of Misano and Monza, Blancpain GT Series’ teams and drivers now head to Great Britain for back-to-back meetings at Brands Hatch and Silverstone.

First up is the former GP circuit in Kent, which hosts round three of the Blancpain GT Series and where HTP Motorsport drivers Maxi Buhk and Dominik Baumann are aiming to defend their slender lead in the drivers’ standings.

One pole position, two podium finishes: Buhk and Baumann did not require a win in Italy to claim top spot in the Blancpain GT Series drivers’ standings. The Austro-German pair finished second in both Misano’s main race and Monza’s endurance event (sharing the #84 HTP Motorsport Mercedes-AMG with Jazeman Jaafar in the latter) which, together with the points earned from the season opener’s qualifying race and Monza pole position, has helped Buhk and Baumann put a total of 39 points towards the combined championship.

It is an envious position but, for Buhk at least, the Brands Hatch meeting holds mixed emotions. He finished second the first time a Sprint round was held on the 3.916km-long circuit in 2014 but last year the reigning Sprint champion suffered a heavy shunt in Paddock Hill corner during the first free practice session. Indeed, such was the damage to his HTP Bentley that Buhk’s weekend was over. A good result at this year’s meeting could lay those demons to rest.

I don’t really think there is a home advantage for the British drivers.

He could do worse than follow the example of Laurens Vanthoor who achieved exactly that during the opening round at Misano. Only a couple of months after his horrific crash at the Italian circuit, the former Blancpain GT Series champion clinched victory aboard the #1 Belgian Audi Club Team WRT R8 he shares with Fred Vervisch. In Monza the Belgian duo - joined by Vanthoor’s younger brother Dries - was less successful; a difficult race and drive-through penalty consigned them to scoring a mere two points, dropping Vervisch and the elder Vanthoor to third in the overall standings, seven points behind Buhk and Baumann. Brands Hatch is one of Vanthoor’s better circuits, however, having claimed the grand slam of securing pole and victories in both the qualifying and main races last season.

Five points higher up the ladder is Monza race winner Rob Bell, who sits just two shy of top spot. The British driver took victory at the Autodromo in the company of Shane Van Gisbergen and Come Ledogar, but at Brands Hatch is again joined by regular Sprint Cup buddy Alvaro Parente aboard the #58 Garage 59 McLaren. Last year Bell scored a Brands Hatch podium finish in the 650S GT3 - then in the Attempto Racing colours - so expect him to feature at the front again.

Misano demonstrated that the level in the Blancpain GT Series Sprint Cup is very high. And with 37 cars on the grid - the Brands Hatch pit lane cannot accommodate more - it is possible that some ‘outsiders’ could produce a stellar result. Keep an eye out for British drivers such as Stuart Leonard and Michael Meadows (sharing the #2 Belgian Audi Club Team WRT R8), Steven Kane (Bentley), Sean Walkinshaw and Alex Buncombe (both Nissan), Martin Plowman and Craig Dolby (in the second of the Garage 59 McLarens), Jack Falla (Lamborghini) and Alexander Sims (BMW) who won last season’s British GT race there. All would love to shine in front of their home fans.

In the Pro-Am Cup all eyes will be on Michal Broniszewski who, at Misano and Monza, scored 59 out of a possible 60 points aboard his #11 Kessel Racing Ferrari. The Pole therefore enjoys a massive 40-point lead over the drivers in second. At Brands Hatch Broniszewski is again joined by Giacomo Piccini, with whom he was victorious in Misano.

Blancpain GT Series track action at Brands Hatch starts on Saturday 7 May at 09.40 local time. The opening day features two one-hour free practice sessions, while qualifying takes place at 17.00. On Sunday May 8th qualifying race starts at 12.05 before the main race gets underway at 16.20.

But that’s not all! For the first time this season the Blancpain Sports Club will be at full strength courtesy of both its Blancpain GT Sports Club - the GT3 championship reserved for Bronze drivers - and Blancpain Ultracar Sports Club, which brings the most exclusive hypercars to the Kent circuit.

Rob Bell (#58 Garage 59 McLaren): “So far our car has been competitive and we have huge confidence after our strong start to the year, but we have never been fantastic at Brands so will be looking to learn and improve on our past races there. I don’t really think there is a home advantage for the British drivers. Maybe if the weather is changeable our track knowledge will help, but the driver level in the Blancpain GT Series is so high that I am sure everyone is ready and able to challenge.”

Dominik Baumann (#84 HTP Motorsport Mercedes-AMG): "I am pretty surprised that we were so competitive in Monza. The car really suits us, it's a big step forward from the SLS and it is a bit better everywhere. What it will take to win? I guess we just have to keep on doing what we did in the first two races and try to see the chequered flag in every race. I have never been to Brands Hatch, so it will be a challenge for me to get to know the track as quickly as possible."

Alexander Sims (#99 Rowe Racing BMW): "In Monza we had a technical problem unfortunately, but there will not be any knock-on effects for Brands Hatch. In the Blancpain GT Series there are about 25 car/driver line-ups that I believe can win races, if all goes well for them. It’s incredibly difficult to single out any one. All I know is we will be pushing as hard as we can to put the BMW M6 back in the top-3 and be back on the podium."