Seyffarth Racing finished 8th in the qualifying race before finishing 4th in the main race.

July 07, 2013: Indian racing driver Karun Chandhok recovered brilliantly after an awful qualifying session to finish 4th in Round 3 of the FIA GT Series race in Zandvoort with his team Seyffarth Racing. The former Formula One driver, who is supported by JK Tyre and Tag Heuer, was joined by team-mate Jan Seyffarth as they qualified in 16th position. They finished 8th in the qualifying race before finishing 4th in the main race today.

The weekend started off well for the Indian as he finished 8th and 11th in the free practice sessions. Karun was confident going into qualifying on Saturday but the team struggled with lack of grip. Qualifying was a total struggle for Seyffarth Racing with the team finishing in a lowly 16th position. The race pace seemed to be a lot better for the team as they moved up the order in the qualification race to finish in a creditable 8th position, after starting in 16th. 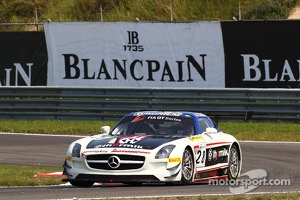 Chandhok commented, "I am extremely happy to finish in 4th after our qualifying position yesterday. We could not find any grip in qualifying and had to make a host of changes for the race. The changes seemed to work as the car was much better in the race. To move up from 16th to 8th in the race was excellent and the car felt great. I managed to set the 5th fastest lap in the race which clearly showed our car improved."

Chandhok started in 8th position for the main race and had a great start quickly moving up to 6th place at the end of the first lap. His team-mate Jan Seyffarth took over for the second half of the race and held off Alvaro Parente off Loeb Racing to finish in a brilliant 4th place.

Chandhok added "Today we started in 8th position and I had a great start and moved up into 6th place. After that it was tough as the cars ahead of us were much faster. Jan also drove well and did a great job holding off Parente in the last part of the race. After the Le Mans recovery it was good to have my best finish in the FIA GT Series."

The podiums keep coming for the Nismo athletes at Zandvoort