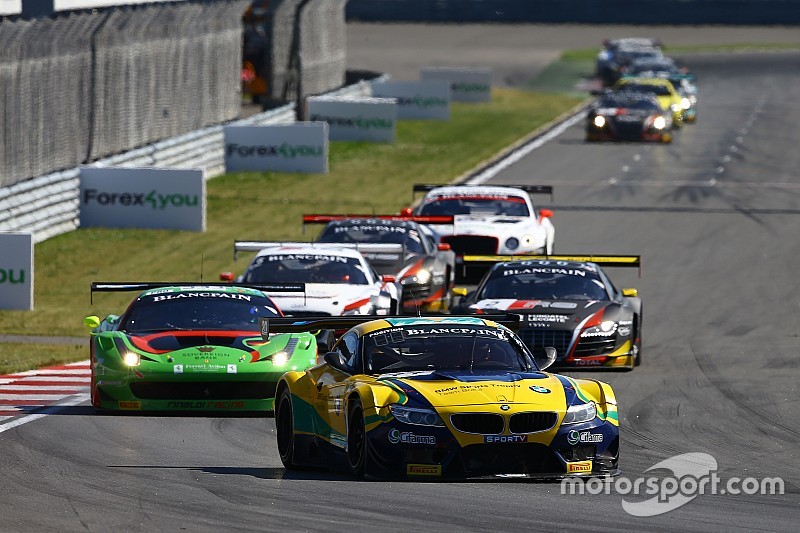 The Portuguese round is held at the Autódromo Internacional in Portimão.

The Algarve round of the Blancpain Sprint Series starts the second half of the 2015 season, with three rounds remaining on the calendar. With new winners in both the qualifying and main races of the Moscow round in early July, the fight for the teams and drivers titles is hotting up nicely.

In Moscow Lamborghini (#88 Reiter Engineering Gallardo of Albert Von Thurn und Taxis and Nick Catsburg) and Bentley (#84 Bentley Team HTP of Maxi Buhk and Vincent Abril) joined the ranks of race winners of the 2015 Blancpain Sprint Series, the fastest GT series on the planet, an exclusive circle which already counted BMW and Audi as its members.

Championship leaders Robin Frijns and Laurens Vanthoor had a difficult end of the first half of the season and with their #1 Belgian Audi Club Team WRT R8 they only managed a fifth place in the main race of the Russian round. That means that even though they had a perfect weekend in Brands Hatch and Zolder, the Belgian-Dutch pairing arrives in Portugal with just fifteen points in hand over the Bentley-duo of Buhk and Abril. With 102 points still to play for, an exciting second half of the season seems guaranteed.

A home race for the Brazilian squad

Especially since Maxi Buhk and Vincent Abril are not the only title rivals for series leaders Frijns and Vanthoor. Even though Valdeno Brito and Atila Abreu missed the opening round in Nogaro and have yet to stand on the top step of a rostrum in 2015, the Brazilian drivers are only 19 points behind the leaders. The Algarve round is held at the Autódromo Internacional in Portimão, which forms the European base of the BMW Sports Trophy Team Brasil. One might consider it to be a home race for the yellow-and-green machines, and Brito and Abreu will do everything it takes to conquer their first win of the season in Portugal.

It would be the second victory for the Brazilian squad however, since talented substitutes Dirk Müller and Maxime Martin opened the score in Nogaro. The 31 points scored in France come in very handy in the teams’ standings, where BMW Sports Trophy Team Brasil sits in second place, 16 points behind Belgian Audi Club Team WRT. However, the Belgian squad has the advantage of having three cars regularly scoring points – Stéphane Ortelli and Stéphane Richelmi are in fourth in the driver standings – whereas the Brazilians have to defend their chances with two cars.

Another duo vying for their first win of the season are Ferrari drivers Norbert Siedler and Marco Seefried. In 2015 their green Rinaldi Racing 458 Italia has been on the front two rows of the main race three times already – twice on the front row even – but due to bad luck and racing incidents the Austrian-German pairing only managed one podium finish, in Moscow. It is clear that the car and the drivers have a lot potential, so count on them to be at the sharp of the field in Algarve.

3rd round of the GT Sports Club

The Portuguese round of the Blancpain Sprint Series, which hosts also the 3rd round of the GT Sports Club, starts with an exhibition and a parade in Portimão on Thursday September 3rd. From 17:00 onwards the cars will be in front of the Santa Catarina Fortress, while the parade will start at 20:15. It will be followed by an autograph session with the Blancpain Sprints Series drivers.