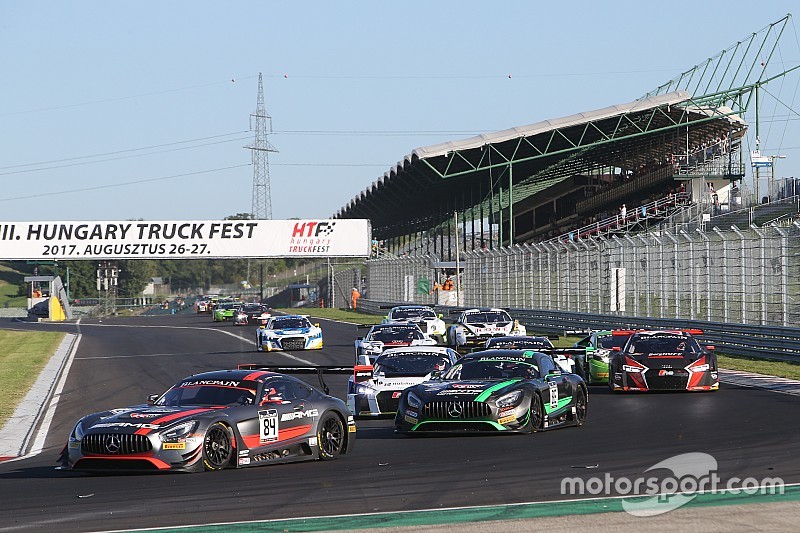 Maximilian Buhk and Dominik Baumann were victorious at the Hungaroring in the main race of the Blancpain Sprint Series, starting from fourth on the grid.

The race got off to a hectic start as front row starters Enzo Ide, Tristan Vautier and Frederic Vervisch all ran side-by-side exiting T1.

The former two touched on the inside line, resulting in Vautier running wide and also forcing Vervisch sligthly off track.

That allowed Buhk to sneak past all of them and lead from Turn 3 onwards.

The cars of Martin Plowman and Nicolaj Moller-Madsen both stopped on track soon afterwards, bringing out a lengthy full-course yellow stint.

Ide was demoted by WRT Audi teammate Vervisch at the restart and was closely followed by Vautier until the start of the pit window.

The top four pitted over the course of three laps, with the #84 HTP Mercedes retaining the lead in the hands of Baumann.

He was just a second in front of Laurens Vanthoor, who took over from Vervisch, with Saturday's winning car, now driven by Christopher Mies, a further couple of seconds down.

Baumann soon shook off Vanthoor to claim the win, with the latter coming under pressure from Mies.

However, there was no change in the order and the two WRT Audis were followed by another as the #28 machine of Rene Rast and Will Stevens took advantage of a poor pit stop from Vautier and Felix Rosenqvist.

The latter duo had to settle for fifth, with HTP's Jules Szymkowiak and Bernd Schneider securing sixth.

The #26 Sainteloc and the #4 WRT followed as the top eight included only Audi and Mercedes cars.

Following their win, Buhk and Baumann are up to second in the standings, 14 points behind Mies and Ide.

UPDATE: The #1 WRT of Vervisch and Vanthoor received a drive-through, converted into a 30-second time penalty, for unsafe release. They are only classified in eighth as a result, giving Mies and Ide second place. The final podium position was inherited by Rast and Stevens.

Four podium finishes for the Team WRT at Budapest