The Dörr Motorsport team from Germany is now complete and ready for the first race in the FIA GT Series in Nogaro, France. The two German drivers Arne Hoffmeister and “Paul Green” will compete in their McLaren MP4 12C GT3 #17 in the Gentlemen Trophy rating. Niclas Kentenich (DEU) and Daniel Keilwitz (DEU) in car #16 intend to score points in the strong Pro Cup rating. 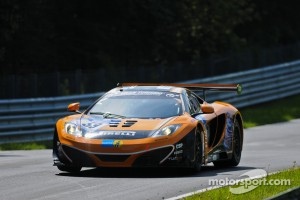 The drivers will get their first chance to race their GT3 car on the track on Friday. A two-hour first free practice session is scheduled for the afternoon.

The team and the drivers will use that time to optimise the McLarens and to make themselves familiar with the racetrack.

There will be another two-hour practice session on Saturday morning before the first real trial, the qualifying in the afternoon, when the start positions for the one-hour qualifying race on Sunday will be determined.

The results from that race will determine the start positions for the one-hour championship race on Monday.

Team Manager Uwe Isert: “We worked very hard in order to be able to take part in the FIA GT series. Now we are here with two cars. And we will see how the weekend goes.

At the moment I cannot say where we stand, we will know more after the start of the free practice sessions. Our first goal is for the drivers to make themselves familiar with the car and the track. Our second goal is for both McLarens to finish the race on Monday.”

Team Principal Rainer Dörr is looking forward to the first event of the new FIA GT series: “After a great many races at the Nordschleife we will now compete on an international level, in the new series of Stephane Ratel (founder and CEO of S.R.O.).

The McLaren MP4 12C GT3 is definitely a great car, which has previously competed successfully in GT series all over the world. We are a young team in the GT series and we will have a lot to learn.

Therefore, we cannot set ourselves ambitious goals for the race in Nogaro. We do not know yet what our competitors have to offer.

I am pleased with the media coverage for the FIA GT series. All championship races will be broadcast live by RTL Nitro, with RTL showing highlights of the GT races right before the Formula 1 broadcasts.

This is great for both our sponsors and our McLaren branch office in Frankfurt where we sell the street versions of the McLarens. We are the only McLaren retailer in the world who also manages a race-team.”

Nissan's racing season gets into gear with new series at Nogaro