Who will be leading the Blancpain GT Series after Silverstone? 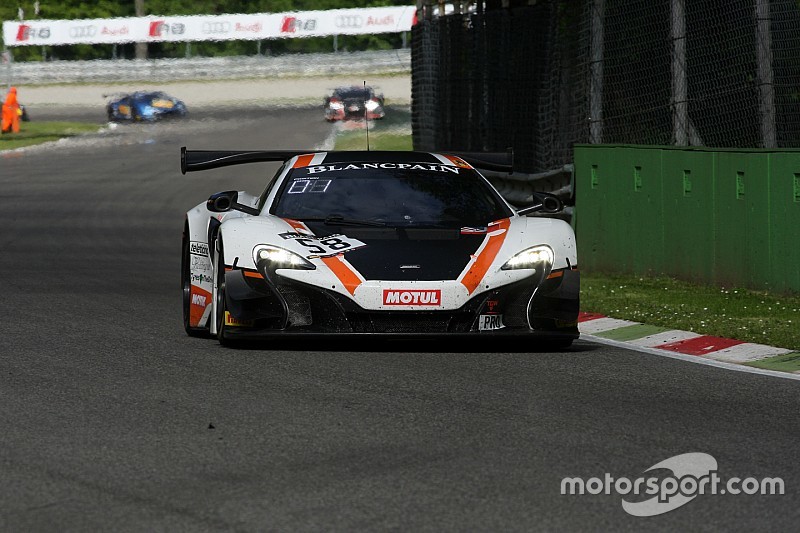 McLaren’s Rob Bell travels to the Home of British Motorsport as the new overall drivers' championship leader following the events at Brands Hatch.

The Silverstone Grand Prix Circuit plays host to part two of Britain’s 2016 Blancpain GT Series double-header this weekend. McLaren’s Rob Bell travels to the Home of British Motorsport as the new overall drivers' championship leader following the events at Brands Hatch, although the difference between the series’ best drivers remains small. Once again they will need to be amongst the fastest of the 54 entries assembled for Silverstone to maintain their position amongst the frontrunners.

It is not uncommon for different drivers to lead a championship’s standings after each of the first three rounds. However, it is unusual to do so without winning the previous race, save for the opening round of the season, of course.

We were just unfortunate at Brands, that is all.

But that is exactly the scenario Bell finds himself in ahead of Silverstone. The #58 Garage 59 McLaren driver moved up to second after winning at Monza with Shane Van Gisbergen and Côme Ledogar, before crossing the line fourth at Brands Hatch - sharing the car with his regular Sprint Cup co-driver Alvaro Parente - helped to establish his four-point lead in the standings. Chances are the Briton could become the first driver in 2016 to hold on to that position, for Silverstone is a circuit that suits the McLaren well. Indeed, it was at the same venue 12 months ago that the 650S celebrated its maiden Blancpain GT Series win with none other than Bell as part of its crew.

Second in the standings are Maxi Buhk and Dominik Baumann. The Austro-German pairing finished second in Misano and Monza, and would have loved to go one better at Brands Hatch. A small mistake in qualifying and penalty in the Qualifying Race meant the #84 HTP Motorsport Mercedes-AMG was only 18th on the starting grid for Sunday's Main Race, before inspired drives from both Baumann and Buhk helped it finish seventh and salvage some points. Jazeman Jaafar again joins the line-up at Silverstone.

#8 Bentley Team M-Sport Continental pairing Maxime Soulet and Andy Soucek have finished on the podium during each of 2016’s three race weekends - although their Misano rostrum came in the Qualifying Race - helping them to collect a creditable 38 points. Another podium finish in Monza - where reigning Endurance champion Wolfgang Reip joins as their co-driver - would confirm their status of title candidates.

Belgian Audi Club Team WRT won Sprint races at both Misano and Brands Hatch but is having a hard time getting its drivers to the top of the rankings. Best-placed are still Laurens Vanthoor and Fred Vervisch, despite their Brands Hatch tally being limited to the two units scored in the Qualifying Race. That means the Belgian duo - who are again joined by Laurens' younger brother Dries at Silverstone - are now fifteen behind Bell. So competitive is the series that it would be unwise to allow the deficit to grow any further.

Elsewhere, Michal Broniszewski is the runaway Pro-Am Cup leader after winning all three rounds thus far. The Kessel Racing driver is joined by Italian duo Bonacini/Rizzoli at Silverstone, but they will have a hard time repeating their Monza victory. Some teams that were a bit unfortunate around Italy's Temple of Speed will certainly be eager to considerably improve their points tally.

Plenty of British teams in the Pro-Am Cup will want to shine as well. Barwell Motorsport (Lamborghini Huracan), Team Parker Racing (Bentley Continental) and Nissan GT Academy Team RJN are aiming for podium finishes, while you can also count on the Motorbase-run but Oman Racing Team-entered Aston Martin to confirm its strong showing in Monza.

In Am Cup championship leaders Claudio Sdanewitsch and Stéphane Lemeret will be absent from Silverstone, leaving it to the Endurance Cup regulars to fight for the silverware. Even though six of the nine entered cars are Ferraris, the #87 AKKA ASP Mercedes-AMG of Vannelet, Beaubelique and Ricci showed in Monza that strength in numbers does not always guarantee victory. The crowd favourite will certainly be the #30 Team Parker Racing Bentley, with Top Gear star Chris Harris among its drivers.

Maxi Buhk (#86 HTP Motorsport Mercedes-AMG): "Brands Hatch did not give us the result we had hoped for, but it will not change the way we tackle Silverstone. We were just unfortunate at Brands, that is all. We have been performing well the whole season, and that has not changed. Judging by what I saw of the other cars during my stint, I think we have found a very good race set-up for the car."

Steven Kane (#7 Bentley Team M-Sport Continental): "Silverstone is always special for us. At our home race expectations are high, especially since our first win two years ago. But I like that a lot; it is what racing is about. From what I saw and felt around the back of Brands Hatch’s Grand Prix circuit - which has a lot of high-speed sections, just like Silverstone - our Continental GT3 should be good at Silverstone. I am very much looking forward to next weekend."