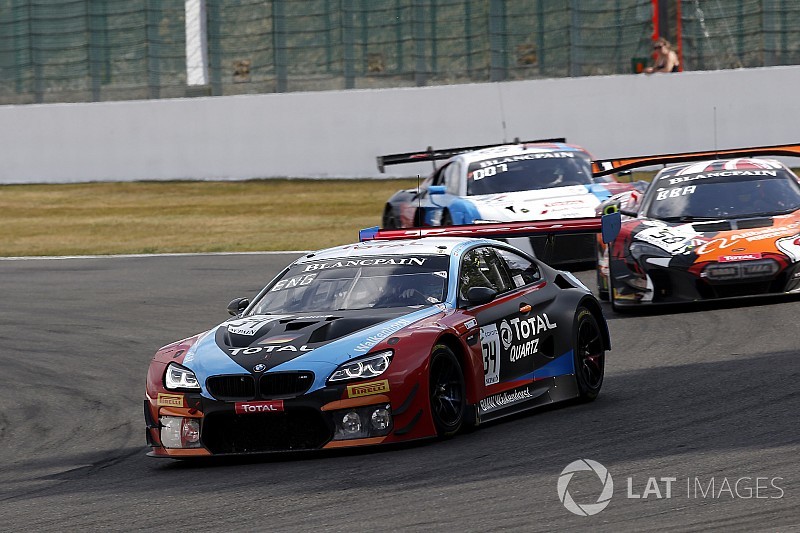 The Walkenhorst BMW driven by Philipp Eng, Tom Blomqvist and Christian Krognes came out on top in a tight late-race battle to win the Spa 24 Hours.

The Nurburgring-Nordschleife specialist, which was fielding a pro-class car in the Blancpain GT Series Endurance Cup for the first time this season, took the German manufacturer's third victory in four years in the classic Belgian event after prevailing over fellow BMW team Rowe Motorsport.

Nicky Catsburg, who shared the #99 Rowe M6 GT3 with Alexander Sims and Jens Klingmann, closed down on Eng before the BMW DTM driver was able to pull away into a 15s lead before the next round of pits.

The gap between the two BMW M6s was 20s before the final stops after which Sims came out with only half that deficit.

Rowe saved time by taking its final joker pitstop — one shorter than the regular 1m52s minimum — but the British driver was unable to make a further dent in the Eng's advantage.

Blomqvist said: "We're just a tiny privateer team who races around the Nordschleife; we put a pro car in and have gone and won the thing."

Sims had been under pressure from Frederic Vervisch in the third-placed Sainteloc Audi R8 LMS early in the final hour, before a slow lap from last year's winners as the car appeared to splutter out of fuel on its in-lap.

The seconds lost dropped the Sainteloc factory entry, in which Vervisch was joined by 2017 winners Markus Winkelhock and Christopher Haase, behind the Land Motorsport Audi in the final order.

Brothers Kelvin and Sheldon van der Linde and Jeffrey Schmidt, who completed the podium, had been in with a shout of victory until losing time with time penalty at their penultimate stop for a track limits infringement.

They lost any realistic chance of the podium when the car pitted under green flag conditions just before all their rivals took their stops under a full course yellow minutes later with three hours to go.

The best of the factory WRT Audis, the #2 car shared by Rene Rast, Robin Frijns and Nico Muller, was two laps down in eighth.

The sister car, which Dries Vanthoor had qualified on pole position before being excluded for a technical infraction, retired in the final hours with an overheating problem.

Bentley again missed out on Spa victory after having the pace to win with the new-for-2018 second-generation Continental GT3.

The #8 factory M-Sport entry driven by Andy Soucek, Maxime Soulet and Vincent Abril was in contention until a clash with an amateur-class Ferrari shortly after one-quarter distance.

The car retired on Sunday morning shortly after undergoing lengthy repairs after an on-track clash involving the Team75 Bernhard Porsche.

The sister Bentley came from the back after problems in qualifying to run in the top three in the hands of Steven Kane, Jules Gounon and Jordan Pepper until a holed radiator and problems with the right-rear corner dropped the car to an eventual 25th place.