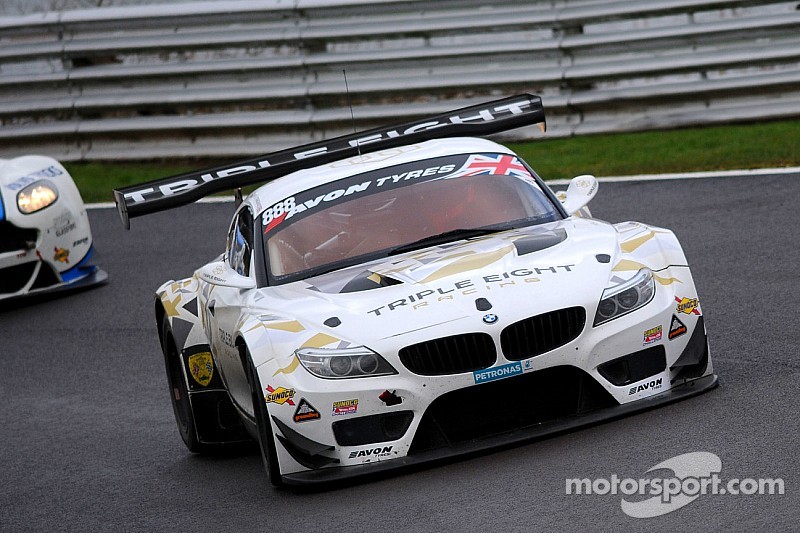 The world-famous Autodromo Nazionale Monza near Milan is the destination for the new-for-‘15 Groundhog-liveried Triple Eight Racing BMW Z4 GT3, as the Blancpain Endurances Series gets underway this weekend (11-12 April) in Northern Italy.

With experience of the series from 2014 (Silverstone and Nurburgring), Triple Eight Racing and it’s drivers Joe Osborne, Ryan Ratcliffe and Lee Mowle head into their first full season of the top European GT series together, determined to deliver a strong performance across the five rounds.

For 25-year-old Osborne, 2015 marks a change. Following a very competitive Pan-European season in the MP-Motorsport AMR Aston Martin V12 Vantage, he switches to his British GT steed, the 4.4-litre V8 Z4, and will lead the driving effort of the British squad.

This circuit isn’t the best for the BMW, but it was a very quick and reliable car last year and took some good results,

Together, Osborne and Mowle showed encouraging pace last weekend at Oulton Park in the British GT opener, where in an action-packed pair of sprint races, the pair took third and fifth place finishes. Meanwhile, Monza will give 21-year-old Ratcliffe his first competitive race outing since December, where he competed in the GTC class of the Gulf 12 Hours.

Competition will be tough this weekend, in Italy as there are over 60 entries for the opening event, and no less than 22 cars entered in the Pro-Am Cup class, in which Triple Eight Racing competes. With three other BMW Z4s entered and seven other leading sportscar brands represented, including nine Ferrari 458 Italias, a good result will be hotly contested.

The Autodromo Nazionale Monza cuts through a glorious parkland setting and features two long straights: The back straight leads from the Ascari Chicane to the Parabolica Curve and is 958m long. The main straight, which connects the Parabolica with the first chicane, has a length of some 1,194m and gives the powerful GT3 cars a real opportunity to stretch their legs.

Nicknamed ‘the temple of speed’, Monza is immersed in a rich motorsport history, steeped in tradition, atmosphere and passion. Above all, Monza is the one place on the calendar where the team’s BMW Z4 GT3 will reach its highest maximum speed of the year.

With a low downforce set-up being a key requirement on this track, the drivers’ skills will be put to the test both in the high-speed corners and under heavy braking, while acceleration out of the low-speed chicanes is a must.

After a busy Saturday of practice that includes four hours of track time for the team, Sunday begins with qualifying at 15:10 BST (16:10 CET), before the race itself begins at 13:30 BST (14:30 CET). All of the action will be covered live on the series website, and by delayed coverage on Sunday afternoon on Motors UK and Motors Europe from 19:30 BST / 20:30 CET.

Lee Mowle, Triple Eight Racing driver: “It’s great to be here at Monza. It’s a special track and I think come race day the atmosphere will be electric. It has to be said though that it’s a shame the weekend is so compacted. It would’ve been good to have a few laps on Friday to acclimatise and to have an opportunity to think and gather my thoughts before practice, but it is what it is. This circuit isn’t the best for the BMW, but it was a very quick and reliable car last year and took some good results, so hopefully that won’t have changed much this year.

There’s a different compound Pirelli tyre for 2015, that might not be quite so kind to the BMW, but we just have to go out there and come Sunday morning we’ll know who is where. After last weekend (British GT) we know that anything can happen so we’re just looking for a solid start, then we’ll go for the win next time out! (Sic)”

Joe Osborne, Triple Eight Racing driver: “It’s our first time at Monza as a team, which is cool. Last year I was the one out in Blancpain with a different team, telling the guys at Triple Eight how good the Blancpain series was, and here we are together. As the most experienced of the three drivers I’ve got to take the lead, helping make sure the team are on top of the regs, so we sail as close to the wind and get the most out of the car and team as possible.

I’m really enjoying it and looking forward to seeing where we are in the food chain. I don’t think there’s much expectation on me from the outside world, but nobody puts a greater stress on my pace than I, so I know usually that if I’m happy, probably everyone else is happy with me too; I’m self critical enough to know when I need to improve.

This weekend we don’t know where we are in the food chain or with BOP, so I think we have to look at the fellow BMW entries in our class and try to beat those. WE know Monza isn’t going to be brilliant for the BMW, but we just don’t know where we are. I think TDS are very experienced and they have a very good line-up.

Barwell almost won the championship last year and arguably have a more experienced line up in their Ecurie Ecosse car too, and the Russians we don’t know too much about. If we’re up there with the BMWs, then we should be up there full stop. Monza isn’t great, it’s a few long straights with some corners in the middle; it’s no Rockingham for example (Sic).”

Ryan Ratcliffe, Triple Eight Racing driver: “As I’m fairly new to a lot of European tracks, every one I go to I tend to think ‘Yup, this is my new favourite track’, but I came here before driving at Paul Ricard and I still think this is my favourite so far. The history of the track and the banking gives it a very special feel. The boys had a really good start to their British GT season last week; I think we’ve now proven that we have a better race car this year than we had last year. There are some long races in this series and I think we have a very good car in race trim, so I’m really looking forward to it.

This is actually my second weekend in Blancpain, but we won’t talk about the first! It’s going to be my first long distance race in a GT3 car, and I’m looking forward to doing longer stints and getting my foot in with the car. We’re in it to win it, but I personally just want the experience of the European tracks and a couple of class podiums. Myself, Joe and Lee all have the ability to do well, but I hope we’ll be on of the car at the front of the Pro-Am field come the end of the year.”