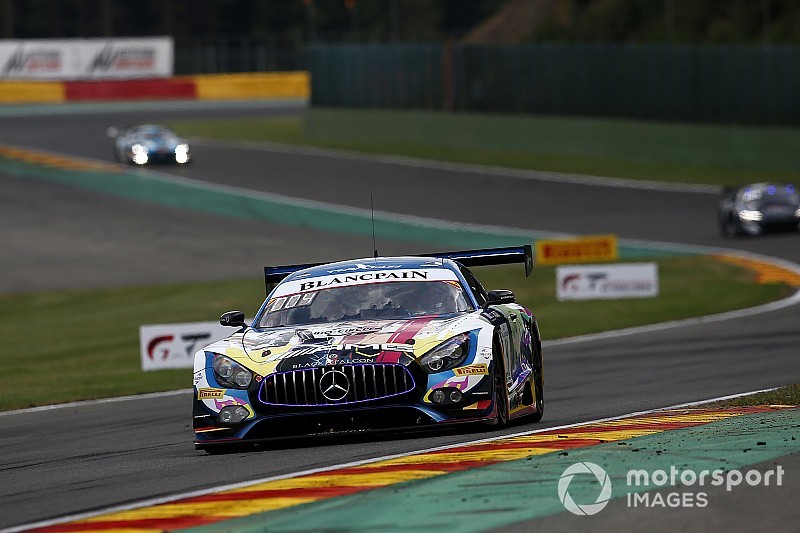 The Black Falcon Mercedes squad topped the times in first qualifying for the Spa 24 Hours ahead of the superpole session that determines the first 20 places on the grid.

Factory drivers Maro Engel, Yelmer Buurman and Luca Stolz claimed the provisional pole for the blue-riband Blancpain GT Series round in the aggregate session on Thursday evening with a 2m19.750s average aboard their Mercedes-AMG GT3.

That put them 0.081s up on the 2m19.651s average of WRT Audi drivers Dries Vanthoor, Alex Riberas and Frank Stippler.

Buurman, who set the quickest lap of the multi-part session with a 2m19.231s, said: "The most difficult part is getting a clear lap with 72 cars on track.

"The team did well to put me out on track at the right time and from then on it was about doing what you like doing — pushing really hard. It was a good, fun lap, but this session is maybe not about pushing for the last tenth."

Vanthoor set the second fastest qualifying lap across the sessions aboard the best of the factory WRT Audi R8 LMS GT3s. He posted his 2m19.238s on the opening run for the car, despite the fuel load being at its heaviest.

That was just a tenth up on the best of the factory Rowe Porsche 911 GT3-Rs shared by Frederic Makowiecki, Patrick Pilet and Nick Tandy, which ended up on a 2m19.935s aggregate.

The FFF Racing entry shared by Dennis Lind, Andrea Caldarelli and Marco Mapelli took sixth place as the only Lamborghini Huracan GT3 Evo to make it through to the superpole session.

The Attempto Audi driven by brothers Steijn and Pieter Schothorst and Mattia Drudi took seventh spot and is assured of the Silver Cup pole.

Best of the Aston Martin Vantage GT3s was the R-Motorsport example in which Marvin Kirchhofer, Alex Lynn and Jake Dennis ended up 14th in the times.

Just behind the Aston was the only Nissan GT-R NISMO GT3 to make the cut, the KCMG car shared by Katsumasa Chiyo, Tsugio Matsuda and Joshua Burdon.

Bentley just missed out on a place in the superpole runs on Friday. Best of the four-strong fleet of factory M-Sport Continental GT3s was the car shared by Jordan Pepper, Steven Kane and Jules Gounon in 21st position.

BMW, winner of the Belgian 24-hour classic last year, also failed to get a car through into superpole.

The Schnitzer-run M6 GT3 of Martin Tomczyk, John Edwards and Augusto Farfus ended up as the best of the German manufacturer's cars in 31st place.

The 30-minute superpole session that sets the first 10 rows of the grid takes place at 7:05pm local time on Friday.